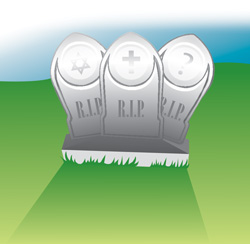 With Halloween now just a dearly departed memory, let’s keep the cemetery vibe alive just a bit longer to examine some recently unearthed lawsuits that indicate how our own dearly departed might be kept from truly resting in peace.

For places that are supposed to be all about eternal tranquility, cemeteries lately have been haunted by accusations of incompetence, malfeasance and—sometimes quite literally—skullduggery.

The death industry, in general, is not exactly overburdened with regulations. Critics contend that barbers and manicurists, in some jurisdictions, face greater regulatory hurdles than do operators of funeral homes and cemeteries. Some operators seem to view this relative lack of oversight as a license to make some extra bones on the side.

One particularly ghastly scheme was brought to light in 2009 at Burr Oak Cemetery in Alsip, Ill., a suburb of Chicago. Four workers there were accused of reselling grave sites and disinterring existing remains to make room for new coffins. The ringleader was sentenced in July to a dozen years in stir.

But incompetence and lax recordkeeping appear to be the most common reasons why the industry sometimes makes it difficult for the deceased to have a placid afterlife.

A Chicago man, Byron A. Morrow Sr., sued Taylor Funeral Home alleging his mother was improperly embalmed, resulting in fluid leaking from her head during the funeral. (Awkward!) He also claims that her oversize casket was damaged by being forced into a too-small grave at the cemetery.

Morrow is seeking more than $50,000 in damages, though that’s a mere drop in the urn compared to what is being sought by two sisters from Queens.

Evelyn and Hortense Edwards say they’ve been paying respects to their mother since 1990 at one of the plots they purchased at Rosehill Cemetery in Linden, N.J., only to discover that the grave actually contains the remains of a man.

So for all those years, they say, they’ve been bringing flowers for, praying over and having private conversations with a total stranger.

The sisters want their mother disinterred for identification, but the cemetery has refused unless they take financial responsibility for damages that may occur in the process.

They are suing the cemetery for breach of contract and figure $25 million should cover their emotional distress, which is the basis for another funereal lawsuit.

James Elser and Shannon Aradillas expected to hold a funeral service in Georgia for their mother, Sylvia Wallace, who died in April at a Wichita Falls, Texas, nursing home. Due to a funeral home mix-up, Wallace was placed in a casket and buried in a Texas cemetery at a ceremony intended for another woman.

Elser and Aradillas then had to view their mother’s exhumed remains for ID purposes. That’s where the emotional distress comes in, though their August lawsuit refers to it as “extreme mental anguish.”

It’s been said that funerals are for the living, though it seems like we need to show a little more consideration for the dead.