Half Off: Nevada Lawyer Bets on Discount Model 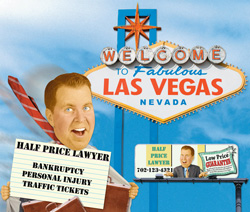 Rival lawyers may snicker when they see ads for Half Price Lawyers, a discount legal services firm run by Las Vegas attorney Adam Stokes. “They love us or they hate us,” says Stokes, a serial entrepreneur with a penchant for taking the cost out of business operations.

Stokes may be having the last laugh. Half Price Lawyers, which pledges to undercut the price of any legitimate competitor in the Vegas market, appears to be gaining momentum—and not just as lawyers of last resort.

Half Price Lawyers, just a stone’s throw from the city’s courthouse, has grown to become the third-largest bankruptcy firm in Nevada, according to Stokes. It also handles matters such as personal injury and immigration.

“It’s not a big, stuffy law firm where people are afraid to go,” says Stokes, who manages the no-frills operation with his wife, Christine, a bankruptcy lawyer. “They need to feel comfortable they’re going to get help for the problems they’re having, not nervous they’re going to get worked over.”

The law firm is the latest in a string of ventures for a Las Vegas native who has long tested his business acumen, even running a pickup-and-delivery laundry service and a storage business while pursuing a joint MBA and JD.

“We are into the science of law firm management and creation,” says Stokes, an admitted quantitative geek.

On any given day more than a dozen experienced lawyers, both staff and contract, help churn cases through Half Price Lawyers’ doors in a fashion Stokes proudly likens to a factory production line. Staff members have clearly delineated tasks and lawyers are grouped into defined practice areas. He has specially designated intake lawyers to screen potential clients. Clients are issued separate retainer agreements for each matter. And Stokes constantly re-evaluates his process to trim costs.

“You see so many small law firms that struggle with cash flow,” he says, arguing low price doesn’t translate to low quality. “We run a very efficient operation.”

While he won’t disclose his advertising budget, Stokes admits to pumping significant resources into vox populi-style promotions. His website, at halfpricelawyers.com, prominently displays his picture and a video testimonial that promises a low-price guarantee and payment plans starting at $100.

And lest you’re hoping this discount setup is an anomaly suited just for the strange vicissitudes of Sin City, think again.

“We should definitely expect a trend toward a lower-priced legal business model because the number of suppliers is increasing and because more efficient ways of delivering legal services are emerging,” says Jordan Furlong, an Ottawa, Ontario, consultant to law firms.

That may be tough medicine for those who still favor the billable hour.

Stokes, meanwhile, remains steadfast in his mission, eventually planning to roll out the model in other areas of the country.

“I will single-handedly drive down the pricing on legal services in this city,” he says.

The art that accompanied “Half Off,” July, page 28, was not intended to be a likeness of Adam Stokes or his law firm. The Journal regrets any confusion that the illustration may have created.