Once in prison for life, this New Jersey lawyer's story has inspired an ABC TV series 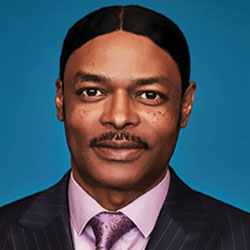 In 1991, a Somerset County, New Jersey, jury decided Isaac Wright Jr. was a drug kingpin and sent him to prison for life plus 70 years on related charges. Except Wright didn’t do it—he was framed by the very prosecutor arguing the case against him. Wright spent the next seven years studying law from his maximum-security prison cell, eventually proving his innocence and winning his freedom. He achieved significant legal victories for 20 of his fellow inmates along the way.

Sounds like the perfect plot for a TV show, right? That’s exactly what rapper/TV producer Curtis “50 Cent” Jackson thought when he heard Wright’s story. Jackson assembled a team to adapt Wright’s story, and the fictionalized drama, For Life, debuted in February on ABC.

But there’s more. To overturn his convictions, Wright first won a state supreme court case for another inmate, which he then used to invalidate his own kingpin conviction. The remaining convictions crumbled after a dramatic court hearing where Wright got a veteran police detective to admit he’d lied to the jury in Wright’s original trial.

Later, both the judge and the prosecutor involved in Wright’s original case were investigated by federal authorities for crimes unrelated to Wright’s case, including tax fraud and embezzlement. Both were convicted. The judge ended up disbarred and in prison; the prosecutor killed himself rather than serve time.

Wright was pro se when he did his trial from prison, unlike his TV persona. He spent seven years post-release earning back-to-back undergraduate and law degrees. Today, Wright is a litigator with the Newark, New Jersey-based firm Hunt, Hamlin & Ridley, primarily practicing criminal law. He also founded the Isaac Wright Jr. Network for Justice, which upon its completion will be a searchable national online database for legal and social justice nonprofits.

Congratulations on the show! How has its success impacted your daily life?

It’s all been positive, but it has increased the burden a thousandfold in a number of different ways. We have a huge firm, and we have a lot of attorneys who are very experienced, very competent and very aggressive, but everyone who calls wants Isaac. A lot of them don’t really need me, but they want me. I take a lot of pro bono cases, and I always have to balance my pro bono cases with my paying clients because this is a law firm—this is a business.

How involved were you in bringing For Life to life?

I was extremely involved. I was there pitching it to ABC, and I sat with the writer as he was developing the idea around my story. I read every script, and I was right there while it was being filmed.

Was it weird to see your life story transformed into fiction?

One of the things I learned early on—and had to deal with early on—was the issue of liberties. During the time I spent with the writer, I got to understand and be comfortable with the liberties. For example, the pilot is based on a client I actually helped get out of prison while I was in prison, but I was not able to argue the case.

Let’s talk more about your courtroom advocacy before you were a lawyer. You represented yourself at trial. Did you have previous legal experience?

How did you figure it all out? Was there an “aha” moment when you realized how it all fit together?

Once I made the decision to represent myself, I knew that I was very, very far behind in learning, understanding and in skills. I just went on a quest and spent 16 to 18 hours every day teaching myself the law. It was a very onerous undertaking. But one of the things I realized early on is that the holdings of the courts are separated by key numbers. I went through the entire library in seven years, just reading key numbers. Now when I read a case and a factual issue would come up, I recall holdings that are associated with that factual issue.

Did you think you would win your jury trial?

No. That was one of the reasons I made that decision. The day I was arrested, the police brought this guy to see me. He was in a suit, I thought he was my attorney. But he said, “I just wanted to come here to introduce myself. I am Nicholas Bissell, the chief prosecutor, and I am trying your case personally.” That was major. A head prosecutor got out of his bed in the middle of the night to come tell me that he was going to be trying my case personally. I knew at that point that I was in a lot of trouble. Later, after seeing the corruption, the lies, the false police reports … there was no doubt in my mind that I was going to prison for something I didn’t do, and no one was going to be able to prevent it.

So your strategy was to create a record for appeal?

Yes, that was my entire strategy. Once I understood what was going to happen—that I was going to prison for life—my end goal was making sure they wouldn’t be able to keep me there.

You weren’t the only person victimized by Nick Bissell. Was there an investigation underway before that pivotal hearing when the detective in your case recanted?

Early on, there was some information I had obtained regarding the corrupt activities of Bissell and my trial judge. I had written this information down and shared it with a few of my co-defendants during a visit to the library. What I didn’t know at the time was that one of them was an informant. After we left the library, I came back to my cell. I couldn’t have been there five minutes before the prosecutor sent officers to my cell and rushed in. They threw me on the cell floor, cuffed me and searched my cell. They found the information. But I had memorized it. After I got convicted, I put in a motion for bail pending appeal. By the time I put in this bail motion, I knew it was going to be denied. But I also knew there would be reporters in the courtroom. So just as the judge was denying the motion, I started shouting out in the courtroom all these things that I had discovered about Bissell and the judge—the things from the note. The reporters wrote about it, and once it was in print, people started coming out. Then more prominent people started coming forward, and [the authorities] … started the investigation. By the time I got to the hearing 7½ years later, a lot of that stuff was already out about the prosecutor and the judge, and ultimately, even more came out during that hearing.

After you passed the bar, the state supreme court’s Committee on Character took nine years to approve your bar admission. Did you anticipate it taking so long?

I had no idea. I knew it was going to be tough, but everything had been dismissed and my record was clean, so I literally thought, at the most, it would be maybe six months to a year. Around year eight, I cold-called a retired state supreme court justice who had ruled in my civil case, holding the state liable for prosecutorial misconduct. She was upset about what was going on. She said she couldn’t represent me because of conflict of interest, but her husband would. Within six months, I had my license. There’s a picture of me taking the attorney oath, and she’s the lady giving me the oath. She was able to swear me in.

After your admission, you could have gone anywhere. Why did you stay in New Jersey to practice criminal law?

I left a lot of people behind who didn’t belong where they were at. I looked at what God did for me as a sign that I had to give back. I have my freedom, I have regained my success. At this point, I think the journey, what I have gone through, the way I have been delivered, and my trials and my tribulations were for a purpose—for me to go back and deliver those who could not deliver themselves. I am going to live and die in the trenches.

This article appeared in the June/July 2020 issue of the ABA Journal under the headline: “Reversal of Fortune: He was once in prison for life, but now this New Jersey lawyer’s story has inspired an ABC TV series.”