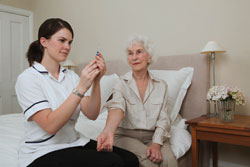 “The reality is: No one outside the court knows” how close the precedent came to be overruled, says William Messenger. Photo by Cultura/AP Images.

A case about a group of Illinois home-care aides who did not want to pay a union’s collective-bargaining fees did not attract much attention when the Supreme Court granted review last October.

The case of Harris v. Quinn was still a sleeper when it was argued in January, though by then it was clear that the stakes were high—not just for the parties but also for the nation’s public-employee unions. And the case even held implications for mandatory bar association dues from lawyers, the justices were told.

By the time Justice Samuel A. Alito Jr. announced the court’s 5-4 decision in Harris on the last day of the term—the same day as his much-debated majority opinion in Burwell v. Hobby Lobby Stores Inc.—labor organizations were on edge. They were bracing for the court to overrule a key precedent that permits public-employee unions to collect service fees from those who object to joining the unions.

In a separate case two years ago, Justice Alito had effectively invited a direct challenge to Abood v. Detroit Board of Education—the 1977 precedent on agency fees—in which the court upheld a Michigan law that designated a single union as the exclusive bargaining agent for Detroit teachers. The court said teachers in public school districts could be required to pay compulsory union fees for collective bargaining, whether they joined the union or not, because the system promoted “labor peace” and eliminated “free riders.”

In the end, Alito’s opinion stopped short of overruling Abood. The court held in Harris that a union could not collect fees from objecting home-health workers because they were not full-fledged state employees. The court based its ruling on the complex relationship with the state program that funds home-health workers and the clients for whom they work.

“While we do not overrule or affirm Abood,” Justice Alito said in court June 30, “we refuse to extend it” to the Illinois home-health workers. His opinion was joined by Chief Justice John G. Roberts Jr. and Justices Antonin Scalia, Anthony M. Kennedy and Clarence Thomas.

“The reality is: No one outside the court knows” how close the precedent came to being overruled, says William L. Messenger, a lawyer with the National Right to Work Legal Defense Foundation in Springfield, Virginia. “The scary thing is we will probably never know.”

Judith A. Scott, the general counsel of the Service Employees International Union, says that “there was a huge debate occurring within the Supreme Court about whether they were going to take the extra step of throwing out Abood.”

Messenger argued the case for eight home-care aides under the Illinois program who objected to paying service fees to their union, a unit of the SEIU. Some of those objectors serve as personal assistants under a Medicaid-funded state program designed to keep people with certain disabilities out of institutions by providing them with help to live at home.

Illinois pays some 20,000 workers, mostly women, to serve this function, though they are considered jointly employed by the state and the person they help. Pay and working conditions were generally poor for the home-care aides until 2003, when Illinois allowed them to unionize under its public-employee collective bargaining law. The aides did so, and pay and conditions improved.

But there were some workers who refused to join the union and objected to paying a service fee for representation.

Two years ago, in Knox v. Service Employees International Union, the court ruled 5-4 that public-employee unions had to get nonmembers to opt in to special assessments in certain cases. It was a relatively minor defeat for the unions, but it was the latest in a series of cases in which the court’s conservatives had ruled against them on the rights of nonmembers.

Writing for the majority in Knox, Alito invited challenges to the status quo in public-employee unionism when he said that Abood was an “anomaly” of First Amendment law, and that allowing unions to collect any fees from nonmembers impinged on their rights of free speech and association.

The National Right to Work Foundation picked up on the signals, using its pending Illinois case to ask the court to overrule Abood. The SEIU, joined by teachers’ unions, other labor organizations and President Barack Obama’s administration, urged the court not to disrupt the long-settled Abood precedent and to uphold agency fees for the objecting home-care aides.

In Harris, Alito considered at great length the questionable foundations of Abood and the practical problems it has engendered in the public-employee sector. But he ultimately concluded that the home-care aides “are quite different from full-fledged public employees” and thus the court need not overrule Abood but merely would not extend it to cover their situation.

Justice Elena Kagan, in her dissent—which was joined by Justices Ruth Bader Ginsburg, Stephen G. Breyer and Sonia Sotomayor—said the majority was “taking potshots at Abood,” but that the precedent’s rule was “deeply entrenched and is the foundation for not tens or hundreds but thousands of contracts between unions and governments across the nation.” 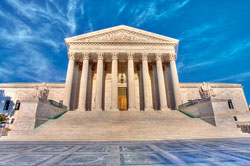 Harris v. Quinn: The First Ammendment prohibits the collection of an agency fee from home health-care providers who do not wish to join or support a union.

The dissenters would have extended it to cover the workers in the Illinois program.

The SEIU’s Scott says the Harris decision shows how the court’s conservative majority is “isolated from the regular workplace.”

“This decision really undercuts these women, who have effective representation in the workplace,” she says.

Catherine Fisk, a law professor at the University of California at Irvine who specializes in labor law, says it is unclear how far the court’s rule excluding quasi-public employees such as the home-care aides from Abood’s regime might be taken.

“What is it about that group that has greater First Amendment rights than teachers, sheriffs, park rangers or DMV workers?” she says. “There’s no functional or policy basis on why this rule works.”

While some in the legal community suggested Alito’s opinion extends the groundwork for overruling Abood, a counterargument suggests the court may be at the precipice but is not poised to take the next step.

“I think if there were five votes to overrule Abood, the court would have done it in Harris,” Fisk says.

Charlotte Garden, an assistant professor at Seattle University School of Law who helped write an amicus brief on the home-care workers’ side on behalf of a group of labor law professors, agrees.

“I subscribe to the view that the court isn’t going to be anxious to take another one of these cases,” she says.

Messenger from the National Right to Work Legal Defense Foundation disagrees. “What the five-member majority might be saying is: ‘Look, we’re giving you a warning,’ ” he says, adding that unions and others supporting Abood “aren’t going to be able to say they didn’t see [its demise] coming.”

The foundation has at least one case that could make its way to the Supreme Court for a fresh challenge to Abood. Meanwhile, other legal groups are behind a direct challenge to Abood in California over service fees charged by teachers’ unions.

On a separate note, the Harris case raised at least a question about how changes to doctrine in this area might affect mandatory bar association dues.

“By asking this court to overrule Abood, [the objecting home-care workers] necessarily ask this court to overrule” Keller v. State Bar of California, the SEIU argued in its merits brief. That 1990 Supreme Court decision upheld mandatory dues for ethical issues and attorney discipline for members of an “integrated” bar—one in which membership and dues are required as a condition of practicing law.

Alito, in his Harris opinion, considered whether even the refusal to extend Abood to the home-care workers (as opposed to overruling it) called Keller into question. It did not, he said.

Such bar dues are part of a regulatory scheme of ethics rules for licensed attorneys, Alito said, and “states also have a strong interest in allocating to the members of the bar, rather than the general public, the expense of ensuring that attorneys adhere to ethical practices.”

“Thus,” he said, “our decision in this case is wholly consistent with our holding in Keller.”

This article originally appeared in the September 2014 issue of the ABA Journal with this headline: “Division of Labor: Home-care aides don’t owe union fees, but court stops short of overruling a key precedent.”