How should states regulate drones and aerial surveillance? 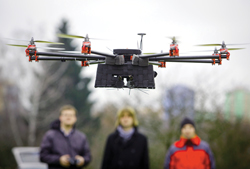 Drone technology has outpaced law in regard to Fourth Amendment issues. Photo by Martin Divisek/Bloomberg via Getty Images.

With a police helicopter hovering over his Taos County, New Mexico, home, Norman Davis consented in 2006 to allow a platoon of law enforcement officers, armed with A-15 semi-automatic weapons, to search his premises. The choppers had spotted marijuana plants that Davis, then 72, claimed he grew for medicinal purposes.

Based on his consent, the state district court threw out Davis’ request to suppress evidence. But the New Mexico Court of Appeals—the second-highest appellate court—ruled in January 2014 that under the state constitution’s search law, officers should have obtained a warrant for aerial surveillance. The court upheld the suppression motion.

Yet the court added one brief view of the future: “It is likely that ultra-quiet drones will soon be used commercially and, possibly, for domestic surveillance.” At press time, Davis’ case was scheduled for argument before the New Mexico Supreme Court on Jan. 14.

While the federal government uses these unmanned aerial vehicles for military purposes, states are increasingly turning to drones for law enforcement as a means of enhancing surveillance and gathering data. However, many worry that the increased use of drones domestically portends poorly for those who care about privacy and the Fourth Amendment freedom from search and seizure.

“Domestic drones will devastate the Fourth Amendment unless there are some really strict guidelines,” warns John Whitehead, president of the Rutherford Institute, a Charlottesville, Virginia-based nonprofit legal group. “Information collected by a drone should not be used as evidence by a court of law,” adds Whitehead, who wrote about the technology in his 2013 book, A Government of Wolves: The Emerging American Police State.

States are taking notice and considering regulation. According to the National Conference of State Legislators, more than 20 states have passed laws related to drones. Some limit law enforcement’s use of drones or other unmanned aircraft. For example, in Idaho, a law signed in 2013 provides that, except for emergencies “for safety, search-and-rescue or controlled substance investigations,” no person or agency may use a drone to conduct surveillance of private property without a warrant.

Tennessee has a similar law known as the Freedom from Unwarranted Surveillance Act. The law allows aggrieved individuals the right to sue law enforcement agencies in civil court for violations. It also provides that “no data collected on an individual, home or areas other than the target that justified deployment may be used, copied or disclosed for any purpose,” and that such data must be deleted within 24 hours of collection.

“The legislation doesn’t eliminate the use of drones,” says Austin, Texas-based attorney Gerry Morris, co-chair of the National Association of Criminal Defense Attorneys’ Fourth Amendment Committee. They “require some sort of showing of probable cause. This is something that is constantly overlooked. Just because government officials are required to go get a warrant doesn’t mean they won’t be able to use the drones. It just means that they are required to follow the Constitution when they use them.”

However, in California, Gov. Jerry Brown vetoed a measure in September that would have required law enforcement to obtain a warrant for the vast majority of uses of drones. Brown claimed the bill, AB 1327, would put greater standards on law enforcement than those required by the U.S. and state constitutions.

“AB 1327 would have been the first law in California to regulate drones,” says constitutional law expert Erwin Chemerinsky, dean of the University of California at Irvine School of Law. “Drones may be a very valuable tool for investigation in some cases. Under AB 1327, the police still could use drones if they demonstrated to a judge that there was probable cause. I strongly favored AB 1327 and was very disappointed when Gov. Brown vetoed it.”

On the other hand, states have passed laws related to drones that fund the technology or encourage the development of testing sites. For example, the North Dakota legislature passed a law funding a drone test site.

Legal experts believe that at some point courts will need to address the constitutionality of these measures and of law enforcement’s use of the technology. “I do think more legislation is needed,” Morris says. “I don’t think the court opinions at this point have caught up with the technology. Legislators have to address the issue and get out in front of it.”

On the federal level, the 2012 Federal Aviation Administration Modernization and Reform Act governs the rules regulating drones’ domestic use.

“The FAA has the responsibility of drafting a set of rules for integrating unmanned aircraft systems into the airspace,” says Joseph Vacek, a lawyer and aviation professor at the University of North Dakota. “It has taken more time than expected because there has been no industry consensus. I predict that by 2016 we will have the rules in place.”

One question that may arise from drone regulation is the difference between state and federal privacy protection. For example, the New Mexico Court of Appeals interpreted the state constitution as more protective of privacy than the U.S. Constitution.

“It would be better for states to legislate in this area,” says Vacek. “Perhaps we will have a conflict that could eventually wind up before the U.S. Supreme Court. Current Supreme Court law says surveillance from the public airspace is OK. But the court could provide a different answer with respect to drones.”

Adds Chemerinsky: “It is unclear how the Fourth Amendment applies to drones. The technology is too new for the courts to have ruled.”

In Florida v. Riley, the Supreme Court ruled in 1989 that the police may use low-flying aircraft to gather information without a warrant or probable cause. The court said that this was not a search within the meaning of the Fourth Amendment, Chemerinsky says. “If the court follows this with regard to surveillance by drones, there would be no constitutional limit on their use.”

“Technology has outpaced law in this area,” Whitehead says. “Traditional search warrants won’t work with drones. They have the ability to hack into Wi-Fi and use scanning devices from airspace. They represent the essence of a surveillance-police state.”

Experts are still unclear how often drones are now being used. “We haven’t been able to determine the amount of domestic drone use. Much of that information is confidential,” Morris says.

“Many police departments have bought drones and many of them are ramping up for their use in the future,” he says. “I think the trend is going to continue. I don’t know if I have ever seen such a hot-button issue with the public—as far as law enforcement surveillance with drones. People are really concerned about it.”

“Domestic drones are being used,” says Whitehead. “We don’t know how many, but we know that the Department of Homeland Security has used them and some police departments have used them. They will be used far more frequently in the near future.”

Whitehead is dubious about the future. “The Fourth Amendment is on life support,” he asserts.

“The [National Security Agency] is downloading 227 million text messages a day. This violates the Fourth Amendment. We have moved into a new paradigm. Many sci-fi movies are coming true.

“Nearly every technology in the [2002] movie The Minority Report is available today. It’s like those guys are prophets. By 2025 to 2030, we are going to be in a cyborg kind of reality. It sounds preposterous to most people, but it is reality.”

This article originally appeared in the February 2015 issue of the ABA Journal with this headline: “Drones at Home: States eye regulating aerial surveillance.”