How to avoid mucking up the most crucial part of discourse 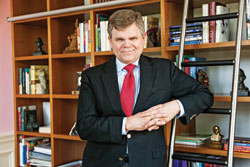 Photo of Bryan A. Garner by Terri Glanger

Each year, the Federal Judicial Center—the splendidly organized education and research agency of the federal courts—holds a series of courses for newly seated federal judges. It’s informally called “Baby Judges’ School.” This year there were some 80 attendees, and I was asked to give a two-hour presentation on writing better judicial opinions. The specific focus was left up to me. I chose openers.

Why? Because most judges’ openers, like those of most advocates, are bad. Yet the opener is the most crucial part of any discourse.

That’s why journalists sweat the “lede” so much. (Yes, they’ve even developed their own special spelling for the starting paragraph.) And they have a formulaic bromide that is familiar to all: who-what-when-where-why?

Although that principle is well-known to lawyers, we seem to consider ourselves somehow exempt from its requirements. That’s too bad, because the whole purpose of the journalists’ approach is to enhance clarity. Hence legal writing suffers, whether in the form of research memos, motions, appellate briefs or judicial opinions.

Lacking a formal text at the Federal Judicial Center presentation, I decided to do something risky. I asked all the federal judges, many of whom had been sitting for a year already, to reconstruct from memory the first two paragraphs of one of their most important opinions in recent months.

The plan was to ask for five volunteers to read their openers. I would critique them (gently), show how I think the best judicial openers are done, and then ask them to rewrite their own openers along the lines I had suggested. The five volunteers would read their first efforts and then read their new versions.

At a reception that evening at the U.S. Supreme Court, Chief Justice John G. Roberts Jr. was incredulous. He told me: “You did what?! These are federal judges. Gutsy move.”

I suppose it was.

The first volunteer to share a judicial opener was a guest of the Federal Judicial Center: Justice R. Ashby Pate of the Supreme Court of Palau. (Palau was a U.S. trust territory until 1994, and Pate participated under the auspices of the 9th U.S. Circuit Court of Appeals’ Pacific Islands judicial program.) Justice Pate’s first version, his actual opener as reconstructed from memory, read this way:

Before the court is the republic’s motion for summary judgment. For the reasons that follow, it is hereby granted.

Article V of Palau’s Constitution grants the president the power to issue pardons, reprieves and commutations, subject to procedures prescribed by law. The legislature prescribes those procedures in the Executive Clemency Act, which, among other things, requires the president to solicit recommendations from various ministers before exercising his pardon power. This case arose when former president Toribiong issued several pardons to the above defendants in the waning days of his presidency and failed to follow the procedures outlined in the Executive Clemency Act—namely, the 60-day waiting period for receiving recommendations from the various ministers. Because the president failed to do so, the republic asks this court to declare the pardons null and void as a matter of law. Defendants make numerous constitutional arguments in response, namely that the republic’s selective prosecution of this case violates their right to equal protection under the Constitution.

After Justice Pate read this passage aloud, I asked some questions: Why was the lead sentence about summary judgment—and nothing more? Why say for the reasons that follow? Why end the explanatory paragraph with equal protection? By that point the readers may not remember the outcome.

Pate was a congenial interlocutor before his fellow judges, and he had us all laughing with his self-deprecating humor.

Four other volunteers read their openers. I posed more questions about their rhetorical choices. (I’m partial to Socratic teaching whenever the audience is astute.)

Then I had the group review the most common types of judicial openers—most of which lack clarity and contain little intellectual sustenance. One commonplace non sequitur accounts for perhaps 20 percent of published opinions: “This is an expedited appeal by the government on the grant of a motion to suppress. We reverse.” Ah. Is that to become a precedential point, that this court reverses on expedited appeals by the government from grants of motions to suppress? In fact, of course, the first sentence has no logical relation to the second at all. That’s why it’s a non sequitur, one known as an anacoluthon.

Then there’s the elongated factual recitation or procedural history that mires you in details wholly unrelated to the substantive issues to be decided. A typical example might begin: “The record in this case reveals that … “—with a series of that-clauses conjoined by semicolons. Often this sort of thing goes on for a full page or two.

And then there’s the completely superficial statement of the legal problem—one that no reader can find clear: “In this appeal from a summary judgment, we are asked to decide whether the trial court was clearly erroneous in finding that there was a delivery of the equipment pursuant to the JSA. Because there is substantial record evidence to support finding No. 5, we hold that the judgment was not clearly erroneous.”

What? Imagine if every article in a newsmagazine were so opaque.

Finally, there’s the type of opener that I like—an opener so clear that anyone could follow what it’s talking about. It’s the deep-issue approach, in which the writer’s major and minor premises are explicit:

“Last May in downtown Los Angeles, the police chased an erratic, reckless driver for about 60 seconds over a nine-block span, but they never exceeded 45 mph. The police were two to three blocks behind the suspect when his car collided with one being driven by Harold King. King brought a Section 1983 claim, and the trial court granted summary judgment for the city. We are asked to decide whether King might recover under Section 1983—which means that he must show that the police conduct ‘shocks the conscience.’ Because we find that a police speed of no more than 45 mph in such circumstances does not shock the conscience, we uphold the summary-judgment ruling.”

There’s actually a formula for this type of opener. It’s based on the elements of a syllogism: “[minor premise] We are asked to decide whether [conclusion]. Because [major premise], we hold that … .” The minor and major premises must be written concretely, without unnecessary abstractness.

After we examined all these different methods of opening, the judges revised their own openers to follow the syllogistic model.

In the waning days of his administration, former president Toribiong pardoned each of the defendants in this case, all of whom had been convicted of serious crimes. Before issuing the pardons, the president failed to solicit recommendations from the attorney general and various other ministers in a timely manner, as required by the Executive Clemency Act. Hence the republic now challenges the validity of these eleventh-hour pardons. Because the procedures specified in the act do not infringe on the president’s constitutional pardon power, and because the republic’s decision to enforce the act does not violate the defendants’ equal-protection rights, the pardons are void.

That revision earned Justice Pate a spontaneous round of applause from the federal judges present. Understandably so. He was one of five volunteers winning similar accolades from colleagues.

I recently asked Pate to reflect on the value of the exercise. Here’s what he said: “The deep-issue exercise was especially helpful because, frankly, it was the largest audience any of our judicial orders have ever had. By reading aloud we were forced to hear how the old, clunky approach actually sounded in the cold light of day, while our highly intelligent colleagues sat with eyes glazed over. The syllogistic deep-issue approach, which demands that you engage the reader immediately—as in the opening lines of a good book—and get to the point quickly—as in a good magazine article—just sounds better in the real world.”

This article originally appeared in the August 2014 issue of the ABA Journal with this headline: “The Clear Opener: How to avoid mucking up the most crucial part of discourse.”