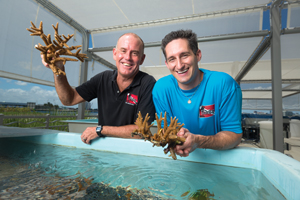 Photo of Robert Kelley and David Black by Tom Salyer

When marine biologists accompanying David Black on a shark-tagging mission told him to kiss the head of a hammerhead they'd tagged before sending it back into the ocean, he blinked in disbelief for a second but went ahead. After all, between his career as a transactional attorney and his passion for diving, he's seen stranger things.

Black was helping University of Miami researchers tag sharks last year as part of a research project through the DiveBar, the country's only "underwater bar association." Its mission is to help promote education and awareness about coral reefs and the marine environment.

"We caught about six or seven sharks that day," says Black, a Fort Lauderdale, Florida, lawyer and past president of the association. "It was really unique. It helps you appreciate how fragile these creatures are and how balanced their environments need to be."

The shark project is only one of the group's philanthropic efforts. It now is helping to restore a coral reef off the coast of Fort Lauderdale. Using coral stems grown in tanks on land and in artificial environments, Black and other DiveBar members set up three dives this year to replant the coral on a formerly desolate stretch of ocean floor dubbed DiveBar Reef. It's already hosting marine life, he says.

Fort Lauderdale attorney Robert Kelley founded the DiveBar in 2011 as a way for scuba-diving enthusiasts to network more naturally. But he also hopes the group's work will preserve the underwater beauty he grew up with as a native of South Florida. DiveBar Reef "was a reef when I was a kid, and I'd love if my grandkids could dive on it and know their grandfather had a hand in bringing it back to life."

Lawyers across the country—from cave divers in Arkansas to scuba divers in Los Angeles—have expressed an interest in starting their own chapters, Kelley says.

The beauty of the DiveBar is that it provides something more substantial than networking. "They're definitely happy we're here," Kelley says. "I think it's good to see lawyers doing things other than trying to make money." 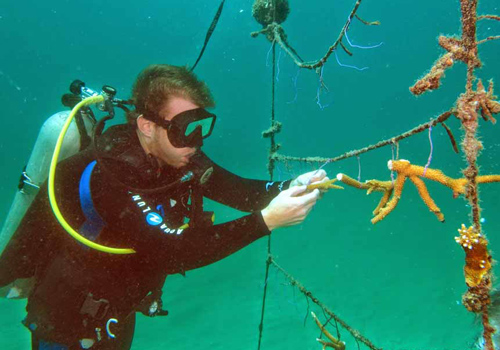 Members of the underwater bar association DiveBar are helping to restore a coral reef off the coast of Fort Lauderdale, Florida. The reef will be known as DiveBar Reef.