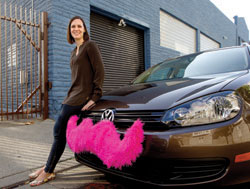 Want to get a car ride just by pressing an app icon? New businesses like Lyft, Uber and Sidecar match drivers and passengers via smartphone technology. They claim they can get vehicles to your door in minutes.

Unlike taxicabs and limousines, the companies don’t see themselves as common carriers, and most do not seek regulatory licensing traditionally required for such services. Payments—that is, if you actually decide to pay—are made through the apps, and the businesses take a varying percentage of fares. For example, Lyft, whose cars are known to carry furry pink mustaches on the front grille, takes “donations.” Sidecar lets passengers pay what they want.

Yet the convenience might come at a price, according to lawyers who’ve been watching the services. The businesses don’t consider the drivers as employees, and when asked about liability in an accident, the companies instead cite insurance policies that drivers carry. Such policies usually cover up to $1 million per accident. But in serious accidents with multiple parties, some say, even $1 million won’t go far.

Drivers with Sidecar and Lyft must pass background checks, the companies’ in-house lawyers say, and they don’t need commercial driver’s licenses. A Lyft driver must be at least 23 years old, have insurance and a smartphone to use the Lyft app, and own a car no older than a 2000 model.

Lyft considers itself an Internet site and claims it is protected from liability in the event of an accident under Section 230 of the Communications Decency Act, says company general counsel Kristin Sverchek, a San Francisco lawyer. The 1996 law holds that no provider or user of an interactive computer service can be treated as the publisher or speaker of information provided by another “information content provider.”

An Uber representative says the company also sees itself as a technology company that connects riders with “high-quality transportation providers.”

Others express doubt about the apps’ claims of statutory protection from liability. “If you are just an app that’s collecting user-generated content on one side, and people are able to pick and choose if they want to hire a service, that to me would have immunity under the Communications Decency Act,” says Timothy Alger, a Perkins Coie litigation partner based in Palo Alto, Calif.

On the other hand, Alger says, “if you’re engaging in branding or giving them the tools of the trade, like GPS devices or equipment to process transactions, you may be moving out of the role of being a pure publisher under Section 230. If a service is setting the price from Midtown to Wall Street at $10, then under the law that might be considered something that is not just a publisher’s role.”

Other attorneys consider the entire idea risky. “There’s an issue of a person driving around in a cab without a license. That’s a public safety risk,” says Los Angeles lawyer Jordanna Thigpen, who previously served as the San Francisco Taxi Commission’s executive director. “Would you like to have an unlicensed pharmacist or doctor? It’s along the same lines.”

Government approval for the rideshare businesses varies. The Philadelphia Parking Authority organized a sting operation targeting Sidecar drivers. Three were cited as “unauthorized service providers” in February, and the vehicles were impounded. According to San Francisco attorney Beth Stevens, Sidecar’s assistant general counsel, the company is not currently operating in Philadelphia.

But other municipalities are carefully backing the idea. Last September the California Public Utilities Commission created a “transportation network company” category to regulate ride apps. For example, transportation network companies would need a license from the commission and be required to do criminal background checks on all drivers. They also must have a driver training program, a zero-tolerance policy regarding drug and alcohol use, and an insurance policy with a minimum of $1 million coverage per incident.

The Federal Trade Commission also showed support for the new industry, criticizing recent D.C. Taxicab Commission rules as being too restrictive for businesses like Lyft and Uber. The rules included a specific size for town cars, a base fare and an order that all cars must be equipped with credit card readers.

District lawmakers also found the rules too strict, and they introduced a motion to amend the regulations shortly after they were released. The amendment, signed by D.C. Mayor Vincent Gray in September, eases the rules regarding ride-sharing apps.

Investors have also shown support. Uber reportedly raised $258 million during the past year, with Google Ventures as a major financier. Google Ventures was also a contributor in a $10 million Sidecar investment, according to Forbes. Lyft has raised $82 million, according to the news site TechCrunch.

Meanwhile, Uber’s liability in an accident is being tested in San Francisco Superior Court, where a personal injury suit names the business as a defendant. Also named as a defendant is driver Djamol Gafurov, whose insurance policy had a limit of $750,000 per incident.

According to the complaint, Gafurov’s car hit a Dodge Charger driven by Ziad Sleiman, also a defendant. The Charger ran off the road and struck a fire hydrant that then flew into the air, striking pedestrian Claire Fahrbach, says her lawyer, Doug Atkinson. Fahrbach suffered lacerations, a fractured leg and multiple herniated discs, Atkinson says.

He notes that the $750,000 insurance policy is the minimum mandated by California law. Sleiman, who broke his hand in the accident, is also suing Gafurov. According to Atkinson, there was significant property damage at the accident scene.

“Uber was presented as ‘We’re revolutionizing taxi service. … We inspect better, we insure better.’ But really it turns out that was just a false promise,” Atkinson says. “Because if $750,000 is their insurance requirement, they’re just going to go with the lowest requirement for the highest profit.”

An Uber in-house lawyer asked Atkinson to let the business out of the action, he says, and compared the business to Facebook. If you arranged a ride with a Facebook friend and got in an accident, Atkinson says the Uber lawyer told him, the social media site would not be liable.

When asked about Fahrbach’s lawsuit, Uber sent the following statement: “In this case, the driver had all of the required commercial licensing and insurance with the requisite California (transportation charter party) license. For these reasons, we believe that Uber acted appropriately in activating the driver and his business on the Uber technology platform.”

Uber is also being sued in Massachusetts. One case, filed by two cab companies, alleges that Uber violates trademark and racketeering laws by using the Internet to transmit “fraudulent misrepresentations” to Boston consumers. The other filing, brought by cab drivers, states that Uber runs afoul of Massachusetts law by taking up to half of the 20 percent tip from passengers.

A lawsuit was also brought against the company by Uber drivers in San Francisco on the grounds that the company takes too much of their tips.

“The allegations made against our company are entirely without merit and we will defend ourselves vigorously,” says Uber spokesman Andrew Noyes.

Currently, there are no court opinions that relate directly to ride-sharing apps, says Lyft counsel Sverchek. For guidance, she’s looked to case law related to matching sites, such as eBay and Match.com.

“What we’re really doing is acting as an intermediary, allowing two individuals to connect,” Sverchek says about her company.

“Our goal is not to compete with taxicabs,” she says. “We want to be a complement to other forms of transportation, so people feel empowered to live car-free.”

Sverchek notes that when PayPal started in 1998, it was controversial because money transfer laws were strict, and it varied by state.

“If their lawyer had said, ‘No, you can’t do this,’ ” she says, “it would have been pretty detrimental for their business.”

This article originally appeared in the January 2014 issue of the ABA Journal with this headline: “‘App’ Me a Ride: Internet car companies offer convenience, but lawyers see caution signs.”