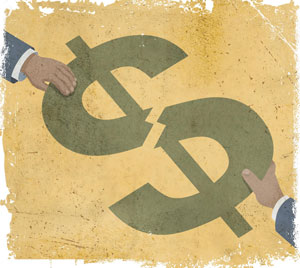 The timing seemed prescient. One day after the ABA adopted a hotly contested resolution to guide states in their regulation of nontraditional legal service providers, Avvo rolled out Avvo Legal Services, offering fixed-fee, limited-scope legal services through a network of attorneys in 18 of the nation's most populous states.

Launched Feb. 9, Avvo Legal Services builds on the 2014 introduction of fixed-fee legal advice by phone. The new service offers consumers direct access to attorneys who provide limited-scope legal services at a fixed fee, including review of legal documents such as business contracts and nondisclosure agreements, as well as more involved matters such as uncontested divorces and citizenship applications.

“With this service, we could be the Match.com of legal,” says Avvo CEO Mark Britton. “We put the needy consumer together with the needy lawyer.”

Gregory W. Coleman, who as 2014-15 president of the Florida Bar closely studied alternative legal providers, agrees that the program fills a consumer need.

“They are reaching a market that we as a profession have been unable to serve, which is not just the indigent but the working middle class,” says Coleman, a partner in the West Palm Beach firm of Critton, Luttier & Coleman. “They can’t afford a $250-an-hour lawyer, but they can afford a flat fee for a task they need accomplished.”

But he and other lawyers are concerned that the program’s fee structure could violate ethical prohibitions against fee sharing and put lawyers who participate in the program at risk.

Avvo sets the menu of services and fees. Clients choose a service and an attorney and make full payment up front through Avvo’s website. Avvo notifies the attorney, who then contacts the client directly and completes the service.

Once a month, Avvo deposits earned fees into the attorney’s operating account. As a separate transaction, it withdraws from the account a per-service marketing fee. The fee varies in amount according to the service provided.

Coleman believes that because the marketing fee is tied to the amount of the legal fee, it violates Florida’s prohibition against fee sharing. For it to be acceptable, it would have to be a flat fee across all matters, he says.

“Most of the ethics opinions I’m aware of say that, if the lawyer is paying a fee to be included in a directory service, that fee should not be tied to the number of clients obtained or the amount of the legal fee earned,” Hyland says. “Here, Avvo’s ‘marketing fee’ appears to be tied to both.”

But that does not mean that the service is inherently unethical or harmful to clients, she adds. “This is an area where I would like to see reform in the ethics rules—to give lawyers more options for marketing their services and finding new clients.”

Northford, Connecticut, lawyer Susan Cartier Liebel, founder and CEO of Solo Practice University, raises a different concern. The unearned fees held by Avvo each month should instead be held in the attorneys’ IOLTA accounts, she believes. By retaining this money in its own accounts, Avvo is diverting interest that would otherwise go to fund legal aid.

Avvo chief legal officer Josh King defends the fee arrangement as consistent with ethics rules. The critical question, he says, is whether the arrangement harms the client. “You can’t apply the ethics rules unless there’s consumer harm,” he says. “We’ve been careful to make this product good for compliance-minded lawyers and especially good for consumers and clients.”

Avvo CEO Britton sees this service as benefiting both clients and lawyers. For lawyers, it will help them build their practices and recapture a part of the market that is being lost to do-it-yourself legal sites. For clients, it enables them to access services at an affordable, fixed price and to understand exactly what they are purchasing.

“From our beginning, Avvo has created these dynamics where we’re helping lawyers start the conversation with the needy consumer,” Britton says. “Fixed-price, fixed-scope legal services are just a continuation of that.”

For lawyers, the service solves three of their biggest pain points, he says: getting clients, billing and getting paid. “The beauty here is we get them the customer, we get the cash up front, and they don’t have to worry about billing or tracking time,” he says.

But Coleman is concerned for younger lawyers who sign on to this program as a way to build their practices. “Hypothetically, what happens if the Florida Bar looks at it and says it violates our fee-sharing rule? What happens then to these lawyers?”

This article originally appeared in the May 2016 issue of the ABA Journal with this headline: “Fee Fight: Is a fixed-cost service a fee-sharing violation?”