Is Sherlock 'complete'? 7th Circuit will consider when literary characters are free from copyright 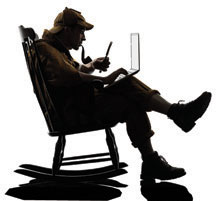 Perhaps we could call it “The Adventure of the Fan Fiction Friction.” Or “A Study in Copyrights.” But the fate of the newest iteration of Sherlock Holmes mysteries may well be up to the U.S. District Court for the Northern District of Illinois.

That’s where Holmes scholar Leslie Klinger won a declaratory judgment against the ruling that most of the Holmes stories are free of copyright. Klinger and novelist Laurie R. King are co-editors of In the Company of Sherlock Holmes, a forthcoming collection of Holmes-inspired short stories by prominent authors such as Larry Niven and Harlan Ellison. Publication of the book was stymied when the Conan Doyle Estate Ltd. requested a license for the use of main characters Holmes and Dr. John Watson and threatened to block sales of any unlicensed book.

Klinger, a Los Angeles tax lawyer by day, disputes that there’s anything to license. Both sides agree that the characters of Holmes and Watson are complex enough to be copyrighted. Courts have established that fictional characters are copyrighted on the publication date of the stories in which they are first “sufficiently delineated” to merit protection. The dispute was over when the characters acquired copyrights.

Klinger, who had previously edited a collection of the entire Holmes canon, says he was “well aware” that only 10 of the 60 short stories and novels were still under copyright. He believes that means his authors were free to use characters and story elements from the bulk of Arthur Conan Doyle’s work, and license only those from the last 10 stories.

But the estate wanted a license for use of any Doyle characters and story elements. And the publisher of Klinger’s book couldn’t afford the licensing fee and wouldn’t publish until the situation was settled. So he sued.

At first, there was no answer to Klinger’s complaint.

“No disrespect to Mr. Klinger, but we didn’t feel that his book was worth a federal case,” says Ben Allison, a Santa Fe, N.M., lawyer who represents the estate. “We were willing to give him a default judgment so he could do his book and it wouldn’t apply elsewhere.”

But Klinger wanted a ruling for the whole world of Holmes fans, a passionate multinational group that predates Trekkies and Twihards by decades. He says the estate has gotten unnecessary licensing fees out of self-published fans as well as major movie studios.

“We knew going in that it would have been far cheaper to pay the $5,000 they wanted,” says Klinger. “But we were angry … that they could use their economic position to bully people into paying license fees, even though they had a very weak case.”

So he moved for summary judgment. That got the estate’s attention.

A court has ruled on this issue before. In 1989’s Silverman v. CBS, the 2nd U.S. Circuit Court of Appeals at New York City said characters are complete on their first appearance—which would support Klinger’s position. But the estate made the novel argument that this should apply only to “flat” entertainment characters, not “round” literary characters like Holmes and Watson. And if people are permitted to use only elements from the earlier, public-domain stories, the estate argued, this would effectively create many different versions of the characters, undermining the idea of a character as a single work of authorship.

The district court ultimately found that the estate’s argument ran against case law and ruled for Klinger. It declined to rule on the copyrights for the characters themselves.

The estate’s appeal is now pending with the 7th Circuit at Chicago, and a lot could be at stake. Allison notes that courts have never before considered whether there’s a distinction between copyrights for round literary characters and flat ones. If the court finds one, its ruling would make new law for long-standing literary characters that are partially in the public domain.

But few of those characters have the enduring appeal of Sherlock Holmes, Klinger says.

“There are not a lot of Tarzan books being published,” he notes.

This article originally appeared in the June 2014 issue of the ABA Journal with this headline: “Free Sherlock! The 7th Circuit will consider when literary characters are ‘complete’.”