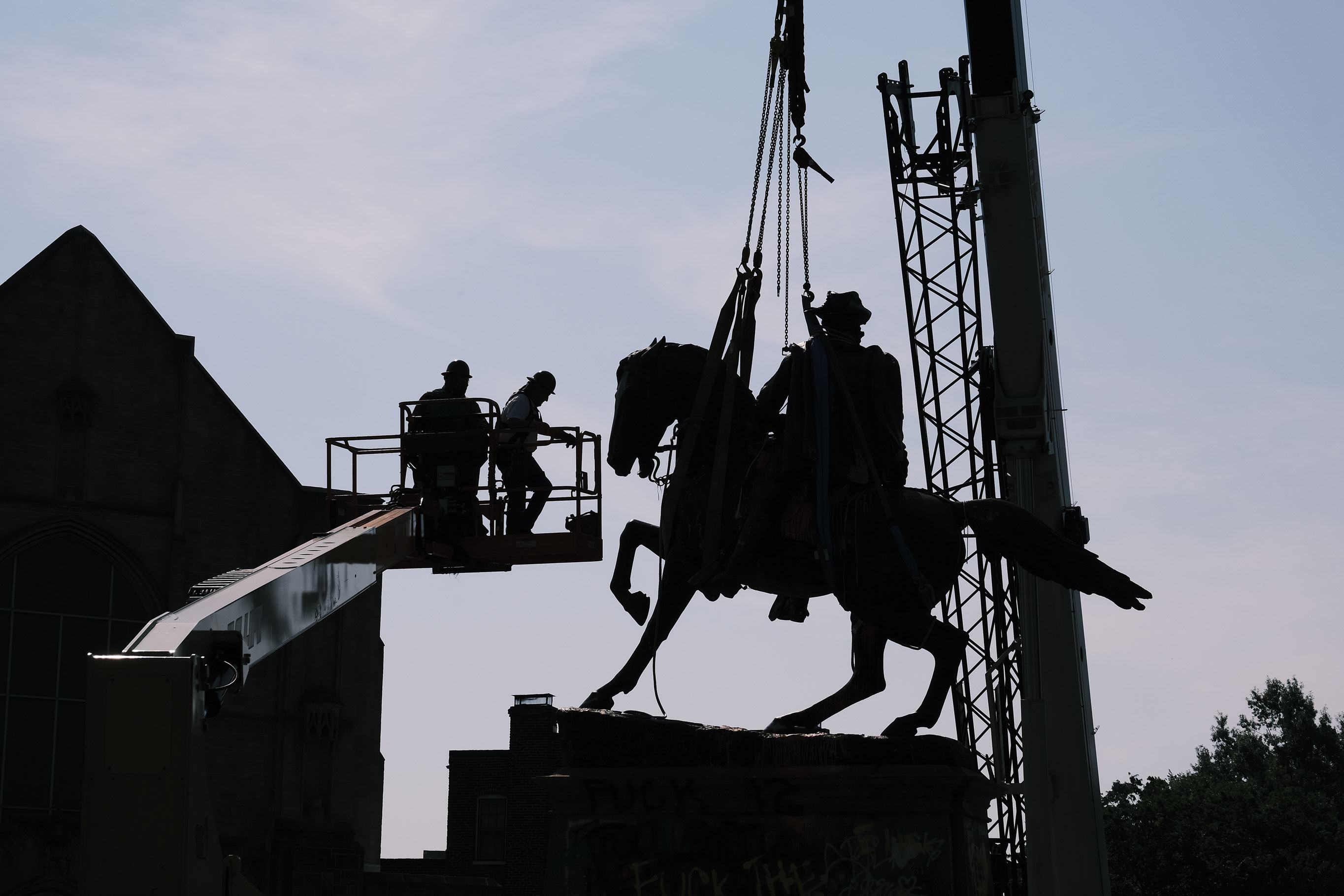 A Richmond, Virginia, statue of Confederate Gen. J.E.B. Stuart is prepared for removal in July 2020. Photo by Eze Amos/Getty Images

In August 2015, while serving as a circuit court judge in Patrick County, Virginia, Martin Clark removed a portrait of Confederate Gen. J.E.B. Stuart looming over a defense table in his courtroom.

“I took it down and put it in storage in a room in the back. I hoped to do it quietly and without a lot of commotion and attention and focus,” says Clark, now retired and a bestselling novelist.

His resolve to remove the portrait was soon tested when people noticed the picture was missing. The town of Stuart, Virginia, was named after the Confederate general Clark consigned to storage. Some residents who viewed Stuart as a hero protested outside the courthouse and registered their disdain for the judge on social media. Also riled, the Patrick County Board of Supervisors demanded an explanation. In September 2015, the judge responded in a written order.

“It is my goal—and my duty as a judge—to provide a trial setting that is perceived by all participants as fair, neutral and without so much as a hint of prejudice,” Clark wrote. “Confederate symbols are, simply put, offensive to African Americans.”

Several other judges, concerned about the appearance of bias, also have taken down artwork. The rulings have ignited a debate about whether portraits, monuments and other symbols in and/or around courthouse buildings stack the odds against people of color by denying them the right to a fair trial.

In September, a Virginia judge removed a life-size portrait of Gen. Robert E. Lee from the Louisa Circuit Court, where it had hung for more than 100 years. And in December, the North Carolina Supreme Court took down a portrait of slave owner and former Chief Justice Thomas Ruffin, who also wrote pro-slavery decisions.

Also in December, amid calls for racial justice after the killings of George Floyd, Breonna Taylor and other African Americans, David Bernhard, a judge in the Fairfax Circuit Court in northern Virginia, turned his gaze on the line of white judges festooning the walls of his courthouse. Portraits of white judges outnumbered portraits of judges of color by 45 to 2.

“At issue is not the narrow inquiry whether the portraits depict judges who have exhibited overt personal racial animus towards African Americans,” Bernhard wrote in his Dec. 20 opinion ordering the portraits’ removal from the courtroom. “Rather, the broader concern is whether in a justice system where criminal defendants are disproportionately of color and judges disproportionately white, it is appropriate for the symbols that ornament the hallowed courtrooms of justice to favor a particular race or color.”

For some, portraits of white judges may call into question the impartiality of the courtroom. But for others, including former Federalist Society member and attorney Hans Bader, removing pictures of white judges without considering their judicial records smacks of pandering to progressives.

Bader wrote a Liberty Unyielding blog post titled “You Can’t Make This Stuff Up: Fairfax Courts Edition” criticizing Bernhard’s ruling. He says it is “entirely appropriate” for Maryland officials to remove the statue of former U.S. Chief Justice Roger Taney, who wrote the opinion in Dred Scott v. Sandford. But there is no evidence that portraits of white judges affect the outcome of a trial, he says. 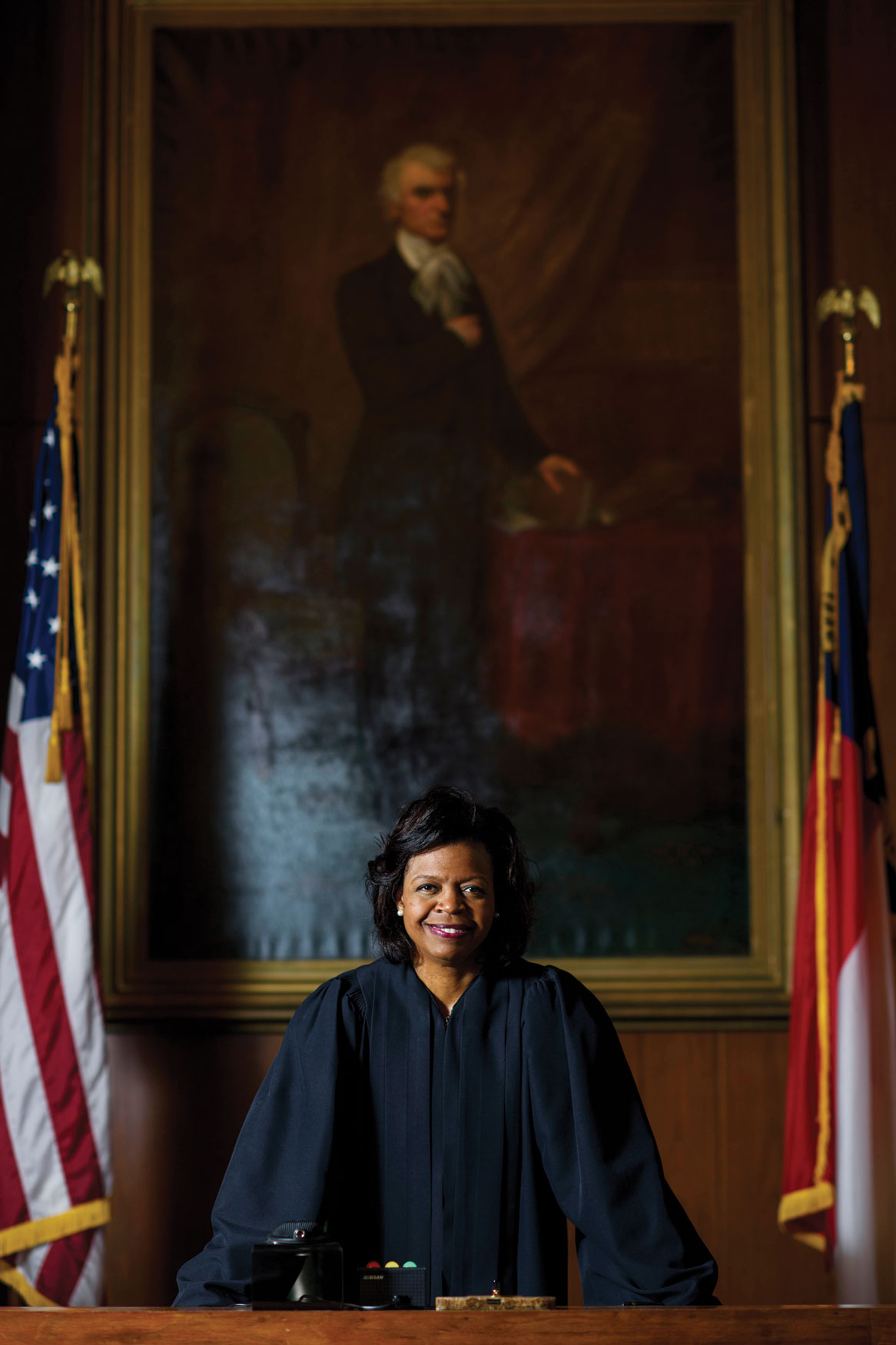 “The assumption is that people of one race cannot give people of another race a fair trial,” Bader says. “The rulings seem to reflect unstated assumptions that are contrary to reality.”

Retired Judge John G. Browning’s portrait hangs in the gallery of the second floor of the George L. Allen Sr. Courts Building in Dallas. He supports removing judicial portraits, including his own.

“There are specific examples where there’s a troubling legacy unique to a particular judge or justice,” Browning says. “Then there’s the simple effect of putting yourself in the shoes of an African American defendant or litigant in an environment where there are reminders of a white-dominated legal system.”

Bernhard first ordered portraits removed from his own courtroom in 2017. But as an increasing number of Americans have demanded courts address bias in the justice system, more monuments and portraits have continued to come down.

The movement has a fulcrum in Virginia. In summer 2020, officials removed statues of Stonewall Jackson, naval officer Matthew Fontaine Maury and Stuart in Richmond. In September, engineers in Charlottesville, where a white supremacist murdered Heather Heyer during the Unite the Right rally in 2017, removed a 900-pound bronze Confederate soldier that had stood outside the Albemarle County Courthouse for more than a century.

Judge Bernhard invited attorneys to file motions on the broader question of removing portraits of white judges after moving from his own courtroom to a larger one during the pandemic.

Bryan Kennedy, a senior assistant public defender in Fairfax County, responded in a motion on behalf of Terrance Shipp Jr., a Black man. Kennedy wrote in his motion that the portraits link “whiteness with authority and the law.”

Shipp stood trial in Bernhard’s courtroom in January on charges of possessing a firearm and ammunition as a convicted felon. He was acquitted.

The attorney plans to file similar motions in other cases. Kennedy says Confederate monuments and paintings are “low-hanging fruit,” and the movement to take down judicial portraits is about giving more thought to the spaces where justice is served.

“It’s important to think about what we’re projecting to jurors and to people appearing in the court, either as witnesses or as people accused of crimes,” Kennedy says.

Josh Blackman, a constitutional law professor at the South Texas College of Law Houston, questions whether Bernhard’s decision could allow defendants to contest their convictions by arguing they were denied their right to a fair trial because of the portraits.

“If a court wants to reassess if a particular judge no longer deserves to be honored, I don’t have any objection,” Blackman says. “But Chief Justice John Marshall, regarded as the greatest judge in American history, was a massive slaveholder in Virginia. If that’s the standard, then [his statue at the Supreme Court] has got to come down. Then the question is, if we are removing their portraits, what do we do with their judicial decisions? Do we just not cite them?”

In September 2015, after Clark removed Stuart’s portrait, County Supervisor Roger Hayden said at a public meeting that although he was friends with Judge Clark, “we respectfully disagree on this issue,” noting the portrait of Stuart had hung at the courthouse for 150 years.

The backlash against Clark was not limited to the board of supervisors. A Confederate heritage group called the Virginia Flaggers rallied at the Patrick County Courthouse with battle flags. Clark said his wife, Deana, also saw death threats on Facebook.

“I’ve always told her that if we ever get shot, it will not be from the noisy person on Facebook,” Clark says. “It will be the quiet guy … who is pro se in his child custody case. You take visitation away from him. He smiles at you as you leave the courtroom … and shoots you in the back of the head when you’re mowing your yard.”

Clark says more people of color should be appointed to the bench so their paintings can hang alongside their white counterparts.

Kennedy agrees the debate over portraits only scratches the surface. “We need to use this as a conversation starter, not a conversation ender,” he says.

Some argue Confederate symbols of Southern heritage should be preserved.

But Shreveport, Louisiana-based Donna Y. Frazier, the Caddo Parish attorney, who is a council member of the ABA’s Government and Public Sector Lawyers Division, says the best place for Confederate monuments and symbols is in museums. She handled a case to remove a 30-foot Confederate monument that had sat outside the Parish County Courthouse.

“Here you had a treasonous government that was overthrown. Why would we have monuments to it?” Frazier asks.

Ultimately, Clark says, he failed to keep the portrait of Stuart out of the public eye. The board of supervisors had the portrait restored and hung up in the county administration building.

This story was originally published in the August/September 2021 issue of the ABA Journal under the headline: “Reframing History: Judicial portraits and Confederate monuments stir debate on bias in the justice system.”

Print and initial web versions of "Reframing History," August-September, incorrectly stated that Hans Bader is currently a member of the Federalist Society. He is a former member.