After nearly 30 years on the court, Justice Thomas’ supporters and detractors are still debating who he really is 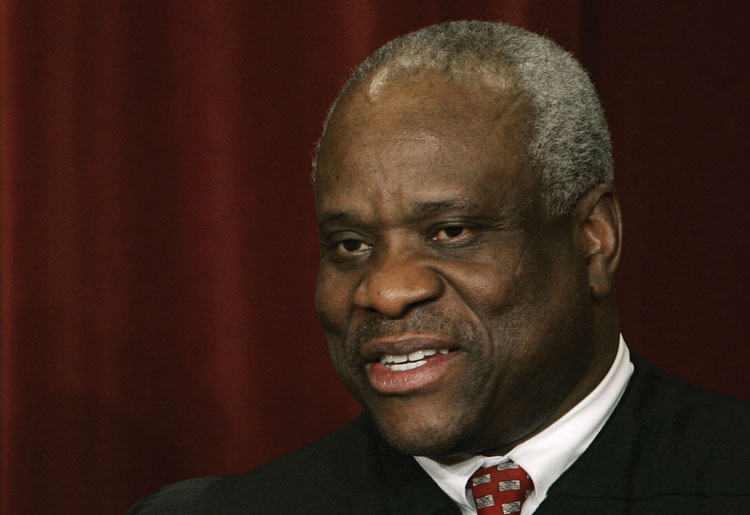 Justice Clarence Thomas is known for rarely speaking during oral arguments at the U.S. Supreme Court. But it was a chatty and jovial Thomas who appeared in the courtroom last month—several hours after the day’s court session had adjourned—for a conversation with an interviewer before members of the Supreme Court Historical Society.

“I really don’t have a lot of stress. I cause stress,” Thomas said with a laugh to financier and philanthropist David Rubenstein on June 3.

Thomas has reason to smile. With Justice Anthony M. Kennedy’s retirement last year and the confirmation of Brett M. Kavanaugh to fill his seat, the court is widely perceived as having moved to the right, where Thomas has been all along. And Thomas is now the longest-serving member of the court and the senior associate justice. (Chief Justice John G. Roberts Jr. is considered most senior because of his position, and he assigns opinions when he is in the majority.)

President Donald J. Trump has nominated many of Thomas’ former law clerks to federal judgeships or important positions in the executive branch, including eight to the federal courts of appeals.

And this past term, Thomas has continued to let his judicial pen do most of the talking as he wrote provocative solo opinions in areas such as abortion, freedom of the press and the right of criminal defendants to be represented by a lawyer.

“I would say he’s hitting his stride,” says Carrie Severino, a former law clerk to Thomas who is the chief counsel and policy director of the Judicial Crisis Network, a conservative group focused on court nominations. “It’s great to have someone of his stature and his ability on the court, and a real leader of the originalist wing of the court.”

With all this going for him, could Thomas possibly be considering retiring after nearly 28 years on the court? That’s a theory that emerged this spring based on the idea that stepping down now would give Trump the opportunity to keep his seat occupied by a solid conservative for another quarter-century or more.

Thomas, who turned 71 last month, emphatically told a crowd at a Pepperdine University School of Law event in Beverly Hills, California, in late March that he was not retiring, not even in 20 years or 30 years.

At the Supreme Court Historical Society event, Thomas said his wife, Virginia Thomas, informed him of a news alert she had received that suggested he was retiring. “Wow. Glad to know that,” was Thomas’ response, he told Rubenstein. “I have no idea where this stuff comes from.”

Unless Thomas pulled off a major head fake and announced retirement plans at the end of the term (after this column went to press), he is poised to help shepherd the newly more conservative court in a rightward direction.

Thomas was active this term in filing separate opinions—often solo concurrences or dissents, but sometimes joined by new conservative colleagues such as Kavanaugh or Justice Neil M. Gorsuch, who joined the court in 2017.

In February, Thomas concurred in the court’s denial of review of a defamation case brought against Bill Cosby, the comedian and convicted sex offender. In that case, a woman who alleged she was a victim of Cosby’s was found to be a limited-purpose public figure under libel law by the district court, and the Boston-based 1st Circuit upheld. Thomas said in McKee v. Cosby that he agreed the high court should not take up that “factbound question” of whether she was a public figure.

But he went on to write 14 pages questioning a landmark Supreme Court free press decision, New York Times Co. v. Sullivan, which set a standard limiting public figures from winning libel suits unless the statements in question were made with “actual malice,” meaning with the knowledge they were false or made with reckless disregard for the truth.

“There are sound reasons to question whether either the First or Fourteenth Amendment, as originally understood, encompasses an actual-malice standard for public figures or otherwise displaces vast swaths of state defamation law,” Thomas wrote.

“I write to explain why, in an appropriate case, we should reconsider the precedents that require courts to ask” whether libel plaintiffs should be classified as public figures, he wrote. The phrase “in an appropriate case” is one Thomas uses often to invite litigants to follow up on his theories.

And as the issue of abortion presented itself to the court in various cases, Thomas used separate opinions to lend support to the momentum of anti-abortion forces.

The justice used his opinion concurring in the judgment in Timbs v. Indiana, a case about excessive fines and whether the Eighth Amendment was incorporated against the states, to (again) question substantive due process, a basis for the privacy right central to the abortion rights recognized in Roe v. Wade in 1973.

“Because the court’s substantive due process precedents allow the court to fashion fundamental rights without any textual constraints, it is equally unsurprising that among these precedents are some of the court’s most notoriously incorrect decisions,” Thomas wrote, citing Roe and Dred Scott v. Sandford, the notorious 1857 decision that held black slaves were not U.S. citizens.

And in May, Thomas wrote a concurrence to the court’s unsigned opinion in Box v. Planned Parenthood of Indiana and Kentucky Inc., which upheld a provision of Indiana law that dealt with the disposition of fetal remains but declined to review a lower court’s ruling invalidating a law barring abortion providers from carrying out the procedure for reasons of race, sex or disability.

Thomas’ 20-page concurrence compares such trait-selective abortions to the eugenics movement of the early 20th century. The opinion drew criticism from some in the legal academy.

Thomas “is welcomed to deliver sermons against eugenics but should have the decency to acknowledge that the sermon is one of constitutional morality and not of constitutional history or constitutional law,” wrote Mark Graber, a professor at the University of Maryland Francis King Carey School of Law in Baltimore, at the Balkinization blog.

Thomas will be the subject of a new book this fall and a documentary film next year. The book comes from a Thomas critic, while the film is expected to be more complimentary.

Corey Robin, who teaches political science at Brooklyn College and the City University of New York Graduate Center in New York City, has written The Enigma of Clarence Thomas, to be published in September by Metropolitan Books. It will argue that while Thomas has made a broad and deep imprint on the law, he has remained something of a mystery to most Americans.

“He’s kind of like Ralph Ellison’s Invisible Man on the Supreme Court,” Robin says. “Everyone seems to know about him, but they know very little about him, and what they do know is kind of wrong.”

The book will argue that “the mainspring of Justice Thomas’ jurisprudence is black nationalist conservatism,” as Robin characterizes it. The justice’s race-conscious conservatism is not just a theory, but a set of values and beliefs—as well as policies and prescriptions—that Thomas has sought to cultivate in the black community, Robin says.

The author, a progressive, uses terms such as “extreme” and “bitter” to describe Thomas, who succeeded Justice Thurgood Marshall in 1991 after his heated confirmation battle.

But Robin agrees that the justice is having a moment in which many of his long-held solo views are starting to gain traction. “For many years, he has written these solo dissents that were hardly read by anyone,” he says. “It’s like he is writing messages in a bottle. Someday, someone will find them.”

A more glowing look at Thomas is expected from a documentary in the works from Manifold Productions, which has produced several films with a conservative bent. The justice is said to be cooperating with the production of Created Equal, which Manifold says on its website “will tell the Clarence Thomas story truly and fully, without cover-ups or distortions.”

After Thomas’ nearly 30 years on the court, his critics and supporters are still debating who Thomas is. But the June 3 conversation in the courtroom before the historical society, Thomas mostly seemed at peace with himself and his role on the court.

“I think I am so blessed to be here, to have the opportunity to live up to my oath, to be a part of this country and … the constitutional system in this country,” he said. “So, this is fine. My wife and I are doing fine.”

This article was published in the July-August 2019 ABA Journal magazine with the title "Hitting His Stride."