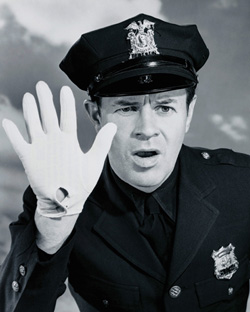 When New York Gov. Andrew Cuomo announced this summer that he planned to ask legislators to decriminalize possession of small amounts of marijuana, he was—intentionally or not—wading into one of the biggest issues facing the New York City Police Department: its stop-and-frisk policy. According to statistics from the NYPD, every year since 2002 more than 80 percent of New York City residents stopped and frisked by the police were innocent, and more than 85 percent of those stopped were either black or Latino.

The New York Civil Liberties Union has used those stats in its campaign against what it dubs “unconstitutional street stops” over the last decade. They are now also part of the motivation for Stop and Frisk Watch, a new app that can surreptitiously record street encounters with the police and send them directly to the NYCLU.

“We wanted people to have a tool to shine a spotlight on what stop-and-frisk policing looks like,” says Jennifer Carnig, NYCLU director of communications.

The app, which can be triggered by the standard cellphone buttons, starts recording and puts the phone in lock mode so no one can see that it’s recording—or stop it. Shaking the phone sends the video directly to the NYCLU, Carnig says. Intended for use by observers of police activity—not those subject to it—the app also has a “listen” function for advocates and others who want to monitor where police activity is happening, providing a location for where videos are being recorded.

The New York Civil Liberties Union plans to use the resulting videos for public education, lobbying, press work—and potentially litigation. “We’ve gotten inundated with videos,” Carnig says. “Lots of them are videos of people saying, ‘Then I’ll be [recording] the cops.’ ”