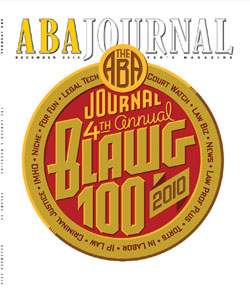 “Navigating the Law,” December, highlights a positive step in the right direction—the Youth Justice Board in New York City and its instructional comic book for teens, I Got Arrested! Now What?

While I have not seen the actual contents, I can tell you from years of firsthand experience that far too often, young people in the system have little to no understanding of their legal rights—and, as a result, those rights are frequently violated.

Public defenders are not always able to adequately address these needs, so anything that helps raise a general level of awareness in an accurate and understandable manner would seem to be a good thing.

ON THE PROSECUTOR’S ROLE

Lurking between the lines of “CSI Breakdown,” November, is a fundamental question about the role of the prosecutor in our system of justice. As a former prosecutor myself, and as past chair of the Innocence Project of Minnesota, I have always viewed the role of the prosecutor as something more than merely an advocate for the state in criminal cases. I believe that the job of prosecutor is not merely to obtain convictions but to do justice. That is, after all, why prosecutors are invested with such broad discretion to decline criminal charges in the interest of justice.

This viewpoint is not necessarily shared by all prosecutors. Many whom I know—fine people and excellent lawyers all—view the position more narrowly, as one where the job is to get a guilty verdict. This viewpoint is captured in the ironic adage of veteran prosecutors that “anyone can convict the guilty; convicting the innocent takes real skill.”

In my opinion, those prosecutors who resent the involvement of forensic scientists on behalf of defendants in criminal cases have forgotten that their job is not about getting convictions but about achieving justice. When a prosecutor goes beyond vigorous cross-examination of forensic scientists and begins to attack them personally or threaten their livelihood, they have not only abused their discretion but shown themselves to be unworthy of the trust the public has placed in them. The prosecutor who is confident in his or her case should not feel threatened or become vindictive when a forensic scientist/medical examiner testifies for the defense. Indeed, those medical examiners who are willing to testify for the defense in a criminal case have demonstrated their ability to be objective. I applaud both Lindsey Thomas and Susan Roe and the ethical compass that leads them to testify on behalf of what they understand to be scientific truth, regardless of which counsel table it sits at.

IN DEFENSE OF MOTHERING

As a partner at a large law firm who is also the mother of two young children, I am absolutely appalled by some of the statements and suggestions contained in “Smothering Mothering,” November, page 18.

The article asserts that, among other things, “helicopter” or smothering parents are those who show up at all of their child’s baseball games and cheer their child on. Further, helicopter parents are described by law professors Gaia Bernstein and Zvi Triger as those who “rely on a multitude of monitoring devices such as ‘nanny cams,’ and safety devices such as helmets and knee pads.” They are also described as those who “must know the names of teachers and friends. They must be actively involved in their children’s activities—maybe coach Little League or volunteer at school and church.”

I agree that there are extremes to which some parents go that inhibit the development of independence and self-sufficiency in their children. But to suggest that such extremes equate to actions such as insisting that your child wear a helmet or knee pads while riding a bicycle is beyond absurd. Is the author aware that countless children suffer brain injuries or die because they were not wearing a helmet and crashed?

Free speech and desiring to publish a variety of opinions aside, do you really think it wise to encourage parents as a whole to be even less involved than they already are? Or to make those who try to be a part of their children’s lives feel guilty for doing so? I absolutely acknowledge that there are parents who go to extremes and do more harm than good to their children. I feel certain, however, that is the exception, not the rule. Unfortunately, the reality in our world is that far too few parents care enough about their children to be the slightest bit involved in their lives. In my opinion, this article exalts absentee and negligent parenting. It applauds treating even young children as if they are adults.

When I became a mother after practicing law for several years, I knew that it would be a challenge to do both successfully. Successful parenting, at least for me, includes looking out for the safety and well-being of my children and making sure they know they are loved. Being a good mother, in my opinion, includes making sure my little girl wears her helmet (and knee pads) while on her bicycle. It includes being at my little girl’s soccer games and cheering her on for trying hard and playing as a member of a team. Moreover, I firmly believe not only that knowing her teacher’s name is a good thing but that actually attending the parent/teacher conference each reporting period is key to learning how my child is progressing in school. Being a good parent, in my opinion, also includes knowing who her friends are, since friends oftentimes have more influence over a child’s behavior than a parent. I am quite positive that I will do these same things for my son as he grows up.

I strive so hard to be involved with my children’s lives while still having a successful career in the very demanding, time-consuming field of law. I make choices such as doing some of my work late at night after my children go to sleep so I can be a part of their lives during the day. At least once a month I actually take lunch at 10:30 in the morning (as opposed to eating at my desk as I do on most days) to go have lunch with my daughter at school. I volunteer to help with some of the kindergarten class parties and school fundraisers. I try to pick my children up from day care and after-school care early enough to spend more than 30 minutes with them before they go to bed. Am I a helicopter parent? Not even close. That the author of the “Smothering Mothering” article would seem to suggest such is both offensive and ridiculous.