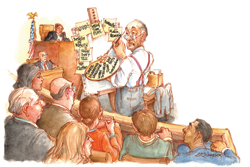 A group of us took off last Wednesday afternoon to hear Judge Bramble give his first opening statement. At age 62, Miles Wellborne Bramble—the scourge of the court of common pleas—left the bench to start his own “litigation boutique” law firm, and he was trying his first case as a lawyer in 30 years.

“Brilliant,” said Cartwright Buchanan when we were walking to the Brief Bag. “His language and diction were impeccable. His logic and organization were exemplary. He laid out every fact he needed to prove his case. I say, ‘Bravo!’ ”

“I understood every word,” said Pirelli. “And the only impression I had after 52 minutes was that this is someone who likes to hear himself talk—the sort of person who would impress Cartwright Buchanan.”

“I’m afraid I agree with Mike,” said Beth Golden. “For all his swagger, I don’t think the emperor was very well-dressed. What do you say, Angus?”

Angus smiled. “Bramble had some things to say,” he said. “But his job was not just to say things. It was also to create memories about his case in the minds of the judge and jury, and I’m afraid he didn’t do that. The only memory he made was about himself.

The pad I had taken to Bramble’s trial didn’t have anything on it, so I used it to take notes about what Angus said.

There are all kinds of ways to make memories that people will not forget. The most effective techniques result in the judge and jury seeing your facts, either literally or figuratively. The point of making memories is to make the judge and jury become “eyewitnesses” to your case.

Demonstrative evidence helps, but it also is your job as an advocate to use the spoken word—mere transitory sounds—to form indelible impressions.

Painting a vivid word picture is one of the most important trial techniques a lawyer can learn. While the very idea of bringing dried facts back to life with mere words sounds daunting, it actually rests on a handful of simple elements and a bit of self-discipline:

• A setting in time and place.

• A touch of humanity.

• Some familiar details of reality.

• An event of magnitude or importance.

• No argument or “persuasive” characterization. The point is to show, not tell.

Here is an example of these principles at work in an opening statement: “When the Bakers got home from their trip to Florida, Mindy couldn’t wait to show her friend Keesha the Minnie Mouse hat with the big ears that she got at Disney World. So the next morning, she called Keesha’s house before 7 a.m., and it took a while for Keesha’s mother to persuade Mindy to wait until after breakfast to come over and play.

“Now it is 9 a.m., and you can see Mindy with her new Disney World T-shirt on, wearing her Minnie Mouse hat with the big ears, running over to her friend Keesha’s house. It’s on the same street Mindy lives on—just four blocks away.

“The problem is, she has to cross Capitol Drive to get there.”

Stop right there. Is there a time in this statement? Certainly. It’s when the Bakers got back from their trip to Florida. No need to clutter your word pictures with details like the day and the date when they don’t make any difference.

Is there a place? It’s home. No need for Mindy’s street address any more than for her telephone number.

Now look at the touches of humanity and reality. They make you care about this little girl—actually feel that you know her—when all you have is a brushstroke or two, not a whole portrait.

The words of visualization are almost transparent: “You can see Mindy … wearing her Minnie Mouse hat with the big ears.”

Their power is derived from the fact that they invite you to form a picture in your own mind—and that is exactly what you do.

Notice there are no words that actually characterize Mindy. You do not have to be told she is a vulnerable, young child. The picture already has shown you that. And you also know she is the apple of her parents’ eyes. After all, they took her to Disney World.

What happens? Mindy puts on her Minnie Mouse hat and starts running over to Keesha’s house.

Is that important? It is when it is linked with the next point. The little story foreshadows something more. Mindy is going to have to cross Capitol Drive, and somehow you already know she is not going to make it.

How do you know that? Because the story hints at the possibility of danger and invites you to play out what happens yourself, in your own mind. You become the storyteller for a moment and it becomes your story—so you already believe what comes next, even before you hear it.

One last point: Where does the self-discipline come in?

The rules for making word pictures are very different from the rules of legal analysis. Lawyers are trained to categorize and characterize—to put things in pigeonholes and label them. That may help legal thinking, but it is the very process that freeze-dries facts in the first place.

So it takes a lot of discipline for lawyers not to argue, not to categorize or characterize people, places and events. After acquiring a legal education, the storyteller’s art of showing instead of telling is counter intuitive.

One way is to use what plaintiffs lawyers call impact phrases. Often they are words of uncomfortable reality, such as wound oozing pus instead of suppurating lesion, or the impact actually tore part of his brain instead of the trauma resulted in a lesion on his left motor cortex. Arrest-ing images like this have their place, but do not overuse them. You don’t want the jurors to think you’re deliberately playing on their emotions.

One dangerous temptation is to use rhetorical tricks. Take alliteration, for example. Without a doubt, a series of words that start with the same sound can make a memory. “This is the case of Fred’s flying Frigidaire” sounds catchy, but it also sounds like a studied attempt to be cute.

And be careful with wild, soaring flights of eloquence. The jurors may admire your forensic skills, but if they think what you are saying comes from verbal talent instead of honest facts, it will cost you plenty. Create the impression that you have actually been to Blarney Castle to kiss the magic stone, and after the case is over the jurors are likely to tell you they all agreed you were the better lawyer—it’s just that the other side had the better facts.

Rhetorical questions, on the other hand, do not deserve their bad reputation—so long as you don’t use them the wrong way. The mistake is to think a rhetorical question is a good way to make an argument. Say a defense lawyer asks, “Could anyone possibly believe that Jay Bennett killed his wife?” It invites the jurors to answer the question in their own minds. And the way it is put makes it easy to say yes.

So instead, use rhetorical questions to focus attention. “What did Mr. Clancy do then?” or “According to her own testimony, how long was Margaret Fuller in the room before she called the police?” These questions get people thinking about the right subject without inviting them to argue with you in their own minds.

Another useful technique is deliberately dropping your voice for a key word or two so everyone perks up and listens closely. Just don’t keep it up too long, or people will decide it’s not worth the extra effort to pay such close attention and will actually tune you out.

But of all the different ways to make a memory, the one to master is the word picture. It is what the great English barrister Sir Edward Marshall Hall (1858-1927) was talking about when he said, “I have no scenes to help me, and no words are written for me to say. There is no back-cloth to increase the illusion. There is no curtain. But out of the vivid, living dream of somebody else’s life I have to create an atmosphere—for that is advocacy.”

The ABA Journal is occasionally reprinting some of Jim McElhaney’s most popular columns from past years. This article originally appeared in the Journal’s May 1998 issue under the headline “Making Memories.”