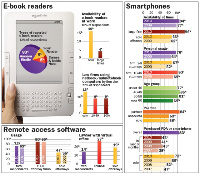 The mobile movement of work onto handheld devices and wireless connections has swept up the legal profession in its path, the 2010 ABA Legal Technology Survey Report shows. From e-readers and netbooks to remote access software and virtual offices, the annual survey shows more lawyers are using more technology to do their work outside the confines of the law office.

This year’s survey contained 144 questions and was e-mailed to 12,500 ABA members in private practice. The results are based on tabulation of 882 completed questionnaires.

Oh, and remember that ABA Journal headline of September 2008: “Web 2.0 Still a No-Go”? Back then only 15 percent of respondents had joined a social network. Asked this year whether they personally maintain a presence in a social network such as Facebook, LinkedIn, LawLink or Legal OnRamp, 56 percent of respondents answered affirmatively, compared with 43 percent in the 2009 survey. And 10 percent report they have had a client retain their legal services as a result of their use of online communities or social networking.

The six-volume 2010 survey report became available in July and may be purchased through the ABA Web Store.