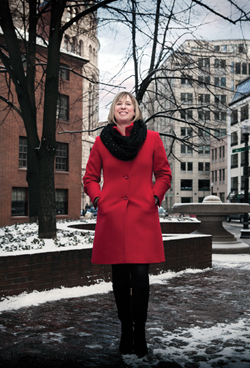 Women starting companies just don't get the breaks men do.


Women starting companies just don't get the breaks men do.

"Let's be frank," says Barbara Clarke, a Boston-based angel investor with Astia, "there's a tremendous amount of sexual harassment and, I'd say, bad behavior in the startup community. I've had really brilliant CEOs say, 'Why don't you get a guy to run this company and we'll invest?' "

Nancy Cremins, a feminist who handles disputes faced by entrepreneurs and emerging companies, is looking to change that. Early last year, the Boston-based partner at Gesmer Updegrove teamed up with Liz O'Donnell, a public relations and marketing exec who also specializes in emerging businesses and runs the Hello Ladies blog.

Their launch? SheStarts, whose mission is to create an ecosystem that supports female entrepreneurs.

"When you go to startup events, women make up a small minority of participants," Cremins says. "We thought: 'How do we create an environment where we can bring women entrepreneurs together, as well as the people who can help them—like service providers, investors and people who have tech expertise and all the things you might need to grow your company?' We wanted to do it in a way that feels authentic and comfortable and to really build a community."

SheStarts hosted its first event in February 2014 and has held quarterly events since. This year it expanded to six events annually.

"We started with a very informal networking event with about 40 people," Cremins says. "We had everybody introduce themselves, explain what they do, and mention a problem they were having. It was an opportunity for people to see if they could solve another's problem or suggest someone who could."

During that event, Cremins heard loud and clear that attendees craved guidance on developing a pitch for their startups.

"We surveyed the crowd, as well as people who couldn't make it to the event, and pitching was far and away the thing they needed the most help with," she recalls. That became the theme of the second event. The third featured a discussion of panelists from a range of startups—one in biotech, one who launched a device, another in fashion technology, and a fourth who began a service company —revealing what they wish they'd known before starting.

For Amrita Aviyente, co-founder and CEO of Date My Wardrobe, an online market for renting, selling or showcasing your high-end fashion, SheStarts is about building women's confidence.

"They don't know how capable they are," she says, "but when they see other women doing it and hear their stories, they're much more willing to take a risk."

And the group is making Clarke a better investor. "It helps me in many ways, and it's a virtuous circle," she says. "The more companies I see, the better I am at honing my own skills at judging startups myself."

Cremins, however, is looking for even more signs of success. "I wish I could say we found an angel investor who invested $1 million in a business and the business is doing great—and I anticipate we will," she says. "Right now, the victories are there, but they're more modest. People are making connections. I hear back that this person met that person, who was super helpful or will be able to help this person launch or grow."

Cremins herself has benefited from a similar network of women.

"I've found the more senior up the ladder you go, the fewer people you see like you," she explains. "I've been a board member of the Women's Bar Association of Massachusetts for a long time. It's given me support and a community where I felt I could talk about things, be myself, and get advice and mentoring that's helped me have a successful career. To me, that was essential to finding career happiness."

When Cremins started hearing from friends that starting a business can be lonely and isolating, she drew on that women's bar experience to form SheStarts. Cremins readily admits the group could become a pipeline of business for her law firm, but contends that's not the only reason she began it. "I care about gender equity."

"When I learned more ... about the entrepreneurial ecosystem and how funding isn't merit-based—and that it's not at all equitable between women and men—I wanted to do something about it," Cremins says. "I can do something where I am, and this is what I can do. That's why it started."

This article originally appeared in the March 2015 issue of the ABA Journal with this headline: “Women's Work: Law partner creates SheStarts, a group to help female entrepreneurs.”