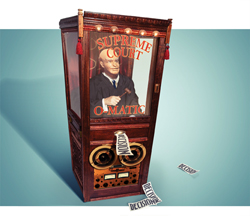 Think you know how the U.S. Supreme Court is going to rule on a case? You might want to test your accuracy against the Supreme Court predictor, a statistical model that, using only data available before the date of the decision, predicted 60 years of high court decisions (1953-2013) with about 70 percent accuracy.

The predictor is the brainchild of law professors Josh Blackman, Michael Bommarito and Dan Katz. It is based on a mathematical concept called the ensemble tree model, which adapts and changes as it gains more information, Blackman says.

"The goal of ensemble is to find out what people do better and what computers do better, and then we can calibrate them to judge appropriately," says Blackman, an assistant professor at South Texas College of Law. "This isn't about computers running roughshod over lawyers. This is about using intelligence to make the best decisions."

The Supreme Court predictor is not the end goal, but a launchpad for further research—all the code is available online for other developers to build on, according to Katz.

"One of the things we're trying to highlight here is that there's a science going on [in predicting court decisions] and you can use the tools of science to better understand them," Katz adds.

Blackman plans to pit the predictor against his FantasySCOTUS league during the court's current session.

While the profs think humans will win this year, they expect the computer model to succeed in the future.

And it's not just for fun. Blackman sees a "strong enough market for lower court analytics that this will eventually come there and be in widely available use for lawyers at that level."

This article originally appeared in the December 2014 issue of the ABA Journal with this headline: "Beat the Computer: Law profs develop an analytical tool to help better understand court decisions."