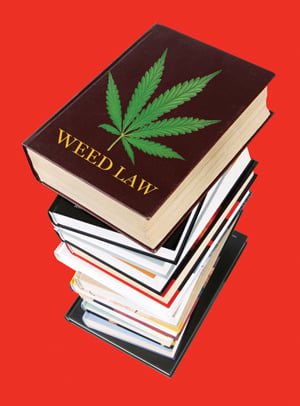 Don't be fooled by the subject matter of "Representing the Marijuana Client," a new course being offered by the University of Denver's Sturm College of Law. Pot may give people the giggles, but professor Sam Kamin says his class is designed to meet a serious need.

Kamin believes his is the first law school to focus on marijuana law. "Since I announced the course, we've had interest from city attorneys, from the state attorney general, from the [Colorado] Department of Revenue," he says. "I think they're anxious to have well-trained lawyers that can speak this language when they graduate."

Denver law students also took note as the class filled up quickly. Kamin says students from other schools and even practicing lawyers have asked to take it.

Kamin may be uniquely qualified to teach the class. He was on Colorado's Amendment 64 task force, which advised the state government on how to implement legalization, and now is serving a similar role on a legalization panel created by the American Civil Liberties Union of California. He's also authored many scholarly and popular articles on marijuana regulation.

Nonetheless, he says nobody could teach every part of the course alone because marijuana law touches on so many fields, including tax, real estate and land use, employment and legal ethics. Kamin plans to bring in businesspeople and lawyers who work with marijuana to talk about their legal challenges.

He also must deal with the challenge of teaching a class in a developing area. After the course was announced, Oklahoma and Nebraska sued Colorado, alleging that marijuana legalization has increased crime in neighboring states. The Colorado Supreme Court is also considering whether employers may fire employees for using medical marijuana during off-hours.

This article originally appeared in the May 2015 issue of the ABA Journal with this headline: "Weed 101: Law school offers a marijuana law class."