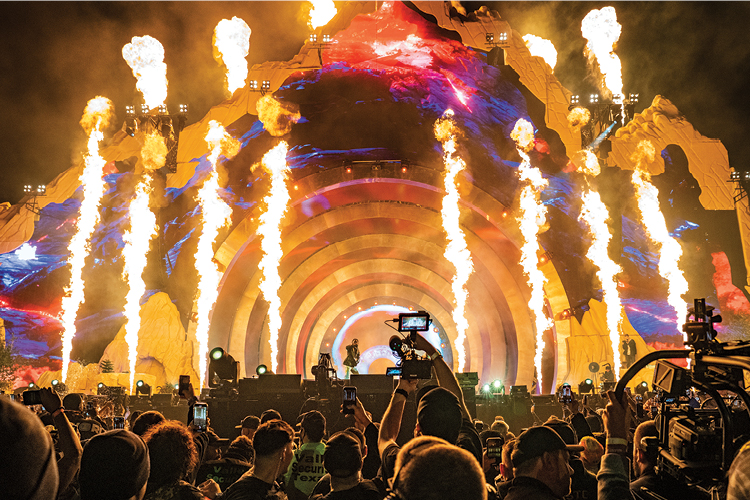 Astroworld 2021 was hyped as more than just a concert.

Multiplatinum-selling rapper Travis Scott founded the annual music festival in his hometown of Houston in 2018, and this latest iteration promised to be the best yet.

The two-day festival kicked off Friday, Nov. 5, with tens of thousands of people filling the sprawling parking lot-turned-festival venue of NRG Park. Bands had played throughout the day on a secondary stage, and Scott was set to perform on the main stage at 9 p.m.

Fans started claiming prime spots in the standing room-only space surrounding the main stage hours in advance; by showtime, the crowd had become a seemingly endless, undulating mass of raised arms and glowing phones. Scott took the stage with a video of a giant volcano erupting behind him, launching into his first song of the night, “Escape Plan.” By the third song, the crowd was engulfed in chaos.

In all, 10 people in the audience died from injuries they sustained in the pressure-packed crowd that night. The youngest was a 9-year-old boy. According to the Harris County Institute of Forensic Sciences, they all died from compression asphyxia when the pressure of the crowd against their chests prevented them from breathing. Approximately 300 people were treated at the scene for injuries, and 25 were transported to hospitals, according to news reports. Astroworld 2021 had become one of the deadliest concerts in U.S. history.

Not surprisingly, lawsuits ensued against Scott, concert promoter Live Nation and others. By May 10, hundreds of lawsuits brought by nearly 5,000 plaintiffs had been consolidated under a single docket number to streamline pretrial proceedings.

The reason for relying on negligence, says law professor Tracy Hresko Pearl of the University of Oklahoma College of Law, is that there are virtually no state or federal laws that address crowd crush. Pearl has written extensively on the issue, including a 2015 Kentucky Law Journal article, “Crowd Crush: How the Law Leaves American Crowds Unprotected,” and a 2021 op-ed in the Houston Chronicle specifically about Astroworld.

“Neither common law nor statutory law have required or incentivized event organizers or venue owners to take any action to manage crowds efficiently,” Pearl says. “It’s not that we don’t have laws pertaining to concerts—we have restrictions on trash and regulations that determine how many ambulances need to be on-site—there’s just nothing requiring any advance thought with regard to crowd crush.”

In crowd crush cases where negligence is at issue, a duty to the plaintiff must first be established. Pearl says courts then will often look to the artist’s behavior or the crowd’s behavior to determine reasonable foreseeability. But this type of analysis, she says, is wrong.

“We see lawyers relying on faulty or even racist conventional wisdom like, ‘It was a rap concert, what do you expect?’ or ‘If you hadn’t behaved like that, you wouldn’t have been injured,’” she says.

Indeed, there’s ample fodder for such analysis in the Astroworld cases. Scott is, after all, a rap superstar who spits profanity-laced lyrics and encourages his concert crowds to “rage”—his term for the level of physical commitment he (and his fans, called “ragers”) believe necessary for an ideal experience. He once said he wanted his concerts to feel like a World Wrestling Federation event, and he’s been in legal trouble for encouraging dangerous crowd behavior during his shows, most recently in 2017 when he was charged with three misdemeanors including inciting a riot and disorderly conduct (he pleaded guilty to disorderly conduct).

But instead of a rush to judgment, Pearl believes foreseeability in crowd crush cases should rely on crowd science, a field of study based in physics that determines how large groups of people behave in a physical space.

Beginning in the 1980s, experts started studying crowd crush incidents around the world, and they have determined that the risk of crowd crush is connected to crowd density, meaning the number of people per square meter in a given crowd.

At this density, people lose the ability to control their movement “almost completely” and the crowd begins to be randomly displaced en masse according to principles of fluid dynamics, she explains. According to research, she says, crowds at this density can exert forces of more than 1,000 pounds—strong enough to bend metal barriers and also to crush people.

“Scientifically, it doesn’t matter what the demographics of the crowd are—there have been crowd crushes at church picnics and Christmas performances at Radio City Music Hall,” she says. “It also doesn’t matter whether an artist is trying to exacerbate a dangerous situation or not, because if you were thoughtful about how the crowd was oriented in the space, no amount of rowdiness is going to result in a crowd crush.”

Further, determining a crowd crush case based on details about the artist or the audience might be more than just misguided. It also might be unfair, says Jack I. Lerner, clinical professor of law at University of California, Irvine School of Law and co-author of Rap on Trial: A Legal Guide for Attorneys.

“There is 25 years of social science research showing that as soon as you tell a jury that something is rap, you create an incredibly strong risk of bias,” he says.

Lerner points to studies that show violent and sexually explicit lyrics are more likely to be considered literal and offensive when they’re characterized as rap music rather than if the genre is called country, heavy metal or folk.

But Pearl points out that bias isn’t just an issue with rap. For example, in a 2008 crowd crush case at Walmart, shoppers injured during a Thanksgiving doorbuster sale were described as animals stampeding for a discount, she says, “when the reality is, you could have looked at the density of the crowd that had gathered outside and then had to navigate a bottleneck in entering the store and predicted it was going to happen.”

Ultimately, trial tactics might not matter in the Astroworld case if it, like similar cases, settles before trial.

“Nothing good happens for [Live Nation] if they go to trial,” says Southern California personal injury lawyer John J. Perlstein, who wrote a January 2022 Forbes.com article on a crowd crush injury at a 2019 Harry Styles concert and represented plaintiffs in the 2017 Las Vegas concert shooting.

Whatever happens, it will forever remain a tragedy. “There’s no joy, no happiness,” he says. “The family gets money, but the loss never goes away.”

This story was originally published in the December 2022-January 2023 issue of the ABA Journal under the headline: “Astroworld Disaster: Laws are needed to prevent crowd crush, expert says.”