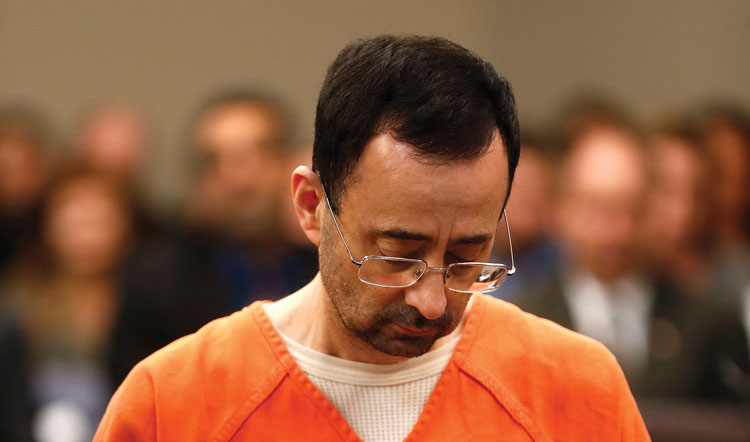 Marisa Kwiatkowski: “For our investigations, we rely on documentation and evidence, so court records can be a really important part of that process.” Photograph courtesy of Luke Cooley/IU Kelley School of Business Indianapolis

S. Derek Bauer: “A case like this helps us re-establish the importance of an independent free press.” Photograph courtesy of Baker & Hostetler

The sentencing of Dr. Larry Nassar for molesting young gymnasts and USA Gymnastics’ alleged complicity riveted the nation for months. More than 150 girls and women read impact statements during Nassar’s sentencing. But it was a lesser-known lawsuit and partnership between investigative journalists and lawyers that helped crack the case wide open and make it front-page news.

In 2016, Indianapolis Star reporter Marisa Kwiatkowski was working on a story about sexual abuse when she received a tip urging her to contact W. Brian Cornwell of Cornwell & Stevens in Savannah, Georgia. Cornwell, along with Jeffrey Lasky of Lasky Cooper Law in Savannah, was working on a Jane Doe sexual abuse case against former USA Gymnastics coach Bill McCabe. During discovery, the attorneys had received 54 complaints against other gymnastics coaches, which the judge had sealed.

Kwiatkowski immediately flew to Georgia, where she reviewed records in the case, and began tracking USA Gymnastics’ vast ecosystem of sexual misconduct complaints. “For our investigations,” Kwiatkowski says, “we rely on documentation and evidence, so court records can be a really important part of that process.”

The newspaper hired partners S. Derek Bauer and Ian K. Byrnside of Baker & Hostetler in Atlanta to gain full access to the sealed documents, including the 54 coaching complaints. Bauer and Byrnside regularly represent media companies in First Amendment, public records and courtroom access cases, and they filed a motion to have the records unsealed. Still, no one predicted the magnitude of what would happen next.

While awaiting a hearing on its motion, the Star published its first USA Gymnastics story, “Out of Balance,” in August 2016, revealing the organization’s policy of not reporting all sexual abuse allegations against its coaches. After the piece went live, two women contacted the newspaper and shared their experiences of abuse at the hands of team doctor Nassar. The story exploded from there. On Sept. 12, 2016, the Star published its first detailed account of the Nassar allegations.

“This case is a textbook example of how important the media is,” says Bauer. “The Indianapolis Star never quit. That kind of commitment to investigative journalism on issues of significant public importance needs to be commended and acknowledged so our media will continue to do it.”

Bauer hopes the impact of this case demonstrates how journalism and the law can work together for the public good.

“Our job is harder on a day-to-day basis for the media,” Bauer says. “A case like this helps us re-establish the importance of an independent free press to our way of life and improve outcomes for the public’s right to know in cases that may not have quite the same public significance as the … USA Gymnastics case, but are nonetheless still vital to our constitutional democracy.”

Kwiatkowski says she’s humbled by how the story turned out. “I think about the justice; about all the survivors who have trusted us with their stories.”

Cornwell’s lawsuit against USA Gymnastics ended in a confidential settlement in April. “Nassar’s just the tip of the iceberg,” he says. “If people think Nassar’s bad, they need to understand the scope of the problem with USA Gymnastics coaches.”

This article was published in the June 2018 issue of the ABA Journal with the title "The Behind-the-Scenes Case That Helped Expose Larry Nassar: A story of lawsuits, leads and old-fashioned legwork."