Lawyer at Large: Minnesotan Fulfills His Dream of Visiting Every Country

Like Johnny Cash, John Rheinberger can sing “I’ve been everywhere, man, I’ve been everywhere.” To date, Rheinberger, a tax and estate planning lawyer in Stillwater, Minn., has visited 193 countries recognized by the United Nations, plus Vatican City, Taiwan and Kosovo for a grand total of 196 places. His wandering started in 1978, six years before he became an attorney, and most recently took him to the tallest building in the world in Dubai. “It’s a little misleading—they say it’s 201-plus floors,” Rheinberger notes. “It’s actually 164 usable floors. The elevators are very narrow.

“If you’ve ridden the elevator within the Empire State Building or the Seattle Space Needle, you can definitely feel the motion. But the elevator in Dubai was so smooth that, all of a sudden when the doors opened on the 124th floor, it was as if nothing happened.”

Aside from catching a lift to the top of the world, what motivates someone to want to visit every country on the planet? “I remembered the dreams of a child,” Rheinberger explains, “the books and movies that interest you when you’re young, like The Adventures of Tom Sawyer or Around the World in 80 Days. I was also inspired by a movie called A Boy Ten Feet Tall, about a boy who walks all the way through Africa to stay with his aunt.”

One of his early trips mirrored that movie as he traveled “from Cape to Cairo” on the continent.

Rheinberger maintains a treasure trove of pictures from around the globe, most taken with a simple point-and-shoot camera. He does not have a trophy room, though, limiting his global souvenirs to passports and coins.

Having seen so much, Rheinberger has a unique perspective on which stops affected him the most. “Some places are great for the moment you’re there,” he says. “I’d say Brazil, South Africa and Australia are like that. For sheer beauty, it’s hard to beat Brazil. There was the time I went down the Amazon. There’s the White and the Blue Nile rivers within the Sudan, where they come together. Lake Victoria. Those are moments.”

THE BENEFITS OF WANDERLUST 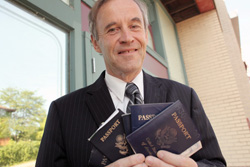 Asked about his travels’ effect on his law practice, Rheinberger says, “It’s a good icebreaker. It’s an indirect form of advertising and helps clients put a name with a face because they’ve seen me in the newspaper or on television. It tends to pull you out of a crowd.” But how does a lawyer find the time?

“I generally took two trips a year, one in the spring and one in the fall,” he says. “I’ve really had to watch the timing, but seldom more than 10 days at a time. And I generally hit more than one place on a trip. Once in the beginning, I took an eight-day trip to Europe and did a country each day.”

And over the years the travel has changed. “When I started, it wasn’t easy to stay in touch with the office overseas—I soon became an island when I left,” he recalls. “In a way, I’ve been very lucky in that we didn’t have a real world war, and because of the worldwide use of credit cards.” After his most recent trip to the Middle East in February, he says wistfully, “There’s no place to go.”

Rheinberger always travels by himself. “The only way you’re going to be able to see the world is, unfortunately, going alone,” he notes.

Occasionally, however, his sister, Margot, and their 91-year-old mother come along during his travels in the United States. Margot shares her brother’s wanderlust on a smaller scale—she’s been to 62 countries. Especially this one. “Mom and Dad took us to every state,” she recalls.