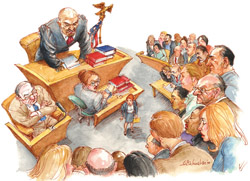 Barbara Swanson looked numb. “What’s the matter?” I said. “Bad verdict?” “That’s the understatement of the day,” she said. “Lost a case I should have won.”

“We’ve all done that,” said Angus.

“Oh, I know it,” said Barbara. “Those are the cases that are supposed to teach you something. But my problem is I don’t know what I’ve learned—if anything. I gave this case everything I had. But the jury wasn’t buying what I was selling.”

“Everything is turned upside down,” she said. “People are unhappy about lawyers, judges, the system, plaintiffs, defendants—everything. They’re hostile, suspicious, naive, trusting, hard-nosed and compassionate—all at the same time.”

“Jurors, you mean?” said Dick Mudger. “They’ve always been like that.”

“I agree with Barbara,” I said. “It’s worse than it’s been. Take the recent unpleasantness in Los Angeles.”

“I don’t talk about it by name,” I said. “Not so much because of the result as because of the way it was tried. Lawyers, judges, juries and reasonable doubt have all taken a real beating because of that case.”

“It’s happening with civil cases, too,” said Flash Magruder, the plaintiffs lawyer. “The coffee-spill case, the woman who’s suing a kid because she got hit by a baseball at a Little League game, the compulsive gambler who is suing everybody in sight because they didn’t protect him from his compulsive gambling—they have all helped create the notion that lawyers and lawsuits can’t be trusted.

THE RULES OF THE GAME

“It doesn’t matter whether those cases have any merit or not,” said Flash. “Radio, TV and the newspapers have been using those cases to play on public opinion like a harp. And it’s really making it difficult to try a case.”

“Making it all the more important for lawyers to conduct jury voir dire themselves,” I said.

“Right,” said Barbara. “Voir dire is becoming more important just as more judges are cutting it back or taking it away.”

“Yeah,” said Flash. “Unless you talk to the jury yourself, you really don’t know what kind of spin to put on a case these days.”

“Maybe trying to put a spin on a case is part of the problem,” said Angus.

“What do you mean?” said Barbara.

“Let me ask a question,” Angus said. “What’s the point of this adversary system we all talk about?”

“That’s easy,” said Barbara. “You have each side present its own evidence and attack the other side’s case—making the strongest arguments they can. It’s supposed to put the judge and jury in the best position to make a rational decision between the two. That a good enough answer for you?”

“Of course,” said Angus. “And the logic of this battlefield mentality that the law professors lionize leads inevitably to attacking whatever your opponent says or does—right?”

“Right,” said Barbara. “That’s the way you play the game.”

“So the adversary system helps push the lawyers to the polar extremes of the case,” said Angus. “They don’t talk about the other side’s mistakes; they rant about the opponent’s outrageous misconduct. They deliberately overstate their own positions because they think that’s what they’re supposed to do.”

That’s when Myra Hebert, the president of the local bar association, joined in. “It’s called advocacy,” she said. “You got a better idea?”

TRUST ME, TRUST MY CASE

“If you talk to enough judges and jurors,” said Angus, “you learn their biggest fear is that they will make a serious mistake—do an injustice—because they were led astray by some tricky lawyer.

“Jurors are suspicious of lawyers in the best of times. Somehow I don’t think the situation has gotten any better in recent years.”

Angus looked at Myra for a second. “That pushing a case too hard is even more dangerous now than it was a year or so ago,” he said. “That acting tough with the other side, pushing witnesses around, stretching every fact as far as it will go, arguing every issue beyond the point of reason, exacts a price.

“I want to be the most reasonable lawyer in the courtroom,” said Angus. “I want to be considerate. I want to be fair. I never want to look technical or tricky.

“I like the idea of reasonable arguments,” said Barbara, “but give me a ‘for instance.’ ”

“Sure,” said Angus. “Say you represent the plaintiff in a medical-malpractice case involving a young woman who was in a minor automobile accident in a shopping center parking lot. Her car wasn’t going very fast, but she wasn’t wearing her seat belt.

“By coincidence, she had a doctor’s appointment that afternoon because of a sinus infection. While she was there, she happened to mention that she had been in a little fender-bender that morning and was feeling some minor physical discomfort. Had he pursued it, there were some tests the doctor could’ve done that might have alerted him to the possibility of a ruptured spleen—something a doctor should consider if a patient has had a blunt trauma to the abdomen.

“But he didn’t think it was serious enough to check any further. He gave her antibiotics for her sinus infection and some painkillers for muscular pain and sent her home—where she died about eight hours later. She bled to death from a ruptured spleen.

“You represent her husband in this case for wrongful death. Never mind right now about the exact medical details. Your theory is that the doctor missed making the right diagnosis. Your expert says the doctor should have run those tests. The doctor’s expert, on the other hand, insists the tests weren’t indicated.

“So how do you handle the case?” said Angus. “How do you talk about what the doctor did? Do you hammer him for gross negligence? Do you try for punitive damages if the rules let you? Do you ask the jury to send a message to the medical community that we are entitled to a higher standard of medical care than that? Do you tell the jury he killed this young woman just as surely as if he had watched the blood pour out of her veins and did nothing to stop it?”

“I don’t know,” said Barbara. “Seems to me you’d be telling the jurors they have to hate the doctor.”

“Right,” said Angus. “And if they don’t hate the doctor—if they like him—they may have a hard time going along with you when you talk that way. You need a reasonable argument that will take some of the magic out of being a doctor, that will put him on the same footing as everybody else. That’s what the ‘oil change argument’ was designed to do. It goes like this:

“ ‘Martin Collins is a good doctor. He cares for his patients and he tries to do a good job. You know that from having listened to him testify in this case. But he made a mistake. He missed an important diagnosis. One he should have made.

“ ‘That doesn’t make him an evil man. He didn’t want to hurt anyone. He just made a mistake. But the mistake he made took the life of a young woman. So now it’s your job—and it isn’t an easy one—to tell him that he is responsible for what he did.

“ ‘How is this going to affect Dr. Collins?

“ ‘Suppose you took your car to a gas station to have the oil changed and the chassis lubed. And because something was wrong with the oil pressure gauge, you asked them to see if they could fix that, too.

“ ‘You like this gas station. You’ve been going there for years. It’s right in the neighborhood, and a lot of your friends take their cars there, too. When you pick up your car, they tell you they changed the oil, but they had to order a part for the oil pressure gauge so they won’t be able to fix it until next week.

“ ‘Now what happened was, they made a mistake. They drained the oil, put on a new filter and lubricated the chassis. But they forgot to put new oil in the engine. And before you got halfway to work, your car stopped dead. The engine was frozen solid—ruined—because there wasn’t any oil in the crankcase.

“ ‘They made a mistake. They’re responsible for what they did. And it’s their obligation to compensate you for the loss they created. It’s still a good gas station. People still take their cars there. That hasn’t changed because they had to take responsibility for what they did.’ ”