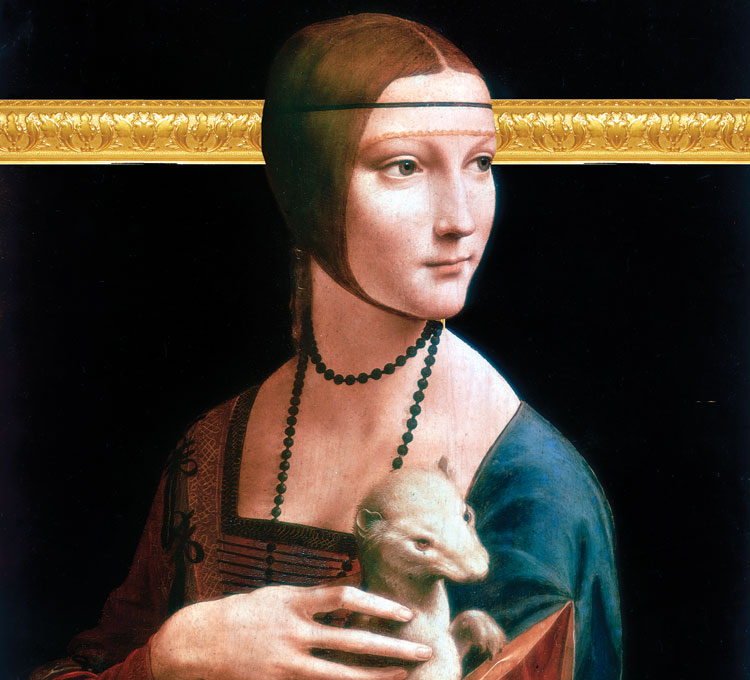 “Lady with an Ermine,” circa 1490 by Leonardo da Vinci, is a portrait of Cecilia Gallerani, mistress of the Duke of Milan. Photo by Art Media/Print Collector/Getty Images

With winter’s chill now in full force, I recall sitting in a beach chair in late August on a spit of sand on the rocky Maine coast reading Walter Isaacson’s marvelous book Leonardo da Vinci. I have been completely absorbed by the book, and it seems as if I have not lifted my head from the pages since midday. When I finally look up, the sun is setting beneath the clouds behind me. I listen to the song of the late-summer cicadas set against the lap of the waves. Shadows spread out over the ocean, and the sunlight ducks below the layer of clouds and cuts in perpendiculars, skimming across the surface of the ocean. As I read Leonardo and view the reproductions of his masterpieces, I seemingly have a heightened visual sensitivity, almost as if nature is attempting to convey some unspecified meaning in its own shifting images.

Everything changes as it moves, and—as if adhering to Leonardo’s sfumato technique—borders between sky, surface and shadow shade gradually into each other. Leonardo was certainly right that there are no clear lines of separation in either nature or in art. Unfortunately, however, I am a lawyer, not an artist. My professional identity is built upon drawing separations and distinctions, marking clear lines and adhering to rules and boundaries. And the emotional meaning of the unfolding scene before me is elusive; it needs the hand of an artist, purposely shaping the imagery into an apparent narrative meaning.

I write out notes and observations in longhand on a legal pad as I read through the book.

I have loved Isaacson’s previous books on Steve Jobs, Einstein and Ben Franklin. These books provide compelling biographical stories. They are also intellectual biographies that reveal the genius of their subjects in ways that general readers—including lawyers—can comprehend and appreciate.

But the new book is something more. It is a gorgeous volume replete with reproductions of Leonardo’s masterpieces—a stunning and visually compelling book. The pictures are abetted by Leonardo’s own words and illustrations drawn from more than 7,200 remaining pages of his codex (notebooks), supplemented with Isaacson’s clear-headed and jargon-free explanations of Leonardo’s art and his scientific, anatomical and naturalistic revelations.

The book is a visual primer of sorts and suggests how Leonardo seemingly discovered whole-cloth modernity in visual representation, articulating incorporating foundational “principles” of narrative composition into his story paintings.

Why the artist matters to lawyers today

We are, I believe, now rapidly traveling “back to the future.” We are entering what communication theorist Walter Ong predicted in the mid-20th century would be a return to “post-literacy.” In Leonardo’s own time of the early Italian Renaissance, the birth of the printing press and a new print-based technology was transformative in science, art and the humanities. The new technologies of print soon gave birth to transformative forms of storytelling, including the novel, our predominant narrative form for complex storytelling well into the second half of the 20th century.

In our own time, however, the proliferation of new visual and auditory technologies have shifted us away from print, away from printed stories anyway, especially the complex narratives of the novel. In so many ways and for so many of us, we have returned to a more unmediated visuality and orality—the images and sounds dominant in movies and television and media-based technologies. Soon, there will be sense-based simulations, too.

Lawyers, whose practice is in large measure a storytelling practice, need to better understand the importance of visual literacy—how to read and construct complex images, supplementing analytical and critical reading skills.

To become more effective practitioners of visual storytelling, we can draw upon lessons from other master-practitioners of visual narrative crafts. And who better than Leonardo to teach us? Leonardo, who married his artistic genius with an equally meticulous and endlessly recursive exploration of visual storytelling, reflecting analytically upon how his art was informed by nature, theater, science and anatomy. Leonardo, who perpetually tested his art against “experimental” data obtained firsthand.