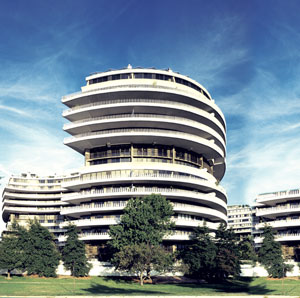 Photo of the Watergate Hotel courtesy of Library of Congress

I enjoyed Bryan Garner’s discussion of the “halo effect” in “The Psychology of Credibility,” May. But I cringed when I read Justice Antonin Scalia’s comment about sloppy writing intimating sloppy thinking.

I love good analogies and crisp writing as much as the next guy; but I was raised by my illiterate grandfather, who is no fool. So I try not to hold poor writing against anyone. (I rarely use “sic”—just make the correction and let it go, man.) For a litigator, criticizing writing is like complaining about appearance—it’s a sign of an intellectual lightweight. By elevating form over substance, the complainer reveals an insecurity that should be visible to a decent judge.

Finally, it bears emphasizing that priming can cut both ways (the phrase “lipstick on a pig” comes to mind). Everyone—especially judges—should be mindful of the halo effect, because the more you experience it, the more likely you are to be duped.

In the article “Watergate and the Rise of Legal Ethics,” January, referring to the period before Watergate, it is stated: “Ethics, if taught at all, was an elective class in law school.” Not so at the University of Alabama School of Law. A course in legal ethics was required for graduation when I graduated in 1963; and it was meant to, and did, sensitize those of us who took it to consider the ethical implications of how we should conduct ourselves as lawyers.

It was taught for many years before and after that by the late professor Harry Cohen. The Alabama State Bar Association adopted in 1887 the first Code of Ethics in the United States, which served as a model for the 1908 ABA Canons of Professional Ethics. Thus, it was with a mixed sense of amazement and horror, flavored by watching the fallout from Watergate, that I first learned of the lack of required ethics training in nearly all of the law schools in the country. I had trouble believing it.

I read with amazement the article “Telling Tales, Eluding Death,” March. I am amazed because I was the first (and only, to date) chief public defender for Texas’ Regional Public Defender for Capital Cases Office and most of what Hans Hansen, quoted extensively, asserts in the article is pure fiction.

Since the opening of the RPDO on Jan. 1, 2008, I have been charged with developing and implementing all substantive policy for the office. While it is true that he was invited to, as writer Richard Acello correctly states, “help with the organizational design for the new public defender’s office,” the specific strategies to be employed by the office were never within the scope of his involvement, even though he suggests otherwise. His consultation with this office was sporadic over a period of several years and ended when I believed his personal beliefs conflicted with the mission of this office.

Statements that he was charged with turning “‘lone wolf” defense attorneys into a team”; the RPDO was contemplated as an “anti-DA’s office”; we would demand money and threaten the judge with reversal; we intentionally drove up the cost of a case using asbestos and $500,000 as an example; the RPDO thinks of prosecutors as bastards—these are complete garbage.

Though I consider Bryan Garner as one of my primary sources for resolving stylistic dilemmas, I have long rejected the dogmatic use of party names espoused by him and others (“A Plaintiff by Any Other Name,” April).

Prior to this article, I had not seen Mr. Garner’s three exceptions. Still, there is an astonishing oversight in the formation of that list: when a party’s role in the litigation is important to the decision at hand. Perhaps invariably, this arises when the issue is procedural. True, one may reasonably expect the jurist to follow the names without the labels, but why task an overly burdened judiciary with remembering the names of each party when a label is sufficient for the matter at hand?

In 38 years of litigation, I have never had either a state or federal court jury charge that did not use the actual names of the parties. I think it is important in trial to use the names as they will be used in the jury charge to avoid any possibility of juror confusion. I think the same clarity is necessary in pleading, motion and briefing practices. I do appreciate the other positions and once was against using the names in some of the situations mentioned.

THE POWER OF HELPFULNESS

Regarding “There’s No Such Thing as Bad Publicity,” April, about law firm marketing: You don’t have to be “slaphappy.” “Stodgy” (professional) works just fine.

My 32-minute vid on how to pass the California DMV’s road test has enjoyed more than 1 million views, and my channel at YouTube has more than 3,000 subscribers. Make a vid that is helpful, and the promotion will take care of itself.