Letters: Before the BP Fund 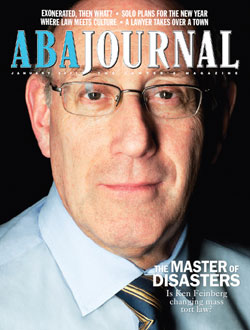 “The Master of Disasters,” January, page 32, suggests that the BP settlement fund is the first attempt by a defendant or responsible parties, and their insurers, to confront a disaster directly by establishing an early settlement fund and attacking the need for unnecessarily high contingent fees to achieve the resolution of legitimate claims.

Thirty-four years ago, after the Pan American/KLM air disaster on Tenerife in the Canary Islands (the largest-ever aircraft accident), Pan Am’s insurers voluntarily created a settlement fund within 30 days. All medical expenses incurred by injured passengers were paid immediately. Within 28 months, all claims were settled or tried, no liability depositions were taken, and the average plaintiffs attorney fee was less than 10 percent. As Pan Am’s lead attorney, I took on the plaintiffs bar directly in every court in which litigation was filed; received the State Bar of California’s permission to directly contact relatives and claimants (suggesting that large contingency fees were unnecessary); fought off the plaintiffs bar’s attempts to thwart my efforts; made early, reasonable settlement offers; and managed eight trials where verdicts were equal to, or within 10 percent of, the settlement offers.

All too often this approach is not followed because of the large fees plaintiffs counsel and defense counsel can earn through protracted litigation. There is no reason why the BP defendants collectively can’t “no contest” liability, and let the multidistrict litigation judge begin trying damages within a few months. The corporate defendants would be wise to corral their outside counsel and save their internecine squabbles over liability (that will only substantially increase the total cost) until after most, if not all, of the legitimate claims are resolved. Judge Robert Ward of the Southern District of New York oversaw the Tenerife MDL and proved that a concerned and active judge can bring complicated litigation to a conclusion without exacerbating the costs and trauma to the victims.

RELEASED BUT NOT RESTORED

Regarding “The Real World,” January, page 50: I know the feeling because I have experienced it and am still experiencing it.

I spent 34 years in the Illinois Department of Corrections for a crime I did not commit. Upon release I was given $34.41 and told it would help me go out and create a life for myself. While it is difficult to find a job, when you do you are still at a disadvantage because you are not going to be paid what you are worth because of the fact that you have been in prison.

Restoration to useful citizenship in line with the mandate of the Illinois Constitution of 1970 should include employment: That is the one thing that is most needed upon a person’s release, whether you were innocent or guilty. After being out four years, I am still struggling and trying to understand this society; with the way things have been going, I seriously doubt if I ever will.

“Social Media or Snake Oil,” January, page 26, blames the technology. That distracts from the real problem: Lawyers exhibiting bad judgment when it comes to ethical behavior. They could have used any technology, even centuries-old ones like pamphleteering—and gotten themselves in the same trouble.

Why is this important? Because troglodytes and luddites will distinguish themselves from the behaviors exhibited in this article, taking the cue from the theme that it’s the social media’s fault, to objectify the subjects and their misfortune with the false consolation of “I don’t use social media, so it can’t happen to me.” And they’d be wrong.

Post on a blog, send a tweet, write a letter, pick up the phone, stand on a soapbox in the market square, and you too can violate your professional responsibilities.

The confusion surrounding what may or may not be appropriate via social networking is nonsense. What would be unacceptable in person is and should be unacceptable through the computer. Does anyone really think it would be acceptable to “friend” an adverse party represented by counsel? Or make statements to others in a basically open but restricted forum that would otherwise be inappropriate, simply on the basis that they were made through a social networking site?

Perhaps there is a competency issue when there is an inability to reasonably apply the law to alternative facts. There is no genuine need to further entangle the rules. James Madison warned: “It will be of little avail to the people that the laws are made by men of their own choice if the laws be so voluminous that they cannot be read or so incoherent that they cannot be understood.”

REACH OUT FOR STARTUP HELP

Regarding “Starting Up,” January, page 40, about financial strategy when hanging a shingle: Look for other solos or small firms to network and bounce around ideas with. Most established lawyers are happy to talk about what has worked for them.

photo at odds with article

I am disturbed by the racist presentation of Capital University professor Floyd Weatherspoon’s work (“Field Studies,” January, page 11). When I saw the photo accompanying the article, I was surprised by how young Weatherspoon was. Then I saw the photo credit for iStockphoto.com, indicating that your magazine chose to run a stock photo of a young African-American man rather than a photo of the professor (or no photo at all).

By running a stock photo, you send the message: “Here is what an African-American male looks like, because you probably don’t see them that often.” This, combined with the headline, “Field Studies,” makes the article seem like an anthropological observation of “the Other,” the African-American male. This is horribly offensive and completely at odds with the point of Weatherspoon’s work. It is also at odds with the stated goals of the ABA. However, it appears from this layout that the ABA believes its audience to be exclusively white. In the month of Dr. King’s birthday, this is as far as the ABA has come? How terribly sad.