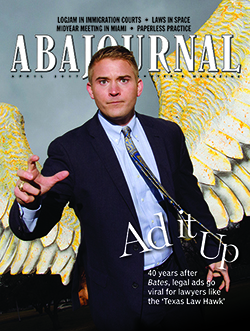 Regarding “Decision Dylan,” April: At the 2017 Innocence Network Conference in San Diego in March, California Innocence Project Director Justin Brooks belted out a rousing rendition of Bob Dylan’s “I Shall be Released” with over 100 exonerees in the audience. It was the perfect song for that time and place. Dylan is like that.

THE IMMIGRATION ACT iS NOT BROKEN

A key to solving the immigration court backlog and structural issues described in “Legal Logjam,” April, would be for Congress to update existing sections 249 and 245A of the Immigration and Nationality Act.

Section 249, the registry provision, could be amended to authorize undocumented people present from—as a proposal—2005 to register, obtain permanent residency and continue with their work, schooling and lives inside the United States. A criminal record would bar approval.

The current date for use of the registry provision on U.S. Citizenship and Immigration Services Form I-485 requires proof of undocumented presence since 1972. Prior registry dates enacted by Congress have been 1921, 1928, 1940 and 1948. Congress could take comfort in the judgment of previous lawmakers and change the date from 1972 to 2005.

Section 245A, the legalization provision enacted in 1986, could also be updated to perhaps 2012—from 1982—and thereby legalize workers and their families who more recently arrived outside the administrative visa system planned by Congress.

These twin changes to dates in the existing act would reduce immigration court caseloads and can be justified for economic, humanitarian and national defense reasons.

The problems with the Executive Office for Immigration Review’s immigration courts would be greatly reduced by enacting two new dates. Caseloads would drop as eligible respondents opt to register or legalize. The Immigration and Nationality Act need not be declared broken.