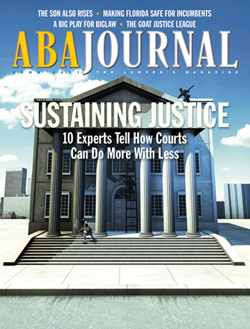 1) Eliminate all conferences and personal appearances except in extraordinary or emergency situations.

2) All motions and appeals should be submitted unless the court deems argument necessary.

3) Better training for judges, especially in the area of temperament; 10-year term limits; and removal if reversed more than their colleagues.

4) Only certified trial attorneys should appear in court.

All of the above are practical solutions that are easy to implement and would produce immediate results.

The glaring omission from these cost-savings suggestions for courts is to replace live court reporters with digital court recording. The state of Kentucky—yes, Kentucky—paved the way for courts around the world to use video as the official record of the court.

Kentucky estimates that video court recording saves the state more than $24 million per year and costs the court around $20 per day. In comparison, an experienced, live court reporter costs more than $20 per hour. Kentucky’s state courts no longer employ a single court reporter. If an attorney wants a transcript, the attorney pays to have a verbatim transcript created from the video record. This method has been wildly successful now for only 20 years. It’s time the whole country caught up with Kentucky and started saving taxpayers hundreds of millions of dollars nationwide by using video court recording instead of live court reporters.

What about all those jobs? Well, the best workers will be re-employed as court transcriptionists in the private economy with a private company or will hang out their own shingle for business from local attorneys. Others might become a “digital court reporter,” as has happened in Florida, where a single reporter assists multiple courts simultaneously at far less cost than a live court reporter for each courtroom.

It is estimated that California could save more than $100 million a year by implementing video court recording.

Regarding “Homogeneous,” June: What exactly was the point of the notice?

As far as I am concerned, the fact that three states have all-male benches is irrelevant, or at least should be. However, one can only assume that such a mention is designed to elicit some sort of visceral, politically correct revulsion at the fact (“not the kind of history political activists might suspect”).

Personally, I think it’s time to move beyond the closeted, anachronistic misandry. Frankly, it’s more than cliché at this point.

If Justice can wear a blindfold, perhaps the ABA Journal should too.

I recently discovered the free and easy-to-use technology of quick response codes (“Out of the Box,” June).

I am a technical writer, not a lawyer, but I found the article “Dirty Dozen,” June—about 12 ways to write a really bad brief—fascinating.

I have taught clear writing principles to numerous people from both business and government. Many of the points made in the piece are the same ones I teach. This makes sense, of course, since a legal brief is really just another form of technical writing.

What I find sort of funny is that, universally, the people I teach say that they understand all the points I make and try to write this way, but that their documents become full of meaningless jargon, poor construction and passive voice after they go through their legal departments. No doubt this is not true for everyone, but I’m afraid that lawyers do have a fairly bad rep in the technical writing community.

Scientists, professors and lawyers should all hire a technical writer to edit their work. It would improve the writing, and their readers—whether clients or judges—would love them for it.

I was pleased to see your article on the importance of obtaining disability insurance coverage in the event that an attorney becomes disabled (“Get a Plan B,” June). However, as a plaintiff-side ERISA litigator, I think readers should not be lulled into believing that an employer’s disability benefit plan will provide all of the benefits they might think.

Almost all employer-sponsored plans, including disability plans, are governed by the Employee Retirement Income Security Act of 1974, which means no allowance for compensatory, consequential or punitive damages stemming from an insurer’s wrongful denial of a disability benefit claim. Additionally, if the benefit premiums are paid for by the employer, then the benefits will be taxable; if paid for by the employee with after-tax dollars, the benefits are nontaxable. Readers should talk with their firm’s management committee about the option of employees paying the premiums themselves so as to ensure a greater benefit in the event of disability.

Regarding the June article “A Big Play for BigLaw”: As I understand it, the large multinational companies and the large law firms are asking that the rules of ethics and conflicts that work so well for the small firms should not apply to large companies and large firms. As I get it, this is the kind of class stratification that says not everyone has to play by the same rules.

Conflicts of interest are just that, whether in a small firm or a giant firm. A client who engages that firm is paying for the fact that there are certain resources available. Lawyers’ rates are often structured based on the availability of those resources. The client who pays big fees to a big firm expects to have the full weight and talent of that firm working assiduously for that client. If a “Chinese wall” is allowed just because a firm is large, clients will be disadvantaged.

Let’s all play by the same rules. I see no reason for my competitors to gain an advantage simply because they are large. There are plenty of lawyers to go around when a conflict arises, and frankly, businesses and individuals should probably consider the likelihood of a conflict when they select counsel to begin with. I do not care whether large multinational companies and their lawyers don’t feel the current regulatory structure works for them. Regulations placed on smaller firms are no less sound when applied to larger firms. The concept of “I am big so I don’t have to follow the rules” just doesn’t wash.