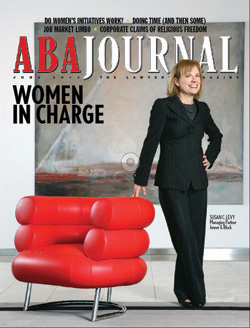 I am very proud of my former firm, Holland & Knight, for its Rising Stars program (“Do Women’s Initiatives Work?” June). But it is very simple to give women gender equity. Pay them and value what they do that brings equitable value to the firm. Pay is equity.

We can talk about initiatives, mentors, coaches, etc., and those things are so incredibly valuable. In fact, in my own career, nothing will ever prove as crucial as my mentors at Holland & Knight—outpaced and outdone always by the great Chesterfield Smith. But Holland & Knight also rewarded me with equity partnership, compensation and parity. Chesterfield taught me there was nothing I could not do. He divested me of the mere thought of it. But Holland & Knight gave me the field to run my plays. I am eternally grateful.

Efforts to promote women based more on their gender rather than their merit as lawyers simply worsens gender bias. At best, these and other “diversity” programs imply that the profession is a bastion for white males who can’t be counted on to let anyone else into the castle. While that is true in some corners of law, it’s not helpful to suggest they should open doors out of a need to make a quota or give an appearance of fairness. Nor is it useful to characterize women (and other “minority” groups) as needing doors opened for them because of their gender—that just institutionalizes the view that they need special help to succeed.

Law firms in particular have pretty simple formulae for success—get clients who pay, do great work, bill a lot of hours. Yes, women can still have a more difficult time getting opportunities to succeed. As a BigLaw partner, I am sometimes excluded from networking opportunities because male partners think to include other guys they know first. But if I make sure I’m on their radar screen, that usually goes away. It’s a rare partner who’ll turn down the opportunity to cross-sell because they’d be putting a woman in front of clients.

That wasn’t always true: I was once told point-blank by a managing partner that his firm would never allow a woman to become a partner. But I doubt his attitude or my career chances would’ve improved if he’d been forced to promote me notwithstanding the firm’s embrace of misogyny.

Instead, I moved on— something we all may have to do from time to time when a job isn’t a good fit, no matter the reason.

I had the privilege of working at Holland & Knight when the Rising Stars program was instituted and to this day I am friends with a couple of participants who have become equity partners in the firm. Although I didn’t get to participate in the program, I believe it made a huge difference in the lives of those selected.

Unfortunately, women have lacked mentorship and guidance in how to succeed in large law firms, and that is why so many young women leave the practice. I have made it a point to become a mentor to younger lawyers. I tell them that my secret for success is to be balanced.

Interesting how there wasn’t a single woman in charge of a public service organization interviewed for “Women in Charge,” June. Those, in my opinion, are the real heroes. They work tirelessly to keep organizations afloat that serve literally hundreds of low-income folks. They have to deal with constant attacks from the right and funding cuts. The women who run these organizations lead lawyers who are saving lives every day without money or thanks. Shame on you, ABA Journal, for not noticing and putting these women front and center.

Regarding “Is There a Kinder, Gentler, Cheaper Way to Divorce?” June: $6,500 for a divorce? I guess Michelle Crosby is only catering to the rich. And only a techie would charge astronomical rates for something you can already get for free. Clearly she’s never heard of family court. And most states now have their forms online—California has all its forms online, with full explanations in both English and Spanish.

$6,500 would buy an enormous amount of time from licensed family therapists and/or psychologists to work through the terms of an agreement the lawyers could then ink. Or the couple could spend half the money taking a nice vacation alone together; maybe they’d get back together.