Matchmaking website connects plaintiffs to litigation funding, but is that ethical? 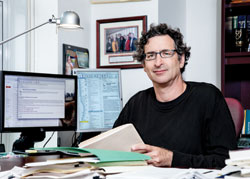 Law professor Anthony Sebok: If a lawyer provides privileged information to a third party, “the lawyer has now put at risk the client’s interests.” Photo by Len Irish.

Now a company called Legal Funding Central wants to add a chapter to the tale. It has launched its website to streamline the process of finding a litigation funder, not unlike what Lending Tree does for mortgages.

But there are critics of litigation funding who question the value of such a service.

Dylan Beynon, co-founder of Legal Funding Central, says the site is designed to “eliminate inefficiencies” in the matching process.

“We can bring through technology more competition and transparency,” he says, “creating more of a marketplace. There’s a ton of opportunity in the space.”

The website states that the idea came after “we witnessed the incredible amount of moving pieces legal funding companies deal with: taking calls and requests from plaintiffs 24/7, chasing down documents, sending agreements back and forth, wiring funds and tracking cases, to name a few. We kept hearing how much they wished the process could be faster, streamlined and more organized.”

Plaintiffs or their attorneys provide information about themselves and documents related to their cases, which are stored in a password-protected server. Most cases on the site, launched Feb. 19, have been personal injury-related because “that’s most of the attorneys we have relationships with,” Beynon says. But others have ranged from commercial litigation to divorce.

For the time being, the site will remain free for plaintiffs and their attorneys, he says. Legal Funding Central isn’t sure yet whether the site will make money through selling leads and commercial data, providing editorial-based information or licensing out its software platform.

The ABA’s Ethics 20/20 Commission issued a 2011 report (PDF) about ethical concerns raised by third parties being a party to litigation. Anthony Sebok, a professor at Cardozo School of Law at Yeshiva University and co-author of the white paper, says the website doesn’t raise new ethical concerns, but it does magnify those that he and W. Bradley Wendel, a Cornell Law School professor, raised three years ago.

The first concern raised in the report is that by involving a third party and providing that party with information about the case, attorney-client privilege could be compromised. “If the lawyer is providing privileged information,” Sebok says, “the lawyer has now put at risk the client’s interests.”

The second question is whether the lawyer is assuming new professional obligations to advise the client about the wisdom of litigation financing. Sebok says that’s not a new risk, but it is potentially a “new volume of risk.” However, early indications have been that courts do not see this as an obligation to advise clients of the prudence of such an action, Sebok says.

The Institute for Legal Reform at the U.S. Chamber of Commerce is concerned about whether plaintiffs end up getting a fair deal through litigation finance, says Bryan Quigley, senior vice president. The institute believes legal finance “takes our courts and turns them not into a place to find justice but [into] opportunities for third parties to make lots of money.”

Beynon says he’s well aware of the ethical concerns and takes them seriously. “Legal funding, at least when it’s done correctly, is definitely on the side of justice,” he says. “One of our goals is to increase transparency and access to information that’s necessary if you’re going to have an industry that’s run ethically.”

This article originally appeared in the September 2014 issue of the ABA Journal with this headline: “Finding Funders: Website connects plaintiffs to cash, but is that ethical?”