Matt Simpson competed in goalball at his second Paralympics in Tokyo 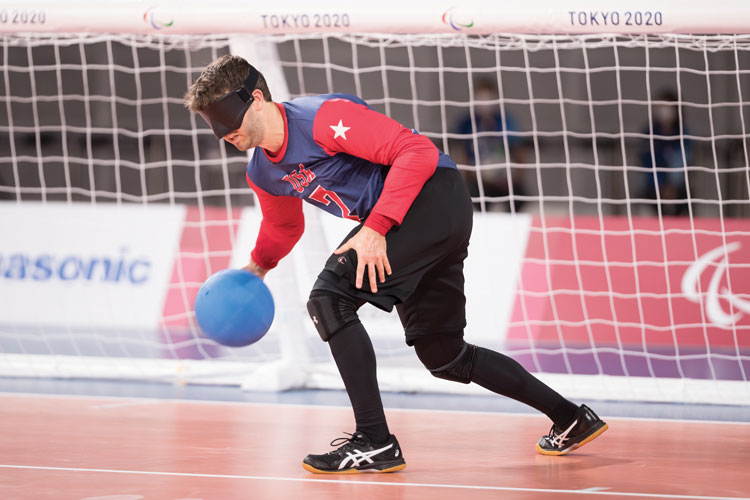 It’s hard not to be impressed when you listen to Matt Simpson describe goalball.

In the sport, two teams of three players who are visually impaired face off against each other on a floor about the size of a volleyball court. They all wear eyeshades, position themselves with the help of string lines and score by throwing a 3-pound basketball-size ball that has bells inside it across their opponent’s goal line.

Simpson says that the ball must touch the ground, but when it is rolled or released through a special spin throw, it can reach speeds of up to 50 mph.

“The team on the other end, instead of getting out of the way of the ball, is getting in front of the ball and using their body to defend a 30-foot-wide goal,” says Simpson, an associate in Sidley Austin’s Washington, D.C., office. “So imagine everyone is a soccer goalie, except you’re using your body because the ball is moving extremely fast, and everyone is blindfolded so there is no visual advantage.”

Simpson was 10 when he attended a sports camp hosted by the United States Association of Blind Athletes in North Carolina and discovered goalball, a sport developed in 1946 to help rehabilitate World War II veterans.

He has since competed at the sport’s highest level, playing on the U.S. men’s national team that won the silver medal at the 2016 Paralympics in Rio de Janeiro and representing the United States again at the delayed 2020 Games in Tokyo last summer.

“In so many other areas of life, I was limited by my visual impairment, and it had a lot to do with how successful I could be,” says Simpson, who has minimal light perception and uses a white cane and a guide dog. “Even in school, where I found success, I always had to do things differently, and I always had to overcome challenges.

“But when I found goalball, where my blindness had nothing to do with how successful I could be, that was really cool for me.” 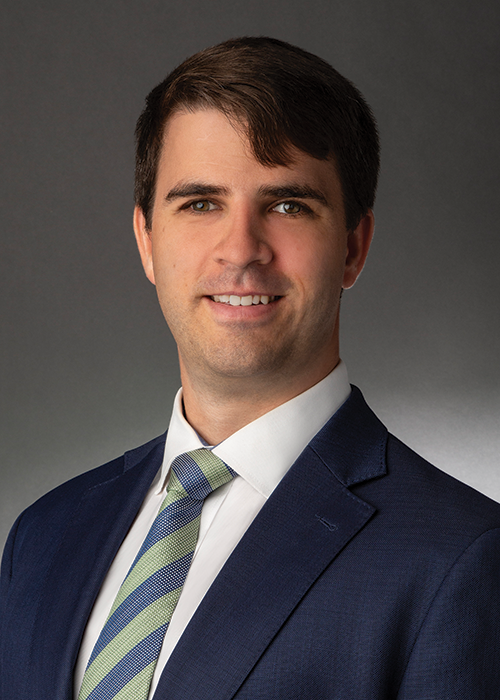 The support of Matt Simpson’s firm, Sidley Austin, played a big part in his decision to return to compete in the 2021 Paralympics. (Photo provided by Matt Simpson.)

Simpson was born with Leber congenital amaurosis, a degenerative eye disorder that primarily affects the retina and causes severe visual impairment at an early age.

Growing up in an Atlanta suburb, he had enough vision to swim and run track but dreamed of competing in team sports. After he came home from the USABA camp and told his parents about goalball, it quickly became a family affair. His dad helped start a team and became its coach, and his mom traveled with them to competitions.

He remembers playing in his first tournament when he was 12 and weighed only about 55 pounds. He was small for his age, and at the time, he felt lucky when older opponents didn’t push him into the goal when they hit him with the ball.

Simpson spent several years improving his skills and began working with a strength and conditioning coach as a freshman at Washington and Lee University in 2008. He made the U.S. under-19 goalball team, and the next year, he helped the team win gold at the world youth championships.

Simpson graduated with a bachelor’s degree in international politics in 2012 and became the membership and outreach coordinator for USABA in Colorado Springs, Colorado. He met his teammates at training camps at the U.S. Olympic & Paralympic Training Center there and in Lake Placid, New York.

The U.S. men’s goalball team won the bronze medal at the world championships in 2014, and the next year, USABA established a goalball residential training program in Fort Wayne, Indiana. Simpson lived there in the year before the 2016 Paralympics, but after his team won silver in Rio, he thought it was time to move on.

He enrolled in the University of Virginia School of Law in 2017. He had planned to play goalball locally to stay sane but found himself returning to the national team. He began attending training camps again and helped his team qualify for the 2020 Paralympics.

“But then COVID happened, and I thought, ‘Oh, it was cool to think about Tokyo while I could,’” says Simpson, who joined the ABA in law school. “In 2020, I was definitely taking the bar. I was going to be starting my job at Sidley, and my wife was pregnant. I thought there was probably no way I could do Tokyo in 2021.”

Fortunately, Simpson says, his firm and his wife, Tricia, supported his decision to compete in the Paralympics. His team placed fourth after losing its captain to injury in the first game. Lithuania, which won the gold medal in 2016, beat the U.S. again to win the bronze.

“Getting to go was really unexpected and almost as good as any other experience, just because it felt like an opportunity that I didn’t think I would get,” Simpson says. “It was little bittersweet … we obviously didn’t give up. We made it to the bronze medal game, and it just didn’t go our way.”

Keith Young, the coach of the U.S. men’s goalball team, describes Simpson as an “explosive” player who can often bounce the ball over the heads of his opponents. He says Simpson is also known for his character, both on and off the court.

“He has a very high standard for himself, and that’s what I want for all my goalball players.”

While Simpson isn’t ruling out the 2024 Paris Paralympics, he says he loves practicing law and feels grateful for the opportunity to move into another fast-paced, intense activity. And when Simpson isn’t working or playing goalball, he is spending time with his wife and their 1-year-old daughter, Nellie. He has always been a voracious reader and enjoys skiing and being outside.

As a member of Sidley’s White Collar: Government Litigation and Investigations practice, Simpson has noticed the parallels between being on the court and in the courtroom. In both arenas, he needs the same commitment to training to be the best.

“Being on the court, it’s a game of milliseconds and millimeters, and you have to develop mental skills in order to be successful when you’re playing other professionals who dedicate their lives to pursuing excellence at the game,” he says. “That is certainly very translatable to the practice of law.”

Gordon Todd, a partner in Sidley Austin’s Washington, D.C., office, interviewed Simpson when he was in law school and now works closely with him on litigation. He agrees that Simpson’s experience with goalball will help him grow as a lawyer.

“It certainly is a testament to his drive,” Todd says. “This is a guy who is going to succeed and overcome and achieve superlative things no matter what life has thrown at him.”

This story was originally published in the February-March 2022 issue of the ABA Journal under the headline: “Spirit in Motion: Matt Simpson competed in goalball at his second Paralympics in Tokyo.”