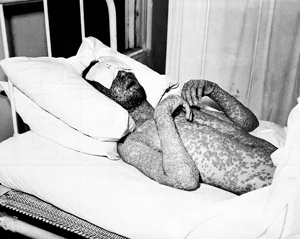 For nearly 3,000 years, variola major—a disease known as smallpox—plagued the planet. From Europe to Africa and Asia, the disease killed as many as 30 percent of those infected. There was no known cure. Even the powerful, once infected, were not immune to an agonizing death. Queen Mary II of England, Emperor Joseph I of Austria, Czar Peter II of Russia and King Louis XV of France—all died of the disease; and in nearly every country deep, distinctive facial scars identified its survivors.


From its earliest days as a colony, Massachusetts had attempted to develop a defense against outbreaks of smallpox. Two early leaders, the Puritan minister Cotton Mather and Dr. Zabdiel Boylston, had been proponents of variolation—a crude inoculation that planted a live virus drained from the pustules of smallpox victims under the skin. In 1798, the English scientist Edward Jenner showed that the introduction of cowpox to the human immune system could dramatically curtail smallpox. But resistance to immunization continued.

In 1902, the Board of Health for the city of Cambridge, responding to an outbreak of smallpox, adopted a regulation requiring that all residents over the age of 21 be vaccinated—or revaccinated, if a prior vaccination had taken place before March 1897. Anyone refusing to do so faced criminal charges.

But Henning Jacobson, a Lutheran minister, had been vaccinated for smallpox as a child in Sweden; and his memory of unpleasant aftereffects compelled him to challenge the law. When he refused to be revaccinated, he was hauled into a state court where he offered a variety of arguments: That the science of vaccination was controversial, that the regulation violated his constitutional liberties and—because it allowed exemptions for medically vulnerable children—that it violated equal protection for him as an adult. Having declined his offers of proof, the court found him guilty and imposed the maximum penalty, a $5 fine.

In deciding Jacobson v. Massachusetts, the U.S. Supreme Court was similarly unimpressed. Writing for a 7-2 majority in 1905, Justice John Marshall Harlan said the lower court was not obligated to introduce the sketchy contrarian views of Jacobson's "experts." Despite a few negative reactions, the public health advantages of compulsory vaccination were supported by staggering statistical evidence. And while some individual rights should be honored against the majority, Harlan concluded, ignoring the well-being of the public was not one of them. "It was the duty of the constituted authorities primarily to keep in view the welfare, comfort and safety of the many, and not permit the interests of the many to be subordinated to the wishes or convenience of the few."

The scourge of smallpox continued, and in 1967 the World Health Organization launched an international offensive against the disease. Aided by local compulsory immunization laws, WHO contained the disease so thoroughly that its last natural occurrence was reported in 1977. Three years later, on May 8, 1980, WHO announced that for the first time in recorded history there were no recorded cases of smallpox. Variola major had been eradicated.