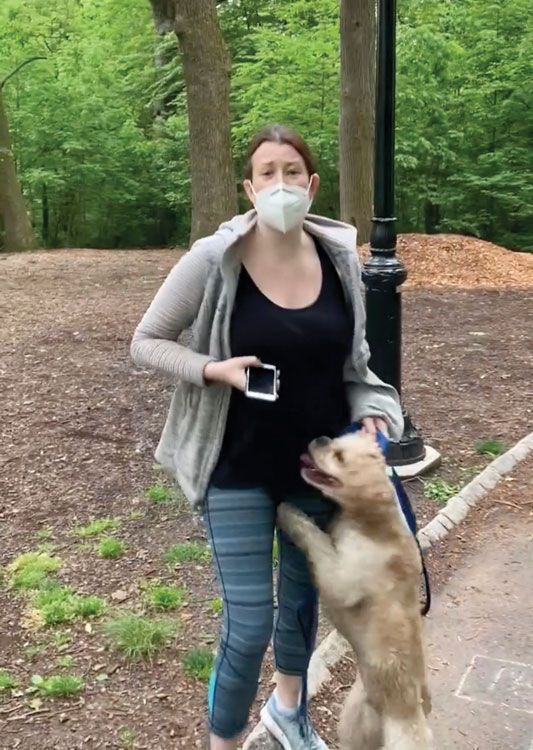 Amy Cooper’s call to 911 falsely accusing Christian Cooper, a Black man, of threatening her after he asked her to leash her dog prompted legislation on discriminatory calls. Photo by Christian Cooper via AP.

Rep. Janelle Bynum, a Black member of the Oregon House of Representatives, was inspired to sponsor a bill against racial profiling in 911 calls after someone called the police on her as she went door-to-door in a Portland suburb to speak to constituents in an effort to keep her seat in the state house.

It was the July Fourth weekend in 2018. Bynum was dressed in a white shirt, camo pants and a pair of Eileen Fisher sandals while she canvassed. Since she had 30 people on her list, she traveled light: red lipstick, cellphone, ID and keys.

The Democratic politician said hello to a 3-year-old boy on the street. Out of the corner of her eye, she thought she saw the boy’s mother. Bynum moved on.

The woman, Jasmine Piazzisi, made a nonemergency call and reported her.

Bynum was using her phone to take notes about her constituents when a Clackamas County sheriff’s deputy pulled up.

“I laughed. Not because it was funny, but because my number had been called,” Bynum says. “It was something I’d prepared for since the first day I’d started canvassing.”

After Bynum explained to the deputy that she was canvassing, she asked the officer if she could talk to Piazzisi.

“You could have gotten me killed,” Bynum says she told her. “All you had to do was stop me and ask me what I was doing.”

The incident prompted her to co-sponsor a bill to deter biased 911 calls, allowing civil claims for up to $250 in damages.

Gov. Kate Brown signed the bill into law in 2019, almost a year before Amy Cooper, a white woman, called 911 on birdwatcher Christian Cooper after he asked her to put a leash on her dog in Central Park. She falsely claimed Cooper, a Black man, was threatening her. Since then, a flurry of new laws allow civil or criminal remedies for discriminatory calls, casting light on the gatekeeper role of the 911 system and false reports that could turn deadly.

In 2018, an employee called 911 on two Black men meeting in a downtown Philadelphia Starbucks.

In June, a white woman reported a Filipino man stenciling “Black Lives Matter” on the exterior of his own San Francisco home. Police have been called on Black people for operating a lemonade stand, napping in a dorm common room, barbecuing in a park, shopping while pregnant and mowing the wrong lawn.

For many, 911 bias laws are overdue. Gloria Browne-Marshall, a professor of constitutional law at the John Jay College of Criminal Justice in New York City, says false reporting of Black people committing crimes is as old as Jim Crow laws.

“It takes George Floyd’s death and an Amy Cooper in Central Park being videotaped before it rises to the consciousness of many people in this country,” Browne-Marshall says.

About 240 million 911 calls are placed each year. But there is no national database of 911 calls, according to Pew Stateline, a news source on trends in state policy.

“It sends the message that the police are not there to help you act out your white supremacist fantasy and take revenge against some Black person who has violated your white space,” Butler says.

Bynum’s bill faced opposition from Republican Sen. Alan Olsen. He cast the only vote against the bill in the Oregon Senate, arguing the law would deter people from reporting crime and would make “our communities less safe.”

Mitchell Davis, executive board member of the Chicago chapter of the National Organization of Black Law Enforcement Executives and chief of the Hazel Crest Police Department in Illinois, isn’t opposed to the new laws but says existing false reporting laws might make them unnecessary.

“If we’re going to spend the time and effort on legislation, let’s look at legislation that’s going to bring about meaningful change,” Davis says.

Civil rights attorney Thomas Seabaugh represented the mother of Kendrec McDade, a 19-year-old Black man who Pasadena, California, police shot and killed after a man falsely reported he had been robbed at gunpoint. California’s new 911 law is “cosmetic,” Seabaugh says.

“One of the defenses the police had was to attempt to shift blame on to the person who had called 911,” Seabaugh says. “We argued that regardless of the information they had, the police had killed a young man who was running away unarmed.”

When a call leads to tragedy

In 2014, John Crawford III, a 22-year-old Black man, took an unpackaged air rifle off a shelf in a Walmart in Beavercreek, Ohio. Ronald Ritchie, a white man, saw Crawford in the pet section and dialed 911. He told the dispatcher Crawford was loading the rifle and was pointing it at two children.

Two police officers entered the Walmart, and one of them shot and killed Crawford. Surveillance video synced to a recording of Ritchie’s call seemed to reveal Crawford did not brandish the toy gun or point it at anyone.

An Ohio judge found probable cause to charge Ritchie with making a false alarm. A special prosecutor decided not to press charges, arguing Ritchie did not knowingly give false information.

Bomani Moyenda and other activists filed affidavits supporting criminal charges against Ritchie. While he welcomes the recent legislation, Moyenda says the laws could go further. Someone making a racially biased 911 call should face charges ranging “up to attempted murder,” he says.

Proving bias in 911 cases can be difficult. Piazzisi said she called the police on Bynum because her behavior seemed strange, and race was never a factor.

Establishing intent is not unique to false reports. New Jersey Attorney General Gurbir Grewal says the challenge for prosecutors will be getting “into the head of the defendant” and making clear the calls are racially motivated.

The focus of criminal justice reform is often on police, prosecutors and judges. But 911 dispatchers are gatekeepers of the justice system. If a dispatcher relays false or missing information, the result can be deadly.

Bynum says the “default question” the dispatcher asked Piazzisi was if the person was a white female. There is “so much bias wrapped up in that [question], because that’s the safest thing to ask,” Bynum says, adding that the dispatcher was “trying to get at” her race.

“Policies and procedures can help save the lives of a lot of people, and if police departments and 911 call centers would do that internal work, legislation wouldn’t be necessary,” Bynum says.

Grewal agrees that dispatchers, prosecutors and police officers do their work against a backdrop of implicit bias.

“Training 911 dispatchers and others on these issues is important because that’s part of the danger with these race-based false alarm calls,” Grewal says.

Jessica Gillooly, a research fellow at the Policing Project at New York University School of Law, has studied the impact of 911 dispatchers on policing and worked as a 911 call-taker. Typically, police officers go through implicit bias training, but it’s less common in 911 centers, Gillooly says.

“There’s not a lot of focus in the training on the social harms that could come from sending the police,” Gillooly adds. “I think training call-takers to push back and challenge callers a bit more when they have concern over the callers’ rationale is important, and then passing that information on if the police are going to respond so they show up with the best information they have.”

Bynum’s recollections of the day Piazzisi called the police on her are still vivid.

“On the surface, nothing really bad happened, but it was humiliating. It has taken me quite some time to get over the fact I could do everything right and still be suspicious,” Bynum says.

This story was originally published in the Feb/March 2021 issue of the ABA Journal under the headline: “Call to Action: New laws aim to quash racial profiling in 911 calls”