New '.law' suffix could set off a domain gold rush 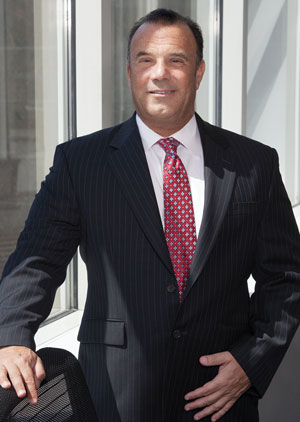 Legal marketing could see the largest upheaval since the beginning of the dot-com era with the arrival of the new “.law” domain extension.

On July 30, early adopters such as Skadden, Arps, Slate, Meagher & Flom; DLA Piper; and Goldstein & Russell snapped up their .law domains on the first day of sales, but the sale was restricted to those who had registered their trademarks with the Internet Corporation for Assigned Names and Numbers.

The market opens for real on Oct. 12, when sales are allowed to the entire legal community.

“It’s incredible,” says John Morgan, chairman of the new domain. “It gives everybody the opportunity to have a one-time reset for the domain name of their dreams, and it will probably never happen again when you have a domain like this in a field like ours.”

Lou Andreozzi, CEO of the domain and former chairman of Bloomberg Law and former CEO of LexisNexis North American Legal Markets, estimates the U.S. market is about 1.2 million attorneys, while the worldwide market approaches 2 million lawyers. Andreozzi says his goal for .law in the next 12 to 24 months is to reach 10 percent market penetration, or around 100,000 sales.

At roughly $200 per year (plus a $10 verification fee), the domain is looking at an annual market north of $200 million, and potentially exponentially more when offensive and defensive purchases are figured in.

“Some people will buy them offensively such as, for example, MiamiDivorce.law, while those with distinguished brands will buy them defensively so someone else doesn’t get the name,” Andreozzi explains.

Morgan says lawyers are more tech-savvy now than they were during the dawn of the Internet.

“I didn’t know what a BlackBerry was,” Morgan recalls. “I went to a Yankees game with some friends and they were typing away furiously, and I was like: What is that? So when the dot-com names were being sorted out, lawyers were the last to know.”

Many nonlawyers got involved in the dot-com name game gold rush, which led to some concerns about who the public was actually reaching when typing in a domain name. But .law sales will be restricted to “credentialed lawyers.” Enterprises other than law firms (law libraries, bar associations, etc.) may obtain .law domains, but they too must be purchased by a credentialed lawyer.

For the purpose of obtaining a unique personal domain, “I’ve got a messed-up name,” Morgan says. One challenge he’s had with his too-common name is to come up with a unique identity on the Web. “So this is as if all the license plates are back on the market and you can get whatever plate you want.”

Minds plus Machines, the company with the exclusive license to offer .law extensions, has formed a partnership with ALM Media to collaborate on advertising and marketing for the new domain.

Though Morgan says the $200 fee amounted to “a round of drinks,” practitioners who want to nail down the most likely permutations of their brand will probably need to purchase more than one domain name. Renewal fees for premium domain names and “super-premium names” have not yet been determined.

Tim Corcoran, a past president of the Legal Marketing Association, says marketing directors should plan their .law strategies now.

“It’s obviously a good idea to capture your preferred top-level domain and to use other names for marketing purposes such as ‘construction lawyers,’ ” Corcoran says. “You’ll need to construct a top-level domain and act quickly on it, so there’s a lot of prep work to do in advance.”

A firm’s search engine strategy should also be taken into account when choosing a domain name, Corcoran adds. More information on the .law launch program is available on the Web at nic.law.

This article originally appeared in the October 2015 issue of the ABA Journal with this headline: “In the Name of …: New ‘.law’ suffix could set off a domain gold rush.”