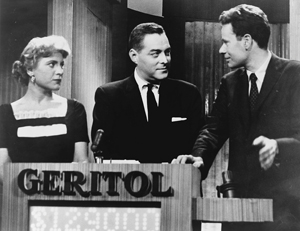 In 1954, the Supreme Court settled a dispute between the Federal Communications Commission and television's broadcast giants. The FCC had ruled that television quiz and game shows (like Stop The Music, Sing It Again and What's My Name?) were a form of gambling and threatened the license of any television station that programmed them. The Warren court disagreed, saying the FCC had overstepped its authority. Soon after, upscale quiz shows like The $64,000 Question, Dotto and Tic-Tac Dough were dominating prime-time television.

In 1956, Jack Barry and Dan Enright introduced Twenty-One, an elaborately staged show that challenged contestants to answer questions of genuine difficulty inside seemingly sophisticated soundproof booths. But the first contestants proved inadequate to the questions, and under pressure from sponsors to make the show more interesting, Enright decided to scrap competition for choreography.

Herb Stempel, a 29-year-old ex-GI attending the City College of New York, wrote to Enright asking to become a contestant. Stempel claimed an IQ of 170 and scored high on a list of test questions. But Enright, taking no chances, began to coach Stempel—not only on the questions but on how to feign anxiety and indecision in an effort to build suspense. As the middlebrow Stempel dispatched challenger after challenger, interest in the show grew quickly. And by November 1956, Stempel was a budding—if boring—star.

Enright began looking for a more glamorous champion and found one in Charles Van Doren, the dapper and brilliant scion of a literary family. Pitted against the incumbent Stempel, their faceoff ended in record ratings and a win for Van Doren. By February 1957, Van Doren was on the cover of Time magazine, eventually riding his celebrity to a regular television spot on the Today show. While Van Doren was still on the show, Stempel pleaded for a return match. Enright turned him down, hinting that a weary Van Doren might soon be leaving. Stempel decided to book a $5,000 bet that Van Doren would lose to lawyer Vivienne Nearing on March 11, 1957. Stempel won, doubling his money.

But rumors of fixing swirled around quiz shows like Twenty-One and The $64,000 Question. And after a contestant's incriminating notebook was discovered on the set of Dotto in 1958, a grand jury investigation was opened in New York. Though no one was indicted, a series of congressional hearings—including testimony from Stempel that he received only a fraction of his publicized winnings—eliminated any doubt that the scripting of TV quiz shows had become routine. It would be more than a decade before they returned to prime time.