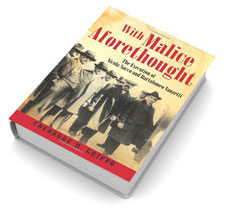 After more than 50 years in the law, Chicago lawyer Ted Grippo has returned to his childhood fascination with the 1920s-era double-murder trial of Nicola Sacco and Bartolomeo Vanzetti. And in his new book on the pair, Grippo claims to have revealed fresh evidence showing the two were framed.

Grippo spent several years analyzing the six-volume, 6,000-page record of the case, which he read as part of his seven years of research in writing With Malice Aforethought: The Execution of Nicola Sacco and Bartolomeo Vanzetti. In the process, he says, he found several pieces of evidence that cast doubt on the verdict.

Among them: an affidavit filed three years after the case by the ballistics expert, who said he believed the fatal shots had been fired from a Colt .32, but not necessarily from Sacco’s own gun; references in the judge’s handwriting that mention wanting to find out who had switched the barrel of Sacco’s gun; a bullet entered into the case about which “there’s lot of compelling evidence that it was a counterfeit”; and a hearsay statement from an officer on the case to the Boston Globe in 1937 that Sacco’s gun had been switched with the one truly suspected in the case.

“I contend that the conspirators that tried to frame Sacco had to switch Sacco’s genuine gun for the gun that produced the counterfeit bullet,” Grippo says. “I came to the conclusion that this whole business of switching of the barrel of Sacco’s gun was a ruse to cover up—the whole purpose [of which] was to switch Sacco’s gun with another gun that killed the guard.”

Known anarchists during the Red Scare that followed the Russian Revolution and Italian immigrants during an era of rampant xenophobia, Sacco and Vanzetti were convenient scapegoats on whom to pin the double murder, Grippo believes. He situates the case against the backdrop of post-World War I urban America and provides background details on the two defendants before turning to the guts of the book, about the case itself.

Grippo’s interest in the case dates to an early memory, as a 10-year-old who heard a radio broadcast about Sacco and Vanzetti in connection with the 10th anniversary of their 1927 executions. He questioned his father, an Italian immigrant who had joined the U.S. Army and gained citizenship, and remembers both his father’s words and countenance when answering.

“He told me that they were executed for committing a murder, but that many people believed they were innocent,” Grippo recalls. “He had a very sad look and a worried look on his face. I didn’t understand why at the time. He was worried about the negative impact [the case] would have on the country.”

Grippo sees parallels between the anti-immigration sentiments and fears of terrorism in the 1920s and contemporary times, as well as the need to root out miscarriages of justice. He is a board member for the Center on Wrongful Convictions at Northwestern University’s law school.

“Some people have labeled the Sacco and Vanzetti case the mother of all wrongful convictions,” Grippo says.

“Prosecuting attorneys are not supposed to seek convictions at any cost; they’re supposed to seek justice at all costs. … There is a definite connection. It’s the reason this case has had an enduring quality.”