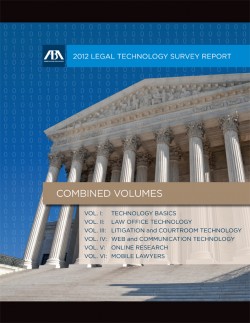 The 2012 Legal Technology Survey Report: Digital copies of the report may be purchased by individual volume or in toto through the ABA Web Store. Graphics by Jamie Gannon.

The ABA’s 2012 Legal Technology Survey Report documents some good news from survey respondents who use Web 2.0 services in their practices—double-digit percentages reported they had clients who retained them directly or via referral as a result of the lawyers’ use of online services.

Results from the last three years of survey reports show (in the main) continued growth in the number of positive responses to questions about gaining clients through the use of blogs; social networks including Avvo, Facebook, LawLink, Legal OnRamp, LinkedIn, Martindale-Hubbell Connected and Plaxo; and microblogs like Twitter.

Of the 823 respondents to the Web and Communication Technology portion of the 2012 survey, social networks drew the most participation, with 552 respondents. Only 69 respondents reported on client retention through their blogs, and 82 reported on microblogging.

Among the many other details in the six-volume study, 50 percent of respondents who blog reported spending less than one hour a week maintaining their legal- topic blogs, while 44.3 percent said they spent 1-5 hours and 5.7 percent spent 6-10 hours a week. The survey, covering law firms’ use of technology from office to courtroom to mobile devices, has been conducted by the ABA’s Legal Technology Research Center since 1990. 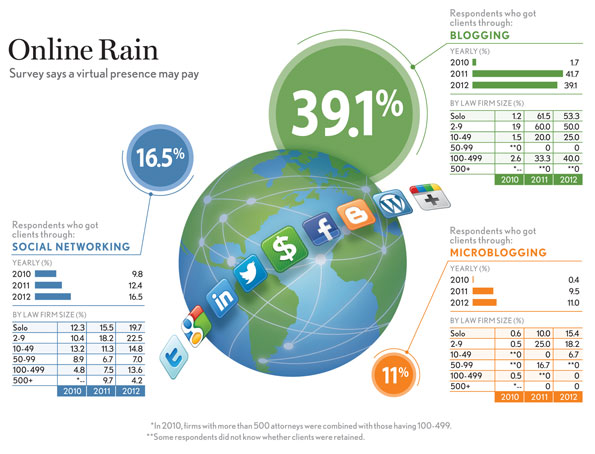