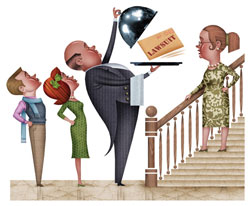 Family dynamics can get complicated, with generations looking disparagingly upon one another—parents wondering why kids have to be so obstinate and kids wondering how parents got so clueless.

But most families manage to co-exist, or at least fake it well enough, to create memories they’ll look back on fondly. Sometimes, however, the memories can be downright traumatic, like when a mom makes her son wear a seat belt or sets a curfew for her daughter on homecoming night.

That whiff of sarcasm in the air is attributable to the fact that the two aforementioned atrocities actually served as part of the basis of a lawsuit brought by two upper-crust siblings who decided that their upbringing had been rendered intolerable by the less-than-sterling parenting skills of their mother.

Steven Miner II, 23, and his sister Kathryn, 20—with the assistance of their attorney father, Steven A. Miner —sued Kimberly Garrity in 2009 for intentional as well as negligent infliction of emotional distress.

It seems that growing up in Barrington Hills, Ill.— an “equestrian community” where most homes are worth more than $600,000 and sit on at least 5 acres—was not the utopia they might have expected.

Miner and Garrity were divorced in 1995, with Miner gaining full custody of Steven and joint custody of Kathryn. And if the two offenses already mentioned are not enough to bring out the tar and feathers, the lawsuit also alleges that:

• Garrity agreed to pay half the kids’ medical expenses that were not covered by insurance, but insisted upon seeing receipts.

• When Garrity would send the kids cards on special occasions, she would often fail “to include any type of gift in the card.”

• While Steven was at college, Garrity did not send him any care packages until his sixth semester.

The complaint also claims psychological abuse in the forms of mind games and favoritism, and it alleges that Garrity once “smacked” Steven for something he said.

OK, so Garrity is not an angel. Who is? Many of us had parents whose “methods” would, in this day and age, engender multiple visits from the Department of Children and Family Services. Not to mention the fact that we didn’t grow up in a veritable country club.

So why didn’t we sue our parents? First and foremost is that in a less litigious era, a lawsuit wasn’t our Plan A. And besides, what was there to gain? Awkward holidays? Permanent schisms in the family unit?

The Appellate Court of Illinois, First Judicial District, didn’t see that there was much to gain, either, in the Miners’ case. It was dismissed in August because to rule in favor could, as the court put it, “potentially open the floodgates to subject family child rearing to … excessive judicial scrutiny and interference.”

Sorry, kids, if Mom’s parenting style wasn’t as indulgent as you might have liked. But as for that sense of entitlement you seem to have, maybe you need to train your sights on dear old Dad.