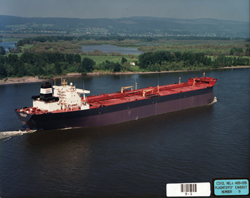 The phone call is barely intelligible, but careful listening reveals the voice of Capt. Joseph Hazelwood signaling the U.S. Coast Guard that his ship, the Exxon Val­dez, had run aground.

“Yeah, ah, Valdez back, ah, we’ve, should be on your radar there, we’ve fetched up, ah, hard aground, north of Goose Island, off Bligh Reef, and, ah, evidently leaking some oil, and we’re gonna be here for a while and, ah, if you want, ah, so you’re notified, over,” Hazelwood says.

The call was placed about 20 minutes after the Exxon Valdez crashed in Prince William Sound, dumping more than 10 million gallons of oil in the Alaskan waters. The 1989 oil spill was the worst in U.S. history.

Representing the plaintiffs, Fisher submitted a DVD of trial exhibits, including the recording of Hazelwood’s call. One of the contested issues was whether Hazel­wood was drunk the night of the crash. Hazelwood, who had a history of alcoholism, was convicted of misdemeanor negligence, but acquitted of charges that he was drunk at the time of the accident. 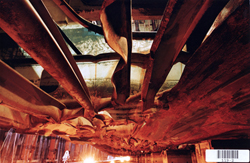 Fisher, a Stanford University law professor who helps run the school’s Supreme Court litigation program, hoped the DVD would serve to remind the justices just how “socially reprehensible” the circumstances of the accident were. Along with the audiotape are dozens of photos showing Prince William Sound and the wreckage of the Exxon Valdez.

The court didn’t comment on the DVD when it issued its decision in late June, overturning punitive damages of $2.6 billion awarded to the plaintiffs—33,000 fishermen and others whose business suffered because of the spill. The court split, however, over whether Exxon was liable for Hazelwood’s actions, upholding a ruling by the San Francisco-based 9th U.S. Circuit Court of Ap­peals that the company could be held liable.

But lawyers say the trend of submitting DVD evidence to the high court is only going to grow. “Given the march of technology, there are likely to be more cases that have audiovisual exhibits,” Fisher says.

The value of submitting photos and tapes, fisher says, is that they pack a far more powerful punch than a written transcript. “It makes things sink in.”

But some observers wonder whether the nascent prac­tice of submitting videos even belongs at the Supreme Court. Such evidence is appropriate at trial, especially before a jury, but not at the appellate level, they say.

Indeed, says one expert, the practice seems to feed into the Supreme Court’s increasing preference to take over the jury function. “You certainly get the feeling over the past five years that the court has been influenced by the idea that juries are unpredictable and often erratic,” says David Hoffman, a professor at Temple University’s Beasley School of Law.

In fact, says Hoffman, much of Justice David H. Souter’s majority opinion in Exxon consisted of a sta­tistics-based critique of the jury’s role in assessing pu­nitive damages. “They appear to be advancing a set of con­stitutional rules to remove a jury’s power,” he adds.

Probably the high point of the court’s use of video evidence came with the 2007 decision Scott v. Harris. There, the court relied on a videotape showing a high-speed police chase (video) to dismiss a civil rights case filed by the driver, Victor Harris. A police officer ended the chase by ramming his car into Harris’, but the collision left the 19-year-old driver a paraplegic.

In the majority opinion, Justice Antonin Scalia wrote that the videotape “tells quite a different story” than the lower court did in its written decision. “There we see respondent’s vehicle racing down narrow, two-lane roads in the dead of night at speeds that are shockingly fast,” Scalia wrote in the 8-1 decision. “Far from being the cautious and controlled driver the lower court depicts, what we see on the video more closely resembles a Hollywood-style car chase of the most frightening sort, placing police officers and innocent bystanders alike at great risk of serious injury.”

But Justice John Paul Stevens, the lone dissenter, had a different interpretation of the video. “The tape actually confirms, rather than contradicts, the lower courts’ appraisal of the factual questions at issue,” he wrote in his dissent, in which he referred to the other judges as “my colleagues on the jury.”

“More important,” Stevens continued, “it surely does not provide a principled basis for depriving the respondent of his right to have a jury evaluate the question whether the police officers’ decision to use deadly force to bring the chase to an end was reasonable.”

Hoffman and two other law professors back Stevens’ view. In a paper slated for January publication in the Harvard Law Review, they challenge whether videotapes are as solid as the majority in Scott suggests.

“Videos only show you something from a particular reference point,” says lead author Dan Kahan, a professor at Yale Law School. “That can be very misleading.”

For their paper, “Whose eyes are you going to Believe? Scott v. Harris and the Perils of Cognitive Illiberalism,” the professors showed a videotape of the Scott chase to about 1,350 people drawn from a survey panel. The vast majority, 75 percent, agreed that deadly force was warranted, but that still left a sizable group that did not. And, in the most striking finding of the report, the divergent views correlated with participants’ demographic characteristics.

“Individuals (particularly white males) who hold hierarchical and individualist cultural worldviews, who are politically conservative, who are affluent and who reside in the West were likely to form significantly more pro-defendant risk perceptions,” the professors write. “In­dividuals who hold egalitarian and communitarian views, whose politics are liberal, who are well-educated but likely less affluent and whose ranks include disproportionately more African-Americans and women, in contrast, were significantly more likely to form pro-plaintiff views and to reject the conclusion that the police acted reasonably in using deadly force to terminate the chase.”

For Kahan, the variety of conclusions supports the idea that videos aren’t the smoking gun that some lawyers think. “People can see pictures and have different interpretations of them,” he says.

In fact, Scalia himself in an earlier case had a dif­ferent take on a video from that of his colleagues. In his 1994 opinion in Madsen v. Women’s Health Center, Scalia referred to a video of protesters at an abortion clinic to justify his dissent from a ruling upholding a mandatory 36-foot buffer zone between demonstrators and the clinic.

“What the videotape, the rest of the record and the trial court’s findings do not contain is any suggestion of violence near the clinic, nor do they establish any attempt to prevent entry or exit,” Scalia wrote.

Kahan says the mere fact that Scalia came to a dif­ferent conclusion than some of the other judges after viewing the tape supports the idea that video isn’t dispositive.

Hoffman adds that asking appellate judges to re-examine the underlying incidents by viewing DVD evidence—in effect undertaking “a de novo review, all the way up the chain”—potentially undermines the jury’s role as fact-finder. “It destabilizes the idea of deference,” he says.

But Philip Savrin, defense lawyer in Scott, argues that judges shouldn’t hesitate to use video evidence to determine what it’s reasonable for a jury to find. “If you have a camera and it shows someone going through a red light, there’s not a genuine issue of fact because no reasonable jury could say, ‘It was green.’ ”

For his part, Fisher says the DVD was designed to leap back in time and remind the court of the outrage that greeted the Exxon Valdez oil spill.

“One of the chief purposes in submitting it was the real concern that the extraordinary passage of time would cause the outrage to dissipate,” he says. In fact, adds Fisher, “my fears may well have been realized that Exxon benefited from the distance from the event.”