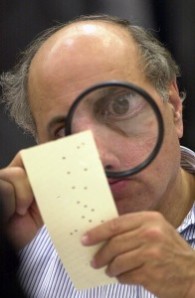 Click here for a gallery of Stevens' top cases.

Appointed by the moderate Republican President Gerald Ford—another Midwesterner and World War II vet—Stevens resolutely insists that his middle-of-the-road, practical legal values are as visible at his retirement this year as they were at his 1975 appointment.

“You see some of the ideas that he puts out throughout his career,” says Diane Marie Amann, a law professor at the University of California at Davis and a Stevens clerk in 1988-89. “He has a way of thinking through problems that, once he feels he has arrived at a certain way of thinking about facts, he has arrived at a solution: ‘I’m still saying what I said before. I still have that understanding.’ ”

Growing up in Chicago and the Midwest “gives him a very pragmatic view of law,” says University of Oklahoma law professor Joseph Thai, a 2000-01 Stevens clerk. “He’s not one of those East Coast academics who decide on generalities. He considers what happens on the ground.”

While Stevens relishes his consistency, the political ground has shifted so far to the right that Stevens has been regarded as the court’s reigning liberal. In fact, many have doubted that he’s a Republican. He is—but of mid-20th century America, the Eisenhower brand, when moderation rang.

That’s why Stevens frequently treats his former rulings as well-preserved heirlooms, unveiling them when he needs them for concordance.

Stevens “quotes his [appellate] views a lot and goes back and shows that he’s consistent,” says Thai. “When people make the characterization that he’s evolved, [it’s] the court, if not the country, [that] has moved to the right.”

As the court’s senior member, Stevens chose the majority opinion writer when conservative Chief Justices William H. Rehnquist or John G. Roberts Jr. were on the opposing side. His frequent choice was Justice Anthony M. Kennedy, another moderate Republican who has waved back and forth on cultural issues.

Kennedy, too, has taken his cue from Stevens’ highly regarded precedence. For example, in overturning Bowers v. Hardwick, the controversial 1986 case that upheld a Georgia law outlawing homosexual sodomy, Kennedy harked back directly to Stevens’ dissent:

“The rationale of Bowers does not withstand careful analysis,” wrote Kennedy in 2003’s Lawrence v. Texas. “In his dissenting opinion in Bowers, Justice Stevens came to these conclusions: … ‘First, the fact that the governing majority in a state has traditionally viewed a particular practice as immoral is not a sufficient reason for upholding a law prohibiting the practice. … Second, individual decisions by married persons, concerning the intimacies of their physical relationship, even when not intended to produce offspring, are a form of liberty protected by the due process clause of the 14th Amendment. … Moreover, this protection extends to intimate choices by unmarried, as well as married, persons.’

“Justice Stevens’ analysis, in our view, should have been controlling in Bowers and should control here.”

Stevens referred to another earlier dissent in fashioning the majority in 2002’s Atkins v. Virginia, which measured whether cruel and unusual punishment of the mentally disabled violates the Eighth Amendment.

He did so by comparing it with his joint dissent in Gregg v. Georgia, the 1976 case that reinstated the death penalty.

“Exempting the mentally retarded from that punishment will not affect the ‘cold calculus that precedes the decision’ of other potential murderers. Indeed, that sort of calculus is at the opposite end of the spectrum from behavior of mentally retarded offenders.”

Stevens had a “unique role re capital punishment,” Amann says. “Because he played a role in restoring it in 1976, he ultimately decides based on his experience that it’s not possible for it to be administered without arbitrary decision-making.”

In a 2007 interview in the New York Times, Stevens beckoned reporter Jeffrey Rosen to look back at a 1970 dissent he wrote in a recounting case before the U.S. District Court for the Southern District of Indiana. “I had it very much in mind,” he told Rosen, “when I wrote [Bush v. Gore].”

In Hartke v. Roudebush, Stevens said it was inadvisable for a federal court to stop the state from recounting votes:

“Regardless of whether or not we agree with the Indiana trial court’s construction of Indiana law (and we should not substitute our interpretation of state law for his), we still must decide whether a federal court should enjoin a recount of votes cast for the office of United States senator pursuant to state election laws. No federal court has ever done so before.”

Few dissents drew as much indignation as that in Bush v. Gore. In his closing paragraph, Stevens aimed his invective at the court’s removing the recount from the Florida judges’ hands:

“It is confidence in the men and women who administer the judicial system that is the true backbone of the rule of law. … Although we may never know with complete certainty the identity of the winner of this year’s presidential election, the identity of the loser is perfectly clear. It is the nation’s confidence in the judge as an impartial guardian of the rule of law.”

“It was a significant decision simply because of the energy and emotions he showed,” says Amann.

Ultimately, that brings Stevens to Citizens United v. Federal Election Commission, the controversial ruling announced in January that eliminated barriers to what corporations may contribute to elections. The case combines politics, electioneering and campaign ma chinery—all of them evoking a part of Stevens’ upbringing. He poured his soul into nearly 90 pages of dissent, which he read painstakingly from the bench. Observers say that his 20-minute rant seemed to stumble, and that Stev ens lost his place at times.

Yet the opinion reads like biblical prophecy, warning the court that it was violating the ancient principles of the very Constitution it claimed to be uplifting.

“The phrase that came to my mind was that this was a swan song,” Thai says. “His voice really comes out in election cases.”

Stevens warns about overlooking stare decisis, about disregarding Congress; and he flails Justice Antonin Scalia for a mistaken reliance on originalism, Scalia’s own guiding philosophy.

“The majority opinion is essentially an amalgamation of resuscitated dissents. The only relevant thing that has changed … is the composition of this court.”

A recognition that times had changed emerged as part of his wistful dissent in 2007’s Parents Involved in Community Schools v. Seattle School District No. 1: “It is my firm conviction that no member of the court that I joined in 1975 would have agreed with today’s ruling.”

This view that the court has moved away from Stevens and his steadfast principles was bound to take its toll.

“It’s what made him take off the gloves” in Citizens United, Thai says. “He feels like time and the courthouse have passed him by. While he can try to school the current court, he has lost the desire to.”

More about Justice Stevens in the ABA Journal:

A Man of Moderation