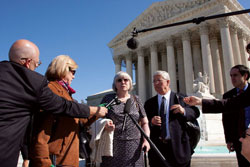 Cheryl Perich and attorney Walter Dellinger talk to reporters outside the Supreme Court after oral arguments were given last October. Americans United photo by Maria Matveeva.

A Catholic school art teacher who volunteers on Sundays to distribute communion might be allowed to file a discrimination action against her employer. But if the teacher also hands out communion at school Masses, that might change her status and allow the First Amendment’s ministerial exception to bar the complaint.

Or maybe not. That’s one of the key questions still facing employment lawyers as the U.S. Supreme Court completes its 2012 term.

“My takeaway is that all the secular activity in the world is not going to outweigh a small amount of preaching,” says Darcie Brault, a Royal Oak, Mich., plaintiffs employment lawyer. “It did give me a little hope that if a church gave a completely nonreligious reason for firing a minister, that might somehow weigh in.”

Hosanna-Tabor marked the first time the Supreme Court considered the ministerial exception in an employment discrimination case. Yet the decision gives few bright lines to determine how lay employees at religious institutions should be classified.

Perich was a “called” teacher, a Missouri Synod term that refers to an instructor being called to a vocation by God. To achieve that rank, she had to complete academic course work that included theology. Her official title was “minister of religion, commissioned.”

When Perich returned to work after a seven-month disability leave, school officials had misgivings about her ability to perform her duties; she was asked to resign and refused, and made it clear she intended to assert her legal rights. Shortly after, Perich was fired. In response to a retaliation claim the Equal Employment Opportunity Commission brought on Perich’s behalf, the church maintained that its teachings hold Christians should resolve their disagreements internally.

In the majority opinion, Chief Justice John G. Roberts Jr. said there was no “stopwatch method” to determine who is covered by the ministerial exception in employment cases.

“The interest of society in the enforcement of employment discrimination statutes is undoubtedly important,” Roberts wrote. “But so too is the interest of religious groups in choosing who will preach their beliefs, teach their faith, and carry out their mission.”

A ministerial title by itself does not automatically qualify someone for the exception, Roberts wrote, acknowledging that the court was reluctant to adopt a “rigid formula.” But the majority did note that Perich had a title, and she used it for a tax credit limited to ministers.

According to Douglas Laycock, a University of Virginia law professor who represented the church and school, the Supreme Court would have likely reached the same conclusion if Perich were a lay teacher. He says he was surprised the opinion was unanimous and thinks its lack of direction may have been a concession for the agreement.

“I think one of the issues that will come up is whether the responsibility given to lay teachers is necessarily religious,” says Garry G. Mathiason, chairman of the law firm Littler Mendelson. Religious employers, says the San Francisco lawyer, should consider running audits to determine which employees are ministers, providing support for their reasoning.

If churches try to use the ministerial exception as an excuse for avoiding compliance with anti-discrimination laws, according to Mathiason, courts will likely suspect their classifications entirely.

“I would probably advise being more conservative when determining who would fall under the ministerial exception,” he says, “and what you get in exchange for that is a higher probability that the exception will apply.”

It’s hard to imagine a school that focuses on religion would hire a principal of a different faith, Laycock says. It seems more plausible if a church-owned school is focused on academics, he adds, in which case it would be hard to argue the principal functioned like a minister.

Also, he notes that the opinion is limited to employment discrimination cases, so concerns about lawsuits against churches for other questionable firings are probably unfounded.

Marci Hamilton, a professor at the Benjamin N. Cardozo School of Law, submitted an amicus brief on behalf of various groups to preserve the legal rights for children molested by clergy. When the court heard Hosanna-Tabor, she had a cert petition pending in Doe v. Archdiocese of St. Louis that challenged a Missouri Supreme Court position that courts can’t question how the church supervises its clergy. The petition was denied on March 19.

“We express no view on whether the exception bars other types of suits, including actions by employees alleging breach of contract or tortious conduct by their religious employers,” Roberts wrote.

If a minister were fired for reporting an instance of child abuse, Hamilton says, Hosanna-Tabor would not prevent it from going forward. Likewise, she doesn’t think the court’s finding would cover race discrimination.

‘KIND OF A SLIPPERY SLOPE’

Some suggest the courts should carve out an exception for race discrimination. Others fear doing so would put courts in a position of judging a religion’s worship.

“It’s kind of a slippery slope. And what about gender?” asks Howard Friedman, an emeritus law professor at the University of Toledo who writes the blog Religion Clause. He mentions Bob Jones University v. United States, a 1983 Supreme Court case. It found that the First Amendment does not prohibit the Internal Revenue Service from revoking a group’s tax-exempt status when its practices are contrary to a compelling public policy.

Also, Friedman adds, few if any organized U.S. religions advocate racial discrimination. He says that the majority in Hosanna-Tabor noted that Perich played an important role sharing the synod’s faith with its next generation.

“For example, what about a Jewish day school with a kosher cook in the cafeteria?” Friedman asks. “In fact, they are furthering the tenets of the religion. I would assume they are not covered by the ministerial exception, but I don’t know.”