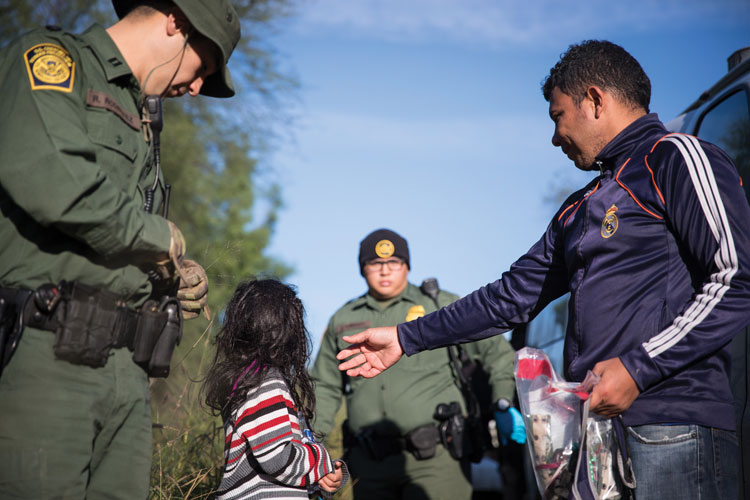 Border Patrol agents intercept immigrants who tried to enter the U.S. after crossing the Rio Grande River in McAllen, Texas, in November. Photo by Ozzy Trevino/U.S. Customs and Border Protection

Stephen N. Zack knows firsthand how tough it is on kids to be separated from their parents. When he was 13, his family tried to flee Cuba—and got taken off a plane by a Cuban spy agency. Each member of the family was held in a separate room overnight. They would be reunited the next morning and eventually permitted to leave Cuba, but he didn’t know that at the time.

“It was for a very short period of time, [but] it was tremendously painful,” says Zack, who went on to become president of the ABA in 2010-11, president of the American Bar Endowment and a partner at Boies Schiller Flexner in Miami. “We didn’t know whether we’d ever see each other again.”

That’s one reason Zack started pushing for the ABA to increase its pro bono work with asylum seekers and separated immigrant families. During the 2019 ABA Midyear Meeting in Las Vegas, the ABA’s Board of Governors approved a one-time American Bar Endowment Opportunity Grant of $150,000 from the ABE to the Commission on Immigration.

The money is expected to fund the hiring of a pro bono coordinator to manage what Zack hopes will be many new volunteers.

Having counsel makes an enormous difference in immigration court, Zack says. A study in New York found that when nonjailed immigrants aren’t represented, only 13 percent win their cases. With representation, the success rate shoots up to 74 percent. (Both rates are lower for immigrants held in detention.) Even if the immigrant doesn’t have a case to stay, Zack says, representation will help get that case finished sooner and more cheaply.

“I woke up thinking about it and called Bob Carlson and Judy Perry Martinez and said, ‘We can do something about this,’ ” says Zack, naming the current ABA president and president-elect. “We have lots of resources if we get people out of their silos to resolve these issues.”

The issue is also personal to Carlson.

“Last summer, I joined with other ABA volunteers on the border in Texas,” Carlson says. “We spent several days working pro bono with detained people who were seeking asylum. It was an emotional experience. I can tell you firsthand that there are a lot of people there—men, women, children, families—who are escaping life-threatening violence at home and who desperately need legal counsel. Most unaccompanied minors and asylum seekers do not have lawyers to help them, and that often makes the difference between being able to stay in the U.S. and being deported.”

Zack envisions mobilizing a lot of different arms of the ABA whose lawyers are well-placed to help. In addition to the Commission on Immigration, he says the Senior Lawyers Division can contribute experienced lawyers who have the time to give back, and the Commission on Hispanic Legal Rights & Responsibilities may have an interest in the subject matter.

“Our paid staff at ProBAR in Texas and the Immigrant Justice Project in San Diego do incredible work in difficult circumstances, but they need help,” Carlson says. “I’m a strong believer in the power of pro bono work to change lives—clients’ lives, of course, but also lawyers’ lives. I’m grateful to the American Bar Endowment for helping us hire a coordinator of pro bono volunteers to assist unaccompanied minors and asylum seekers who are looking for a better life.”

Zack is also hoping that the Hispanic National Bar Association, in which he’s been active, could help with translators so that attorneys aren’t discouraged by a language barrier from volunteering.

Although immigration currently is a key political issue, Zack says this is not a political move but an attempt to meet a humanitarian need.

“It happens to be the major humanitarian issue facing the country right now,” he says. “And this doesn’t have anything to do with whether you like the wall or don’t like the wall. There are thousands and thousands of people waiting for due process.”

This article was published in the April 2019 ABA Journal magazine with the title "Border Backup."