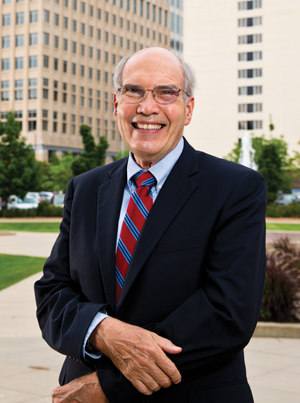 Legal education is more than teaching students how to think like lawyers, Neil Hamilton says: They should graduate with a sense of how to act like one, too, in a way that works for them individually.

As an ethics professor at the University of St. Thomas School of Law in Minneapolis, Hamilton has developed a professional identity curriculum to help students think about what they might want from careers, focusing in part on what they can do during law school to have rewarding work after graduation. And each summer the school’s Holloran Center sponsors workshops for other law school professors about teaching professional identity formation.

“When we talk about professional identity, it’s not just about being rational and analytical. It’s also about holistic engagement, and how you build relationships with clients and others in the legal system based on trust,” says Hamilton, who co-directs the Holloran Center, which focuses on legal ethics.

For the most part, law schools use the curriculum during the first year. At St. Thomas, which refers to the classes as the “roadmap process,” the learning includes personality assessments. Students meet with career coaches to discuss what sorts of careers interest them and how they can start pursuing that work in law school. Successful lawyers come in to talk about personal learning experiences, and many mention problems they encountered.

“Our students hear stories about people making mistakes, owning them and overcoming them,” says Hamilton. That’s unlike more traditional law school courses, he adds, where students are taught they should never make mistakes—and if they do, it could be the worst thing that ever happens to them.

Not everyone is on board with professional identity courses, Hamilton admits, but many law professors are warming to the idea as it’s increasingly seen as a way to teach social intelligence, which seems to bring more job opportunities for young lawyers. So far, 124 faculty and administration members from 28 law schools have taken the classes.

Jerry Organ, a St. Thomas professor and co-director of the Holloran Center who teaches some of the courses, knows why. “The difference is that the class of 2015 worked through the roadmap for employment within their professional responsibility course,” he says, “and we helped coordinate better the messaging among the various courses directed toward professional formation and the search for meaningful employment.

“We had made an assumption that all the things we were doing would translate into what it means to be a lawyer and how to get a job,” he says. “We realized we needed to do more to help them connect the dots a bit.”

Santana Royer, a student at the University of North Dakota School of Law, took a professional foundations course taught by Michael McGinniss. Before the class she thought she needed to memorize every case in all of her books. All the studying was making her dizzy, she realized during the course, and her personal relationships felt the strain.

“I learned that I needed balance, and there’s a way to get good grades in law school and have time for yourself,” says Royer, who expects to graduate in 2018. “The class taught us how to be self-reflective and make sure that we check in with ourselves, which will be super helpful when we’re actually lawyers.”

Students in McGinniss’ course work in small groups discussing things like client relationships and writing reflective essays. Lawyers, he says, all have setbacks, and he hopes his students have less anxiety about that after they take his course. He helped coordinate the curriculum in 2014, and the next year went to the Holloran Center to share his experiences with other professors.

“I want [students] to develop a habit of engaging in self-reflection before they act,” says McGinniss, who previously served as the Supreme Court of Delaware’s disciplinary counsel. “This includes recognizing when a particular decision is, in fact, a significant one, and warrants taking a step back to self-reflect for some time before forming a judgment about how to act.”

During his course, it’s not uncommon for students to change their career plans. That includes Royer, who came to law school thinking that she’d do family law. A former domestic violence advocate, she now wants to do nonprofit work. Inspiration came from a legal aid lawyer who spoke to her class.

This article originally appeared in the September 2016 issue of the ABA Journal with this headline: “What’s Your ID? Program helps profs teach students how they can be the lawyers they want to be.”

“What’s your ID?” (September, page 28) should have stated that only students from the University of St. Thomas School of Law's class of 2015 took courses related to the school’s “roadmap process." Students in the class of 2012 did not take them.