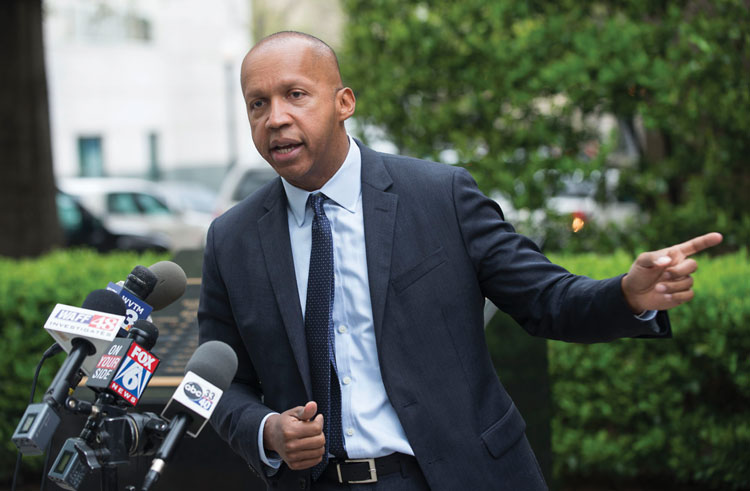 How has your work shaped you over the years?

I’ve learned a lot about the human condition. I meet people who are condemned, who are described as “the worst of the worst,” who are told they’re not fit to live in our society. My engagement with them has revealed something very different, and it has made me a believer in the notion that we’re all more than the worst thing we’ve ever done.

How much has the situation improved over the years?

We’ve made progress on some of the substantive issues—we no longer execute children or people with an intellectual disability. We won bans on lifetime parole for kids. A lot of things have improved, but we still have a lot of work to do. Our criminal justice system is still excessive and harsh and punitive in ways that can’t be justified. We still have a system that treats you better if you’re rich and guilty than poor and innocent. Error and unreliability are still characteristics of our system that require immediate reform.

If you could change one thing right now, what would it be?

If I could change just one thing, the first thing I would do is make an assessment of whether everyone in jail or prison is a threat to public safety and get everyone out who isn’t a threat. We have increased spending on jails and prisons from $6 billion in 1980 to $80 billion today. So much of that money is wasted on incarcerating people who don’t need to be incarcerated. We could use that money to actually improve public safety, to prevent crime, to provide services to people who have been victimized. We could do so much more to improve the health of our communities, and this gratuitous, unnecessary, excessive punishment would no longer be an issue.

Who have been the major influences on your life?

I’m a product of the civil rights movement, and so I’ve always been inspired by people like John Lewis, and I had the privilege of knowing Rosa Parks when I was a young lawyer. She influenced me greatly. Steve Bright is a lawyer in Atlanta who persuaded me to get into this work. There are also nonlawyers—people like my mother, who just believed in the power of education and information as a foundation on which change can come.

Which cases are you most proud of or have had the most impact on improving the situation?

Every case we do is so vital and so important. The work we’ve done for children has had broad implications. I’m sort of like Thurgood Marshall in that sense. When he was asked which was the most important case he had ever done, he would always say “the next case.” It’s so important for me to keep looking forward to what else needs to be done and what I can do that I don’t spend a lot of time looking backward.

Which cases are on the front burner right now?

We have a case before the Supreme Court on executing people with dementia, Madison v. Alabama. I am really concerned about how we’re treating the mentally ill in our criminal justice system. There are many people with severe disabilities whose disabilities can’t be considered by law because of mandatory sentencing. We have the ADA that we enforce in private places, but we don’t enforce it in the criminal justice system. That’s cruel and unusual punishment. It’s cruel to sentence someone because he is disabled and unusual to have these protections for the disabled that we don’t employ in the criminal justice context.