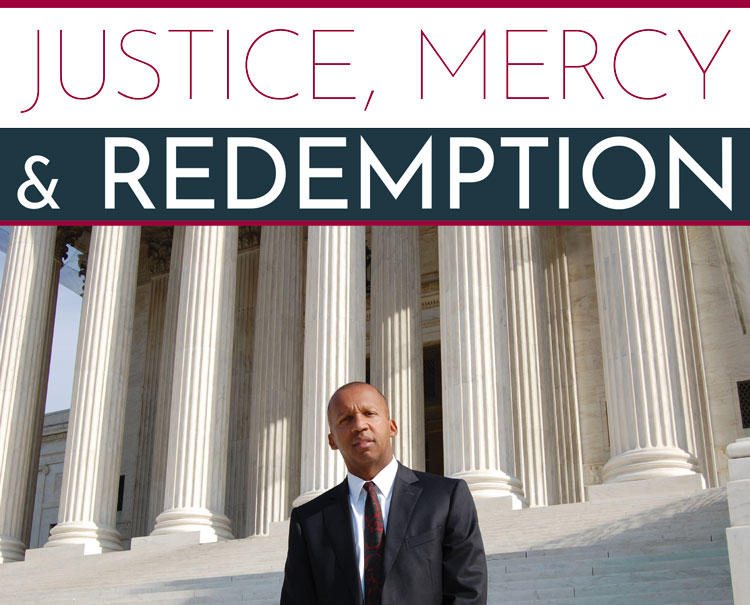 There’s a saying in the criminal defense bar: There’s nothing more frightening than having an innocent client.

Judging by that standard, you’d think Bryan Stevenson must have been scared out of his wits for the last three decades—but no. It takes a lot to rattle the Harvard-educated attorney, 58, who has won relief for more than 125 people on death row. Success has meant getting a new trial, a reduced sentence or, best of all, complete exoneration. In the latter case the client walks out of prison, sometimes after decades of incarceration, for a crime they did not commit. Invariably they find Stevenson waiting outside the prison gate with arms outstretched.

Former Alabama death row inmate Anthony Ray Hinton experienced that when Stevenson got his conviction overturned in 2015. He says he remains baffled at how Stevenson won his freedom.

“Some people called it a miracle. I like to say that God sent me his best lawyer, his No. 1,” says Hinton. “In almost 30 years on death row, I never saw a lawyer with so much dedication and humanity and such a sharp legal mind, and I’ve never heard of one from another inmate.”

Hinton describes his relationship with Stevenson as “pure respect for one another.” He adds, “Just being around him makes me feel smarter. He believes in me, sometimes more than I do. Who would have thought I’d get out of prison and write a book?” (Hinton’s book, The Sun Does Shine, recounts his life on death row.)

His 16-year relationship with Stevenson didn’t end when he walked out of prison a free man. Long-term inmates face huge challenges when they try to reintegrate into society, even with things most people consider second nature.

“Mr. Stevenson had people teach me how to use a phone. He sent lawyers with me to help me get my Social Security card,” Hinton says. “Now I have choices, and sometimes I don’t know what to do. He helps me make the right decisions.”

Hinton has since landed a job as a community educator at the Equal Justice Initiative, a nonprofit organization Stevenson founded in Montgomery, Alabama, in 1989. Its mission is to end mass incarceration and excessive punishment in the United States, to eradicate racial and economic injustice, and to protect basic human rights for the most vulnerable people in American society. 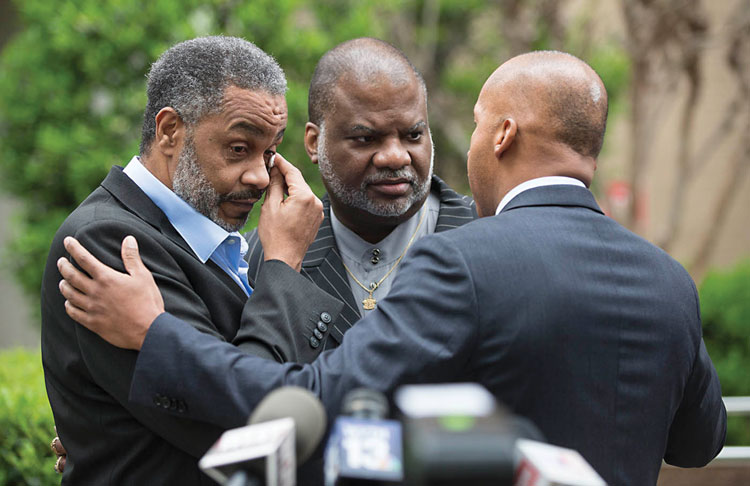 Anthony Ray Hinton and his friend Lester Bailey with Stevenson. Bailey visited Hinton on death row throughout the nearly 30 years of his incarceration. Photo by Bernard Troncale.

Stevenson, who shares his story in his best-selling book, Just Mercy, and through talks around the country, is scheduled to deliver a keynote address at the ABA Annual Meeting in Chicago on Aug 4. Stevenson also will be awarded the association’s highest honor, the ABA Medal, given to lawyers who have “rendered conspicuous service to the cause of American jurisprudence.”

In addition to his legal work for the EJI, Stevenson is passionate about educating the world about injustice and inequality. He was the force behind the creation of the National Memorial for Peace and Justice, honoring more than 4,000 victims of lynching, which opened in Montgomery in April. “These kinds of projects are very energizing and affirming,” he says.

Despite the heavy responsibilities of the work and the serious nature of his mission, Stevenson has a lighter side, as well. Sia Sanneh, a senior attorney at the EJI who has worked with Stevenson for 10 years, says he has a “deep and wonderful sense of humor. You can’t do the work we do and survive it, let alone be a leader, without being able to find the absurdity in the situations we face. It goes from the highest of the highest—seeing a client walk out of prison after spending most of his adult life incarcerated—to the lowest of the low, when a client is executed or killed in prison.”

When they were driving to a hearing in the Hinton case, Sanneh says, she could see the toll it took on Stevenson. “We were losing in every court in Alabama. It was maddening because we had [exculpatory] evidence,” she says. “He remained hopeful, as always, but he said, ‘What we know is that we could lose because so many things are out of our control.’ Fast-forward 10 years and we win the case.”

It was a long, weighty decade for Stevenson and Hinton, but you’d never know it if you saw the two of them together now, says Sanneh. “If we hear laughter down the hall, we know Mr. Hinton’s here.”

Darlene Ricker is a legal affairs writer based in Lexington, Kentucky. She is a former staff writer and editor for the Los Angeles Times and the Boston Globe.

This article was published in the August 2018 ABA Journal magazine with the title "Justice, Mercy & Redemption: Bryan Stevenson, founder of the Equal Justice Initiative, has learned you can’t change the world without some discomfort or inconvenience."