How is 'amicus' pronounced? Justice Breyer and Judge Jackson disagree with each other and the majority view 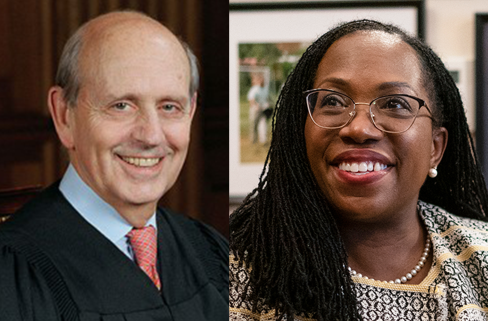 Judge Ketanji Brown Jackson was once a law clerk for the justice she will replace, U.S. Supreme Court Justice Stephen Breyer, but she didn’t adopt his pronunciation of “amicus.”

“Amicus” is a shortened version of “amicus curiae” briefs, which translates to friend-of-the-court briefs.

Breyer’s pronunciation is British, which isn’t surprising, given his marriage to the daughter of a British viscount (according to a 1994 story by the Washington Post). The Marble Palace Blog recalled a 1997 Supreme Court argument when an “accommodating” solo practitioner parroted Breyer’s pronunciation.

Bryan A. Garner, editor-in-chief of Black’s Law Dictionary and an ABA Journal contributor, wrote about the pronunciation of “amicus curiae” at his LawProse blog.

“The traditional and predominant pronunciation is /uh-MEE-kuhs KYOOR-ee-I/,” Garner wrote. “But in certain parts of the country, the shortened amicus often takes on the pronunciation /AM-i-kuhs/. This is thought by some to be an error, but many cultured judges say it that way. Branding the variant pronunciation an error would be silly and pretentious. Many lawyers vacillate between the two in daily speech. But if the full phrase is used, then /uh-MEE-kuhs/ is certainly preferred, perhaps even de rigueur.”

Garner also commented when William Safire of the New York Times ran a story on Breyer and the lawyer who adopted his pronunciation, according to Law.com’s Marble Palace Blog.

“Justice Breyer has adopted an Anglo-Latin pronunciation,” Garner told the New York Times, according to Law.com’s Marble Palace Blog. “It will make any Latin teacher apoplectic. But it has English and American history behind it, and that, in the end, matters more than how Cicero might have mouthed the phrase.”

ABAJournal.com: “How is ‘certiorari’ pronounced? Even Supreme Court justices disagree”