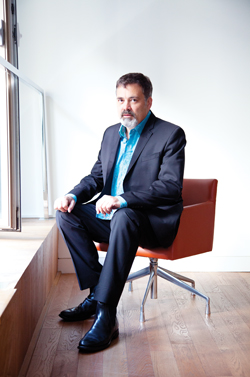 Internet piracy of copyrighted works may no longer be novel, but that doesn't mean it's any less prevalent. According to the Recording Industry Association of America, since peer-to-peer file-sharing emerged in 1999, music sales in the U.S. have dropped 53 percent—from $14.6 billion to $7 billion in 2013. And the Motion Picture Association of America cites a study, based on a survey of 20,600 consumers conducted in 22 countries in 2005, revealing that Internet piracy costs movie studios in excess of $6 billion a year.

(Some entertainment analysts question whether those figures represent piracy or consumers spending their money elsewhere.)

Christopher Sabec is a former entertainment law attorney who has represented the Dave Matthews Band. He also takes credit for discovering and managing the band Hanson. And in 2000, he was hired by the estate of Grateful Dead guitarist Jerry Garcia to manage businesses spun from Garcia's intellectual property.

"The Garcia business was a five-year project, and when I went to get back in the music business, I found it had been decimated by piracy," Sabec says. He began sharing notes with technologist Robert Steele—now chief operating officer and chief technology officer of Sabec's new business—and they came to a conclusion: "We can solve this problem."

The duo founded Santa Monica, California-based Rightscorp Inc. in 2011, and as of Sept. 30, it had settled more than 130,000 cases of copyright infringement.

Using proprietary "crawler" technology to monitor file-sharing networks, Rightscorp identifies illegal downloaders of its clients' copyrighted works. It sends an email to the downloader's Internet service provider alerting the ISP of each instance of copyright violation. The ISP is then asked to send the infringement notice to the downloader.

Rightscorp seeks a settlement from the downloader, as low as $20 for each instance—what Sabec calls the "traffic ticket model"—from which Rightscorp takes a share and sends the rest to the copyright holder. As of Sept. 30, the company had grossed more than $1.1 million in revenue, Sabec says.

Rightscorp says its model for punishing violators is a "reasonable settlement option when compared to the legal liability defined in U.S. copyright law." Sabec says Rightscorp works with more than 150 ISPs, including five of the top 10 in the U.S.

Asked what happens if the ISP does not forward the violation of copyright notice to the infringer, Sabec says: "We believe that ISPs are under an obligation to terminate service to repeat infringers under Section 512(i) of the Digital Millennium Copyright Act" and "by sending our notices, they are able to warn repeat infringers that they will be terminated if they continue. By making the settlement payment, [the infringers] are removed from our weekly list of repeat infringers we send to the ISPs."

Sabec says a line of cases decided under the DMCA makes it clear that ISPs can't "interfere with enforcement" and must have a procedure in place for the "termination of repeat offenders." He says, "We get repeat infringers terminated every day," but also says he doesn't know how many downloaders who ignore the violation notices have been suspended from their provider.

"We set out to develop a process that allows us to implement existing law and hold ISPs accountable for violations of Section 512(i)," Sabec adds. Rightscorp's activities have not won it many fans on the Internet. Mitch Stoltz, an attorney with the Electronic Frontier Foundation, takes a dim view of the business. "They claim to be using a secret, superproprietary technology to identify violators, which sounds like a sales gimmick," Stoltz says.

Stoltz says that Rightscorp is making "unwarranted and incorrect assumptions" about the requirements of the DMCA. Sabec disagrees with the EFF, which he says believes "we just have to get the property model out of the picture."

Asked to distinguish the service provided by Rightscorp from that provided by the largely discredited Prenda Law, Sabec says, "We recognize that there are companies out there that use lawsuits against subscribers as a starting point. ... That is the opposite of our model; we initiate contact through ISPs, asking those who have infringed to pay a very reasonable amount in compensation for a property right infringement. Our objective is to recoup some losses suffered by our clients and to simultaneously incentivize subscribers to cease illegal activities."

The RIAA refused comment, except to verify piracy figures. The MPAA did not respond to email and phone inquiries.

This article originally appeared in the December 2014 issue of the ABA Journal with this headline: "Piracy Patrol: Rightscorp 'tickets' copyright infringers—to the dismay of some."