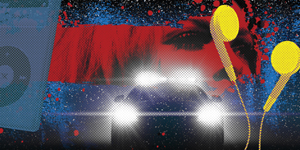 Last summer I attended an intensive, weeklong postgraduate writing workshop at Vermont College for Fine Arts given by the novelist and memoirist Andre Dubus III (House of Sand and Fog and Townie).

Not surprisingly, of the six participants I was the only lawyer. We met daily to discuss our writing. Dubus supplemented the workshop critiques with writing exercises. He would read a brief poem focusing primarily upon a single sensory perception (sound, taste, smell, physical sensation or vision) and then have us write, spontaneously, about that sensation based upon our experience of the world. We would then read our writing aloud, often uncomfortable about revealing our unedited responses. The spontaneous revelations of subjective perceptions and sensory experiences were emotionally and psychologically compelling.

Consider Joan Didion’s “The White Album,” a first-person nonfiction essay about the aftermath of the Manson murders in Los Angeles in 1969. The essay presents a collage of sensory shards and fragments—scents, tastes, sounds, images—that draw readers into a dangerous subjective landscape recalling the consciousness of those long-ago times. Here is a brief excerpt from a longer paragraph that begins one section of the essay:

“We put ‘Lay Lady Lay’ on the record player, and ‘Suzanne.’ We went down to Melrose Avenue to see the Flying Burritos. There was a jasmine vine grown over the verandah of the big house on Franklin Avenue, and in the evenings the smell of jasmine came in through all the open doors and windows. I made bouillabaisse for people who did not eat meat. … But there were odd things going around town. There were rumors. There were stories. … A demented and seductive vortical tension was building in the community. The jitters were setting in. I recall a time when the dogs barked every night and the moon was always full. On Aug. 9, 1969, I was sitting in the shallow end of my sister-in-law’s swimming pool in Beverly Hills when she received a telephone call from a friend who had just heard about the murders at Sharon Tate Polanski’s house on Cielo Drive. … I remember all of the day’s misinformation very clearly, and I also remember this, and wish I did not. I remember that no one was surprised.”

Quinnipiac University law professor Neal Feigenson, in a book-in-progress on the theme of “experiencing other minds in law,” explores and dissects how creative trial lawyers are directly integrating sensory experience and subjectivity into courtroom storytelling practice. These lawyers are going beyond words and employing photos, videos, animations and sound files to re-create litigants’ subjective sensory perceptions for judges and juries.

For example, in Janson v. Jdorap Inc. (2011), a negligence case, the plaintiff was checking the bolts on a wheel that a custom auto shop had sold him when the tire exploded, hurtling him back against a wall. The most serious injuries were to his hearing: partial hearing loss, hyperacusis (extreme sensitivity to sound) and severe tinnitus.

To help prove pain and suffering damages, the plaintiff’s lawyer had the audiologist who performed the standard battery of hearing and tinnitus tests on his client prepare digital sound files that purported to simulate the tinnitus sounds the plaintiff was hearing inside his head.

The audiologist created six digital sound files, corresponding to the sounds the plaintiff claimed to hear in each ear at each of three frequencies, based on the audiological test data. The sound files were loaded onto an iPod. Feigenson writes: “At trial, during the audiologist’s testimony, jurors took turns putting on headphones and listening to the sounds: all variously high-pitched, some grating, others piercing, all headache-inducing, some even painful. During deliberations, two of the jurors listened to the sounds again. Ultimately, the jury awarded the plaintiff over a million dollars in damages for permanent acoustic injury and pain and suffering, largely for his tinnitus.”

This lawyer used a piece of demonstrative evidence to convey the plaintiff’s subjective sensory experiences directly to the jury. What might otherwise have seemed relatively modest injuries as identified (e.g., sounds that jurors might well perceive as akin to the tinnitus, partial hearing loss and hypersensitivity to sound that often accompany aging) became vivid when translated into an evidentiary simulation. The sound files enabled jurors to more fully comprehend the plaintiff’s internalized sensory experience—and with it the extent of his suffering. The success of the admissible simulation was implicit in the size of the jury award.

The case isn’t unique. Feigenson documents several cases in which simulations—some created by or on the basis of testing by clinical professionals, others entirely by visual consultants—effectively supplemented testimonial evidence, depicting sensory experiences for the jury from the plaintiff’s “subjective” perspective.

The use of simulations isn’t limited to issues of damages in civil cases. In a previous work, Law on Display, Feigenson and colleague Christina Spiesel analyzed a simulation employed in a criminal case that went directly to the issue of a defendant’s guilt or innocence. In State v. Murtha (2006), the defendant, a police officer, had pursued another driver in his cruiser until that driver stopped his car in a snow bank at the side of the road. As the officer got out of the cruiser and approached the other car, the suspect pulled back onto the road and began to speed away. The officer fired several shots at the driver’s side window, striking and injuring the driver. Charged with first-degree assault, the officer claimed he believed he needed to use deadly force to defend himself because he reasonably—but mistakenly—believed the driver was headed straight toward him when he first pulled back onto the road.

Feigenson and Spiesel describe the simulation created by the officer’s lawyer and a professional litigation consultant as a hybrid display consisting of both video and animation, translating the defendant’s testimony into visual form and vividly conveying the officer’s sensory perceptions of the events as they appeared to the officer’s subjective perspective:

“[The display] begins with a clip from the surveillance video [taken by the dashboard camera of the trailing police cruiser] as the camera approaches to within perhaps 20 feet of the defendant’s cruiser, which is stopped with its lights flashing, and the suspect’s car, stopped in the snow on the side of the road. As the suspect begins to pull back onto the road, the action ‘freezes’ and the video turns into an animation. … The virtual camera’s (and the viewer’s) point of view rises up and rotates to the left around [the officer’s] cruiser, coming to rest behind a digital Officer Murtha as he stands, outstretched arm holding his gun, confronting the car. The viewer is now just behind Murtha, sharing his point of view in the crucial moment: The bright headlights of the suspect’s car … could, for all that appears, be headed right at us. The animation holds this shot for a moment, then pulls away, up, back and around again to the point of view from the [dashboard] camera, and we see the suspect’s car continue down the road, away from [the officer and the viewer].”

The simulation was admitted and successfully conveyed the officer’s subjective perceptions of the events. The jurors accepted as reasonable the way he perceived and reacted to the events, and they acquitted him.

The use of artfully created simulations like these has become a powerful storytelling tool at trial, directly conveying subjective sensory perceptions in a way that witnesses—who seldom, if ever, possess Didion’s language-based artistry—are ill-equipped to do via testimony alone.

This article originally appeared in the June 2015 issue of the ABA Journal with this headline: “The Art of Simulation: Savvy trial lawyers help jurors perceive witnesses’ stories by creating sensory experiences.”

Philip N. Meyer, a professor at Vermont Law School, is the author of "Storytelling for Lawyers."