SCOTUS ruling may enliven the debate over affirmative action 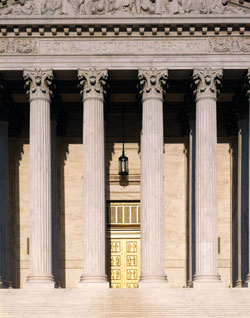 Schuette v. Coalition to Defend Affirmative Action: The case said that state voters may choose to prohibit the consideration of racial preferences in governmental decisions, in particular with respect to school admissions. Photo courtesy of Flickr Creative Commons.

After several minutes, Chief Justice John G. Roberts Jr. addressed Michigan’s lawyer. “You have been asked several questions that refer to the ending or termination of affirmative action,” Roberts said. “That’s not what is at issue here, is it?”

“No, and I’m glad you brought that up,” said the lawyer, John J. Bursch, who was happy to guide the discussion back to the legal issues presented by Schuette v. Coalition to Defend Affirmative Action.

The actual issue before the justices was whether the state’s voters had violated the 14th Amendment’s equal-protection rights of racial minority members when they enacted the state constitutional prohibition on considering race in admissions.

On April 22, the justices delivered a 6-2 judgment (PDF) that upheld Michigan’s ban on the use of race in college admissions. In a plurality opinion announcing the outcome, Justice Anthony M. Kennedy harkened back to the oral arguments by saying it was “important to note what this case is not about.”

“It is not about the constitutionality, or the merits, of race-conscious admissions policies in higher education,” he said.

Treading carefully through the court’s recent decisions on race in education, Justice Kennedy noted that just last term, in Fisher v. University of Texas at Austin (PDF), “the court did not disturb the principle that the consideration of race in admissions is permissible, provided that certain conditions are met.” (The court sent the challenge by a white applicant, Abigail Fisher, to that university’s race-conscious admissions plan back to a federal appeals court for closer scrutiny.)

Justice Kennedy said the Schuette case was about “whether, and in what manner, voters in the states may choose to prohibit the consideration of racial preferences in governmental decisions, in particular with respect to school admissions.”

His answer, joined by the chief justice and Justice Samuel A. Alito Jr., was that a state could do that because there was no authority for the federal courts to set aside the will of a state’s voters. 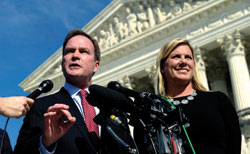 Reaction to the decision ranged from the extreme—the head of the group that challenged the Michigan ballot initiative called the ruling “racist”—to one of caution.

Shanta Driver, the national chairwoman of the Coalition to Defend Affirmative Action, Integration and Immigrant Rights and Fight for Equality By Any Means Necessary, which challenged the initiative, said in a statement that the decision was “this court’s Plessy v. Ferguson.” Driver, who argued the group’s case before the justices, added: “At the very moment that America is becoming a majority minority nation, this court is declaring its intention to uphold white privilege and to create a new Jim Crow legal system.”

James E. Ryan, a lawyer who is the dean of the Harvard Graduate School of Education, says the decision might give a boost to the movement supporting popular initiatives or legislative efforts to enact similar prohibitions on considering race. Eight states have such bans in place now.

But Ryan, an education law scholar, says the greater significance of the decision is that it is one more piece of the puzzle of racial preferences that have been before the Supreme Court in various forms. “If you keep putting the pieces together,” he says, “it does seem that from the court’s perspective, we’re on the slow path to eliminating race-based affirmative action.”

Kristi L. Bowman, a law professor at Michigan State University and a scholar of education law, says that the decision was unsurprising, and that Kennedy walks a tightrope between upholding the popular will of Michigan voters against racial preferences and his complex view that educational institutions may still take account of race. Any practical effects of Schuette are “complicated by how fractured the decision is,” she says.

Schuette, brought by Michigan Attorney General Bill Schuette, centered on the “political restructuring doctrine,” which considers whether minorities are burdened in the political process. The 6th U.S. Circuit Court of Appeals at Cincinnati struck down Michigan’s ban under this theory. The state ballot measure, which passed 58 percent to 42 percent, had brought about a significant change in the political process because it made it more difficult for minority group members to lobby for preferences, the court said. While others could lobby the state’s college governing bodies for admissions preferences based on legacy status, for example, minorities would have to amend the state constitution to reinstate racial preferences, it said.

Kennedy applied the political restructuring doctrine in his plurality opinion but stopped short of calling for the overruling of the high court’s key precedents in that area.

Justice Antonin Scalia, in an opinion concurring in the judgment that was joined by Justice Clarence Thomas, said he would overrule those precedents. They are Hunter v. Erickson, a 1969 decision that invalidated an Akron, Ohio, ballot measure that had overturned a local fair-housing ordinance, and Washington v. Seattle School District No. 1, a 1982 ruling striking down a state referendum that had prohibited busing for school desegregation.

Justice Stephen G. Breyer was the surprise addition to the majority judgment. He wrote separately to say that he didn’t see the Hunter-Seattle political-process doctrine applying at all. Those cases, he said, involved a restructuring of the process that changed the political level at which policies were enacted.

The Michigan case, by contrast, involves a measure that took decision-making away from an unelected group of college faculty and administrators, who implemented race-conscious admissions policies, and placed it in the hands of voters.

At times, the dissent seemed to reflect deeply personal views of the first Hispanic justice, who has acknowledged being a beneficiary of affirmative action.

“Race matters because of the slights, the snickers, the silent judgments that reinforce that most crippling of thoughts: ‘I do not belong here,’ ” Sotomayor said.

She delivered a pointed answer to Roberts’ oft-quoted statement from the 2007 case of Parents Involved in Community Schools v. Seattle School District No. 1 (PDF).

Sotomayor, who was not on the court in 2007, said in her Schuette dissent that “the way to stop discrimination on the basis of race is to speak openly and candidly on the subject of race, and to apply the Constitution with eyes open to the unfortunate effects of centuries of racial discrimination.”

The chief justice answered her in a short concurrence, saying that “it is not ‘out of touch with reality’ to conclude that racial preferences may … do more harm than good.”

Abigail Thernstrom, a conservative scholar who has written against racial preferences, says the biggest surprise was that Justice Breyer “has discovered the political process.”

“He kept his technocratic impulses in check [and] deserves an award for his newfound appreciation of the proper role of voters in the democratic political process,” says Thernstrom, a former member of the U.S. Commission on Civil Rights.

Edward Blum, the moving force behind Fisher’s challenge to race preferences at the University of Texas, says that while the Schuette decision may bolster the movement to end affirmative action by the political process, that won’t affect private colleges and universities.

Blum says that while the Schuette decision was messy and of limited practical significance, it did “dramatically reinvigorate the debate that the nation is having about the fairness and constitutionality of race-based affirmative action.”

This article originally appeared in the June 2014 issue of the ABA Journal with this headline: “The Future of Race: The Michigan ruling may enliven the debate over affirmative action.”