Secession: How the South Nearly Won 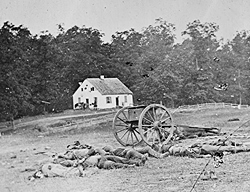 Bodies in front of the Dunker Church in Antietam, Md. (September 1862). Photo by Alexander Gardner (Library of Congress)

The issue at the heart of the Civil War always was slavery. But at the start of the conflict, neither side was ready to acknowledge that reality. In the 11 Southern states that left the Union between December 1860 and June 1861, leaders talked vaguely about the need to preserve the Southern “way of life.” In the North, meanwhile, newly elected President Abraham Lincoln and other political leaders proclaimed—despite rumblings of the abolitionist movement—that the only purpose of a war between the states would be to preserve the Union.

As a matter of law, secession was uncharted ground. The Constitution was silent on the issue, and international law was unsettled. So the real question was not whether states had a right to secede from the Union, but whether they could make their declarations of independence stick in the face of military and diplomatic efforts to bring them back in.

In the international realm, secession is merely a start down the road toward recognition as an independent nation. But there are no clear rules of that road.

Most definitions of an independent state have four elements: a defined territory, a permanent population, a functioning government, and formal recognition by other states. In the early days of the Civil War, the Confederate States of America already possessed the first three elements.

British recognition of a new slaveholding nation seemed improbable, however, because Parliament had outlawed slavery in the British Empire in 1833. But the Union’s blockade of Confederate ports, which cut off Southern cotton exports, changed the situation. The lack of cotton idled the great textile mills in Leeds and Manchester, causing British owners to cry out for intervention by the government.

British leaders also watched with interest as the Union’s war machine sputtered, at least in the Eastern theater, at the First Battle of Bull Run in July 1861 and then in the Peninsular Campaign in the spring of 1862. At one point, a member of Parliament introduced a measure to recognize the Confederate states as “belligerents,” a status under international law that would have required Lincoln to open the South’s ports to British ships.

For his part, Lincoln carefully omitted any mention of a new Southern government in speeches and writings, but a confrontation with Britain over the blockade seemed inevitable.

On Nov. 8, 1861, U.S. Navy Capt. Charles Wilkes stopped the British steamer Trent on the high seas and removed two men who were en route to Britain as Confederate envoys. The seizure of the envoys violated customary international law, potentially giving the British an excuse to declare war against the United States. American public opinion recklessly supported the seizure, but Lincoln saw its potential to help bring victory to the Confederacy. He defused the situation by releasing the envoys. But British saber rattling during the Trent affair kept Lincoln concerned about British recognition until the Union victory at Gettysburg in 1863 turned the Confederacy into a lost cause.

Today, the success or failure of a secessionist movement still is determined largely by the international community. Kosovo, for instance, a tiny region tucked away at the southern edge of Serbia, has been seeking independence since the breakup of the former Yugoslavia in the early 1990s led to conflict throughout the region. Shortly after Kosovo declared independence from Serbia in February 2008, the United States and a number of other countries—including the United Kingdom, France, Germany, Italy, Poland and the Republic of China (Taiwan)—recognized the new nation. But Russia continues to support Serbia’s opposition to Kosovo’s independence, and Kosovo—now recognized by at least 75 nations—still has not applied for membership in the United Nations, the gold standard of national recognition.

The path to national independence is never easy, especially when the process starts with secession. But if the United Kingdom had recognized the Confederacy in 1862, the Civil War might have been a relatively short, bloodless conflict. And the slavery issue might have persisted much longer than it did.